While gamers in the U.S. have had access to this title for quite some time, it was only released as a European download within the past few days.  Why there was such a long delay is unknown, but unfortunately the wait wasn’t really worth it.

Strictly speaking, the ironically named Quick Fill Q might be classified as an endless runner … but it’s so slow moving it’s more of an endless ‘lazy roller’.  You control a pink spherical creature (which you could mistake for Kirby at first glance) named Q.  As Q begins s-l-o-w-l-y rolling along the ground, pits will start to appear.  You need to fill them in by breaking blocks into Tetris type shapes so that you keep on rolling and not fall to defeat.  You need to fill every inch of each pit too, not just the part to be rolled over.  This adds to the games challenge, especially as some shapes just can’t fit initially.  You’ll be forced to set down blocks over several tries, filling in small portions each time.  This might confuse you when encountering a complex pit for the first time, but you’ll quickly learn.  And … well, that’s about all there is to the game actually. 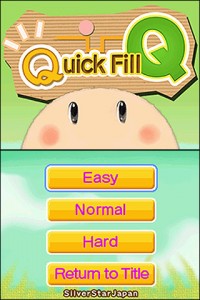 The game has three difficulty modes, but for practical purposes it really is just two.  Easy is much, much too slow (even by the game’s already slow standards) with any increase in speed being very hard to detect.  It drags on for so long that I finally quit, not out of challenge, but out of sheer boredom, and moved up to the next difficulty level.  Honestly, I can’t imagine anyone playing the game on easy until all lives are exhausted, especially as you earn free ones besides.  Even on the hardest setting though, the game still seems far too slow to me, with the increasing size of the holes being the only noticeable thing to mark a jump in challenge.  And even with the higher challenge, it’s still that same basic premise that lacks in staying power.

Graphics in this game would be fine … if there was any variety.  However, nothing ever changes!  The backdrop you roll against is serviceable, but fairly plain, and you’ll quickly get sick of seeing it roll by over and over.  Likewise, the music is ok … but with just the single track I eventually began to grow tired of it and I’m guessing most would feel the same.  The only change occurs if you get too close to a pit where the tune takes on more tense sound.  Now it’s true that as $1.99 eShop game, audio/visual expectations should rightly be set a bit lower, but honestly this game doesn’t even hold up that well even when compared to its other budget contemporaries. 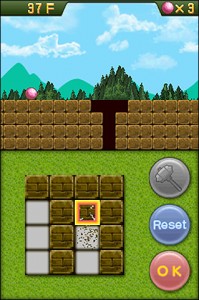 Control wise, the game fares better.  Despite what some reviews have complained about, I found the control in the game to be fine and responsive.  You’re given a choice between using the stylus on the touch screen, or traditional button tapping, and I always welcome choices like this.  The stylus is quicker and easier though, so there really is no need switch.

I was hopeful when I started playing this game, I really was.  The first few minutes were actually fairly fun … but sadly the game quickly turned into a dull affair as it failed to advance, and ultimately couldn’t hold my interest.  I question whether its premise is actually strong enough to build a full game around?  Had this game been quicker, more challenging, or had some (any) type of structure, this potentially could have been a decent time waster.  However, not being fleshed out it’s just poorly executed.   The budget price does make many of its shortcomings a bit easier to swallow, but this game needed some more thought put into it.  While I’m always happy to see games get a wider release, perhaps this is one that should have stayed a U.S. title only.  With so many quality budget releases found in the eShop, Quick Fill Q doesn’t really warrant much time.