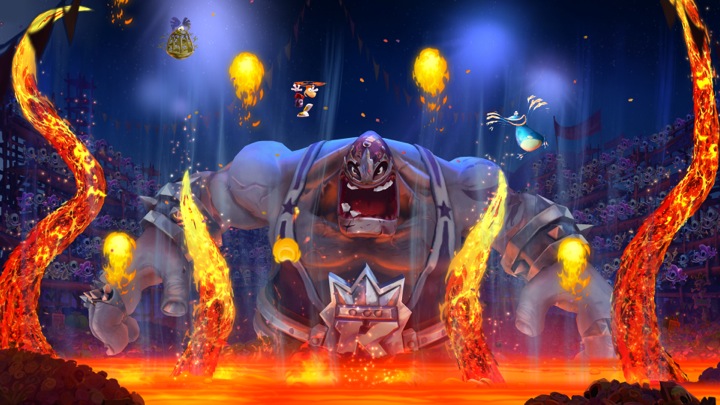 Rayman Legends starts off 100 years after the events of Rayman Origins. Rayman and his friends were sleeping all those years while the nightmares grew in strength. Awakened by Murphy, the crew must once again save the teensies and their world. Rayman Legends is the second game in the Rayman series to use Ubisoft’s UBI art engine. The first game, Rayman Origins, boasted both an incredible art style and fun gameplay. In Rayman Origins, pretty much everything was rendered in 2D. The backgrounds, playable characters, and enemies all were done with beautifully animated 2D graphics. In Rayman Legends, the engine has been enhanced to blend full, 3D rendered environments and characters with the 2D gameplay and graphics of the first game. Don’t worry. The character animations and designs for Rayman and company are still in tact. It’s mostly enemies, bosses, and levels that have received the polygonal treatment. With the added detail and enhanced engine, Rayman Legends certainly raises the bar. 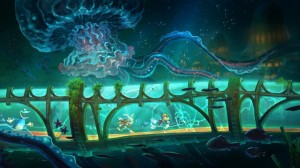 The core gameplay in Rayman Legends is largely unchanged from Rayman Origins. Players must collect lums and free teensies in each level but there are several unique levels added this time around. First off, Rayman Legends features several rhythm levels. Each level has a different song where players’ jumps and punches are timed to the notes throughout the song. The levels require players to be continuously running to keep up with the beat. It requires a few tries at first but it’s a lot of fun. The levels are very similar to the speed run levels in Rayman Origins where you had to chase the chests. It’s definitely a cool diversion from the usual platforming levels and bosses. Second, rhythm levels are a lot of fun but the ‘invaded’ levels could be my favorite. The invaded levels are speed run levels that go from right to left instead of the usual left to right. Each invasion level has 3 teensies that are strapped to rockets with timers. If you can get to the end of the level before the first timer goes off, you can save all 3 teensies. It’s a cool variation on the typical speed run levels and having the level progress from right to left is an added challenge. Who would’ve thought going right to left would be so difficult to get used to? Lastly, the new Murphy levels are totally unique to Rayman Legends. Each Murphy level requires the player using the Wii U GamePad to touch on the screen to move platforms, tickle enemies, squash bugs, and gather hidden items. The motion controls in the GamePad also come into play allowing Murphy to tilt platforms and other contraptions to help players get through levels. If you’re playing single-player, the Murphy levels aren’t nearly as fun. It’s really ideal when you’re playing them with a friend. The variety of actions to do on the touch screen really adds to the challenge and fun of the Murphy levels. It’s a key differentiator in the Wii U version and one of the best uses of the GamePad to date. New Super Mario Bros. U may have been the first platformer on the Wii U to use the GamePad but the creativity of each Murphy level in Rayman Legends makes it the most impressive platformer yet. 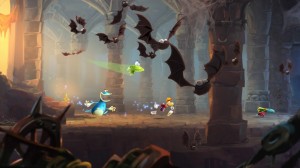 Oh, did I mention you can play through any level with four players? Gamers may not think multiplayer when they think Rayman but the multiplayer in Rayman Legends is a blast. I would put it up there amongst Mario Kart and Super Smash Bros. in terms of shear fun. No game can have you uttering the words ‘dead!’ and ‘slap me’ in the same sentence and not keep your attention. It’s just that charm and crazy gameplay that makes Rayman Legends so fun and endearing. Players can also participate in a new mini-game called ‘Kung Foot’. It’s basically a 2D version of soccer played in a single room. I wondered how much fun it could be but I was quickly convinced. It’s a fairly simple mini-game but has a lot of fun and variety to it. Rayman Legends also features several challenges that are issues on a daily and weekly basis. Players can enter these challenges which could finishing a level in a certain time or getting the farthest in a level that continuously evolves. You can compare your scores with players around the world, in your country, or even amongst your friends. The competitive and cooperative modes in Rayman Legends just simply can’t be beat. 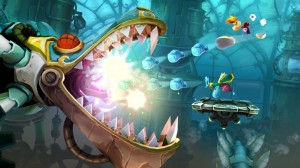 The graphical presentation and user interface in Rayman Legends is also top notch. I’ve already spoken a little about the UBI art engine and it really needs to be seen in motion to fully appreciate. The game is rendered beautifully on the Wii U and the frame rate doesn’t skip a beat. The user interface is also especially good for a Wii U game. I’ve seen several games that simply duplicate the same menus on the Wii U GamePad. Not with Rayman Legends. The UI on the GamePad is optimized for touch and features big buttons for quick navigation. The game also has unlockable tickets that are a lot like lottery tickets. Players will need to make a scratching motion on the GamePad’s screen to reveal the winning sections on the ticket. It’s a simple use for the GamePad but it further shows the polish of the game. Also, the touch screen will show various notifications such as new levels, new characters unlocked, etc. These all show up on the GamePad as touchable ‘links’. Just touch them and it takes you to that section of the game or to a specific character that was just unlocked. It’s those simple additions that really drive home how far this game has come since we first saw it.

Rayman Legends is wildly entertaining and will certainly be one of those gems we look back fondly on for years to come.