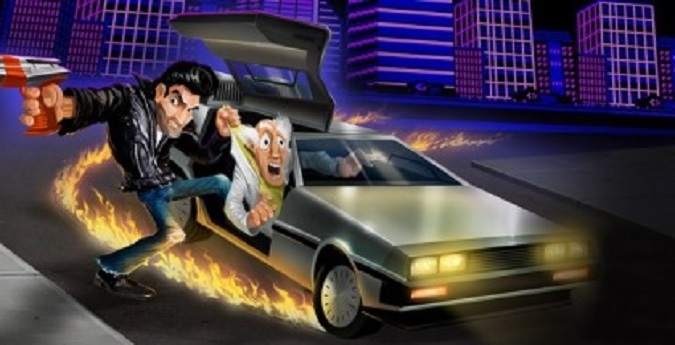 For Nintendo fans that didn’t play the WiiWare version of this game (and based on the unfortunate sales numbers that’s far too many) here’s another chance to experience it on Nintendo hardware.  Your wait may have been worth it – Retro City Rampage: DX on the 3DS is the best version yet! 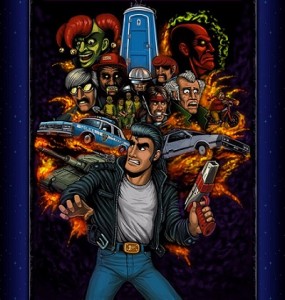 For those unfamiliar with the game, Retro City Rampage: DX is a parody overload.  From video games, to movies and television, nothing is left untouched.  I could easily fill this whole review just listing all of my favorite varied references, especially those from the ‘80s and ‘90s which dominate.  You take on the role of “player”, a character who fights the law (but he also fights the crime, but not as much).   Nintendo fans could think of it as LEGO City Undercover reversed, where instead of working as a cop you’re working for the gangs.  Despite that approach, the game’s violence is partially negated due to it being so darn funny – it’s all a silly affair that doesn’t take itself seriously.  There is a lot of action-adventure to experience in the large city of Theftropolis, and the sandbox approach means your experiences will be non-linear.  You’ll be left to do as you choose, and at any given time there are plenty of fun things to choose from.

Whether you’re advancing the main story – launched by a crazy time traveling hodgepodge of Bill & Ted meets Back to the Future – engaging in a plethora of side quests, playing in the arcade (Bit Trip Runner rules!) or simply running around and exploring to fill up your records & stats, there is never a shortage of things to do in Retro City Rampage: DX.  The fetch quests you’ll engage in encompass a variety of gameplay styles, covering pretty much every genre there is, which keeps things fresh and fun!  The humor that’s so prevalent throughout will be especially appreciated if you’ve played a lot of classic games.  It pays tribute to the best while taking jabs at others.  You’ll also hear some humorous opinions regarding the sad struggles of indie developers. 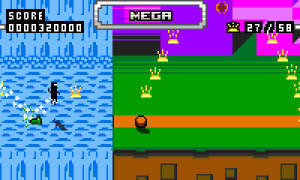 I think it’s important to note that, as much as Retro City Rampage: DX embraces the parody role, it doesn’t use it as a substitute for fun gameplay.  Don’t get me wrong, the enjoyment I get from the multitude of pop culture nods can’t be overstated – but at the same time, even if every reference were replaced or I somehow got a bout of selective amnesia, the gameplay is still solid as ever.  The embracing of pop culture, and the clever way the game does so to its advantage, simply makes it that much better!

Besides playing through the story mode, you can also play through all of the forty plus arcade challenges individually – you’ll want to make sure you find them all in the main game.   There’s also a free roaming mode (with unlockable characters, max cash, and fully stocked weapons!) as well as achievements to earn and view.  Help and options let’s you view an awesome NES style instruction manual and adjust various settings, including graphics modes where you can pick between 8-bit or Retro+.  Viewing the credits lets you see just how much of this game was done by one person, Brian Provinciano. 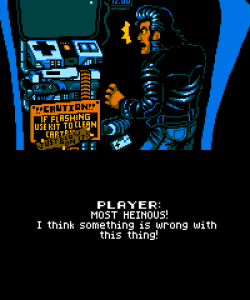 The graphics and sounds in Retro City Rampage will make those of us who grew up in the NES era feel right at home.  The 8-bit pixel visuals tap in to all sorts of nostalgia, managing to stay true to their inspiration while still pulling off tricks that most 8-bit games couldn’t handle.  The colorful world of Retro City is very populated, with all sorts of on-screen sprites, yet free of slowdown and flicker.  I also enjoy the fun cinematic screens, dozens of tv color mode settings, and literally hundreds of ways to do character customization.  My one disappointment is that, despite being initially planned, 3D effects had to be cut.  It doesn’t make the game any less fun though, and truthfully the amount of work would have meant a long delayed game – I’m grateful we got Retro City Rampage: DX when we did.  Musically, this game has great chiptunes – it’s no wonder it has its own soundtrack!  You can listen to all the music while driving around in the games fifty plus vehicles via the radio station!  Lots of effort was put into the game’s tunes, and while space doesn’t allow me to talk about them as much as I’d like, know that this game’s entire audio package reflects a lot of care.  Top notch! 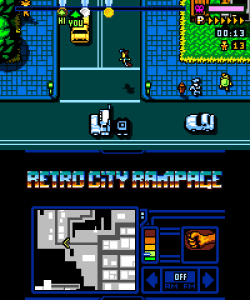 Control in Retro City Rampage: DX is very good.  Intuitive and responsive, failure will never result due to subpar controls.  In fact it’s at its best on 3DS thanks to things like the circle pad and the ability to jump while firing the many (over twenty-five) different weapons. Support for the Circle Pad Pro didn’t make the final cut, but since so few games use that accessory anyway I don’t miss it.  The overall spirit of the game is better suited to its absence in reality, and it doesn’t really need it for that matter, controlling fine with the just standard 3DS setup.  The 3DS has new interactive touch map functions (larger and more detailed with zooming capabilities) which I find very helpful, especially as you can adjust it to display as much or as little as you want!  Some great additional checkpoints make the challenge less frustrating and ideally balanced for handheld play.

Speaking of challenge, while some might complain that this version isn’t as difficult as those before it, I think they’re missing the point.  Difficulty was never the be-all and end all that made Retro City Rampage great in the first place – and I think the more balanced approach taken with the DX version will show that.  If it makes the game more accessible for an increased audience that can only be a good thing.  Retro City Rampage: DX should be experienced from start to finish, not replayed over and over due to unforgiving difficulty spikes!  I really appreciate all the effort put forth to make this version an even smoother and tighter experience while still retaining a satisfying challenge. 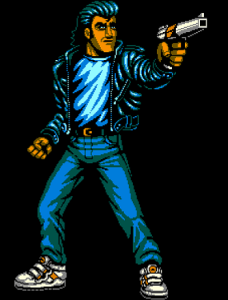 If you missed the game last year on WiiWare, or haven’t experienced it at all, there’s never been a better time to check it out in ‘Deluxe’ form.  With all the additions, tweaks, and a fresh coat of polish, Retro City Rampage: DX is the definitive version of the classic game, and an absolute must own!  If you’ve played the game prior, you might still consider checking it out – there are enough improvements to warrant another look, and playing on a handheld offers its own advantages over playing on a home console.  I think it’s telling that so many who are buying the game on 3DS already own it on other systems – it speaks to not just how fun the game is, but how much effort was put into this handheld port.  The game will continue to get free updates too!  There is so much more that could be said about Retro City Rampage: DX but, besides having run out of space, it would be spoilers for those yet to play it.  Have fun by discovering all this great game has to offer on your own!  Retro City Rampage: DX is an early candidate for 3DS eShop game of the year!