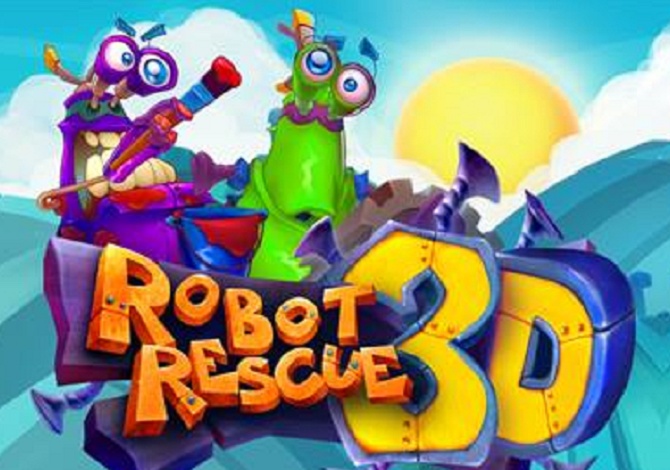 Released this past summer, Robot Rescue 3D recently came into my possession when bundled with a newer Teyon game code.  It’s a strategic puzzle game that will be familiar to those who played the previous entries on DSiWare – in fact with levels from the prior games, this can be considered something of a greatest hits release.  When you add in the brand new 3DS exclusive levels, you arguably have the definitive version. 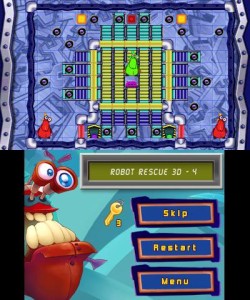 What makes this game stand out is the way it controls.  While rescuing robots from the various trap filled, maze like levels, you need to keep an eye on both screens – these robots move in synch!  I think this is a unique aspect that separates Robot Rescue from other games in the genre, and give it props for creativity.  Some of the levels can have dozens of robots, which can definitely seem overwhelming!  With over 100 levels, there’s enough challenging content to keep you busy for quite a long while.

There are good tutorial levels to help you get a feel for things, and learn how to use various items to your advantage.  And it’s a good thing since this is a difficult game (“perplexing and brain-bending” according to the publisher).  While it might not be an approach for less experienced game players, many will embrace the difficulty for the length it adds and the satisfaction that comes from winning tough levels.  If the difficulty seems uneven at times, and it very well may, there are opportunities to bypass particularly challenging levels to minimize frustration.  They are quite limited though, so use them sparingly. 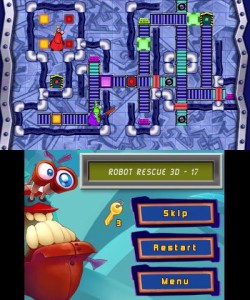 This game reflects its DSiWare roots in how it looks and sounds.  Visually it’s a bit on the dull side truthfully, and lacking in diversity.  It’s a puzzle game however, so graphics aren’t as important in my opinion.  The visuals manage to work well enough – they’re bright, I do rather like the colorful 3D robot models, and it has 3D effects.  On the audio end, I think the music is okay.  A bit generic, but never annoying, it may grow on you in time.

Control is fine, although the 3DS hardware isn’t taken advantage of.  The game doesn’t utilize the touch screen, and even the circle pad is of no use – it’s strictly a d-pad or button affair.  Another 3DS concern is that some of these levels take very long to solve, making it not the best handheld choice if you only have a few minutes to play.  Lastly, even though the game is fun, I think it’s definitely lacking in replay value when compared to some other 3DS puzzle games.  Once a level is defeated, there’s no real incentive to play it again.  That’s probably my biggest knock on an otherwise solid game

On the whole, if you are a fan of strategic puzzlers, Robot Rescue 3D will likely offer you a fun play through.  At only $2.99 there’s little reason not to download it.  If you missed it last summer, give it a look now.  Robot Rescue 3D is a solid title that will find an audience on the 3DS eShop, just like it’s predecessors did on DSiWare.