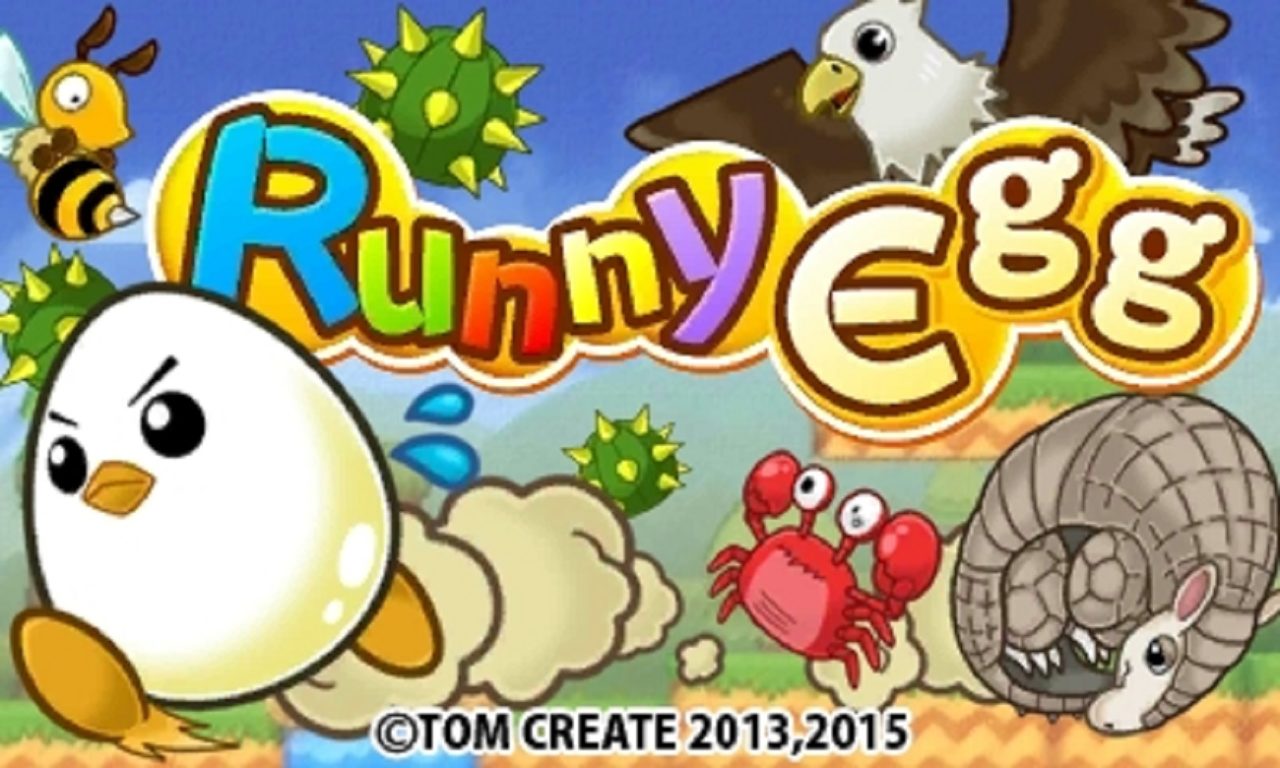 While the trailer makes this game appear as some type of runner/cooking hybird, it’s actually a platformer proper, and a surprisingly decent one at that.  While it didn’t wow right from the start, over time it grew on me thanks to several positives.  Some shortcomings hold it back from greatness, but  you could do much worse for just $1.99.  Grab some buttered toast, it’s time for Runny Egg on the 3DS.

This new eShop release is a faster paced platformer.  The game encourages speed through achievements and points, but it is arguably more enjoyable when played at a slower pace.  The level design is filled with branching paths, and some of the optional bonuses necessitate exploration for which the game seems tailored.  It’s over too quick when rushed through, but content is sufficient for completionists.

Runny Egg offers a cute, family friendly presentation.  It discards the martial arts themes seen in Tom Create’s other recent 3DS offerings, and it’s the better for it.  The imagery is diverse and colorful, and subtle 3D offers just enough to be an enhancement without detracting.  The music (while also cute) is lacking in variety when compared to the visuals.  The same repeating tune has real potential to drive you nuts, so this is one area I definitely wish saw a bit more development.

The game has three difficulty modes, and they seem well balanced.  While there is challenge to appeal to seasoned gamers, this is the sort of title that will primarily catch the eyes of kids and casual players.  Some repetition can set in (especially with the regular enemies), and the game suffers from pacing issues now and then.  Children will probably be less inclined to notice or care about such things.  The boss encounters do a large part in lessening this however, injecting some much appreciated variety into the gameplay.

The control is generally solid although it can be a bit loose at times.  I noticed double jumping didn’t always respond.  Safe landing (only applicable in hard mode) was similar.  Wall jumping is fun, although situations requiring it aren’t numerous.  As you earn points you can level up by increasing your HP, maximum speed, and so forth.  It’s a nice touch, but the sliders are overly sensitive.

The game has a curious recipe setup.  At first it seemed out of place and confusing, but essentially it’s a fancy way to keep statistics for how many times you’ve been defeated, and in what fashion.  It’s well intended and ultimately not a detriment.

Runny Egg went beyond my first impressions and  turned out to be a fairly solid game.  I still recommend it mainly for younger players, although the difficulty options and replay incentives (which differ by difficulty level) could appeal to seasoned fans looking for a budget offering.

While there’s room for improvement, Runny Egg has enough positives to warrant consideration.  Younger players especially should get a kick out of it.