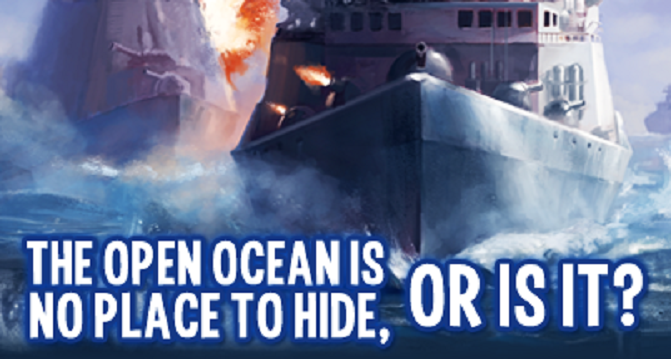 Have you ever played the board game Battleship?  Of course you have!  It’s been around for nearly 50 years, and remains popular today.  Sea Battle is a digital version of that time-honored game, and a pretty good one all things considered.

The game does well in providing players with options.  It offers choices for difficulty (select expert for all but the youngest) and more modern updates such as picking map size.  I’ve never played Battleship where topography could come into play, or where mines might be scattered about, so these are other fun inclusions.  Add in the ability to use radar, fire special weapons, and place diagonal ships (most welcome!), and I’ve been entertained with the optional extras added to the otherwise simple but well-liked formula. 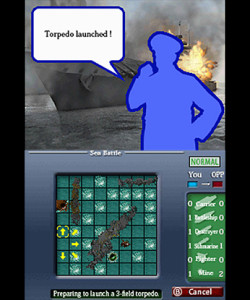 Sea Battle offers solo play or head to head.  Two copies are needed for the latter, but given how inexpensive the game is cost isn’t a negative.  A mission mode is offered up with specific objectives, like destroying the enemy fleet with just a single ship and so forth.  It’s a nice feature for when you tire of the traditional games, and offers more of a challenge that’s otherwise limited.

DSiWare graphics may no longer impress, but as this is a board game the visuals aren’t overly important.  They get the job done well enough, with little touches (like colored silhouettes of the captains, explosions, and photo stills) adding to the atmosphere.  The audio tracks, though quite limited, also contribute to the atmosphere, with combat appropriate music and sound effects that compliment without annoying. 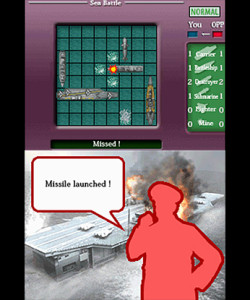 Admittedly even under the best of circumstances this game could only be so good – it is essentially just Battleship after all.  For those looking for a solid way to pass the time however, Sea Battle is fun.  If you’ve enjoyed the Battleship board game (and who hasn’t) you’ll probably enjoy this video game adaptation.  While a DSiWare release in 2014 is slightly odd, it does allow for easier acceptance of a simple budget title like this with modest goals.  Sea Battle accomplishes what it set out to do by translating an iconic game into the digital realm and offering it for a scant 200 points ($1.99).  At such a low price, this download isn’t hard to recommend – you’ll get your money’s worth.