Have you ever took a black t-shirt, turned it into a ninja mask and ran around the room making ninja noises? Yeah I just got done doing that too. Well sadly I’m only a ninja in the make believe world that is my imagination (I call it Tristan-topia, or Tristan-opolis. The spitting image of creativity ladies and gentlemen!) So seeing as though I’m not a ninja, I’ll have to settle for Shinobi 3 Return of the Ninja Master.

In this third installment, you once again don the Ninja garb of Joe Musashi and set off to rid Japan of the evil crime syndicate known as “Neo Zeed”. That’s pretty much the plot in a nutshell. Stop evil and look cool while doing it! 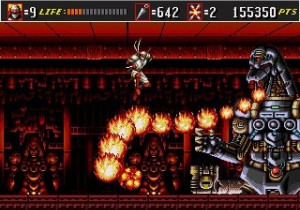 Shinobi 3 is an action sidescroller where your goal is to get to the end of the stage while destroying everything in your path. Your main weapons are your kunai, jump kicks, close range katana slashes and a devastating dash slash. Most enemies can be taken out with one hit, but some will require a bit more planning. While getting the controls down at first may seem challenging, once you get a feel for the game you’ll be dashing, slashing and kicking your way across the screen in no time!

But there are plenty of situations that prove more difficult than others. That’s when you pull out the Ninja Trump Card. Joe Musashi came prepared in his fight with Neo Zeed and brought some Ninjitsu magic to the fight. The four types are as follows:

Mijin: Destroys all enemies on the screen, however you loose one life in the process.

Kariu: Dragon-like flames damage all enemies on the screen

Each attack should be used wisely as you only have a limited amount of ninjistu at your disposal and you want to save as many as you can for what’s up ahead. 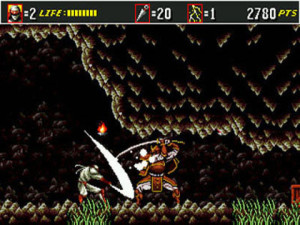 Much like the other SEGA 3D Classics, Shinobi 3 can be played in full 3D that can either pop-out of the screen, or fall-in which gives the game a bit more depth. I’ll go ahead and say while the pop-out setting is nice, it can be a bit disorienting at times. For those with sensitive eyes but still want to enjoy a good sidescroling 3D adventure, I recommend the fall-in perspective.

You can also play the game in what is labeled as classic mode which I assume is designed to give off more of a original CRT look. For you younger gamers, that was back when we didn’t have your fancy schmancy “flat screens”. But if anything, it feels like a fish eye lens. While I can see the appeal of going back to the original style, I personally kept it on the normal setting for a sharper resolution.

Shinobi 3 Return of the Ninja Master is a fun title and a reminder to my inner Nintendo fanboy that while during the console wars of the 90’s I was SNES all the way, SEGA could still produce some stellar titles. If you’re looking for a classic title that transitions well on the 3DS, I recommend downloading this game when you get the chance.