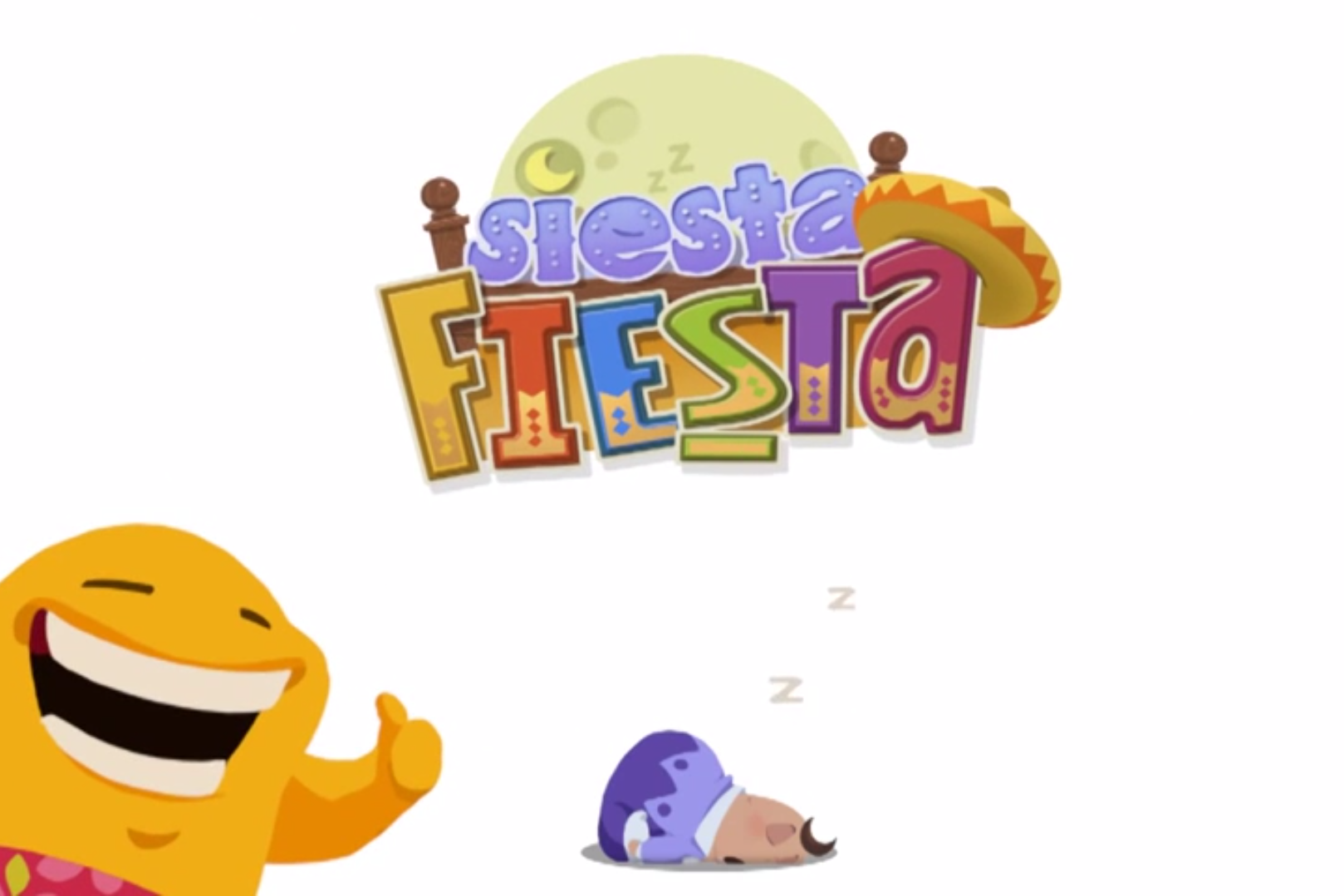 Siesta Fiesta is a Breakout styled game with a southwestern twist!  Players will control Siesta in a slew of side scrolling Breakout-esque levels across 8 different environments.  It is quite clear that Mojo Bones spent a lot of time polishing Siesta Fiesta because there are very few detrimental aspects of Siesta Fiesta.  Even though Siesta’s bed-bouncing antics remain pretty much the same across the various sets of level, the variety within the levels is what kept me coming back for more.

Sliding the bed back and forth to keep Siesta airborne can be controlled via 3 different options.  Players can use the circle pad, the directional pad, or the stylus on the touchscreen.  Each option feels a little different and provides players with a variety of options that can be tried out on the fly.  Most of the initial levels were spent trying these control schemes to find out which of the 3 I liked the best.  In the end I chose to use the stylus method, which to me felt like it provided better accuracy and control overall.  To me the circle pad was better than the directional pad and moved with a lot smoother, while the directional pad was very twitchy.  Even though I opted for the stylus control scheme, it still was not perfect.  I found that side to side touch controls with the stylus didn’t span the entire width of the top screen, which forced me to lift the stylus at times to reach the opposite side of the playing field.  Additionally, the shoulder buttons, which assigned to boosting Siesta higher in the air, are a little hard to use while holding the 3DS in one hand and the stylus in the other.  This is not so much of an issue when using the circle pad or directional pad but can be a little tricky with the stylus.

With the controls being the one glaring issue with Siesta Fiesta, most would think ‘This game is a mess.’ and dismiss it entirely.  This is a valid thought because more often than not bad controls in a game breaks the experience entirely.  Not saying the controls for Siesta Fiesta were bad but rather they were a but awkward.  But control issues aside, please read on because Siesta Fiesta is a fantastic game, and I’d like to explain why.

Siesta Fiesta starts players off with a tutorial that introduces the side scrolling, piñata-block breaking gameplay then throws them into the fiesta madness with a variety of interesting game mechanics.  Most of the levels throughout the entirety of Siesta Fiesta are based around collecting as many points as possible by smashing the piñata blocks.  Players are rated at the end of the levels with either a bronze, silver and gold medal based on their score.  There are a few levels that deviate from this format and change the style of play entirely.  Time trial levels don’t scroll sideways but rather provide waves of piñata and obstacles for players to overcome as quickly as possible.  Each wave being cleared only after breaking all of the blocks on the screen. Other ‘special’ levels focus on various game mechanics, such as a level filled with party ‘poppers’ that act like cannons firing Siesta across the from popper to popper to the finish.

This variety of style in Siesta Fiesta is not limited to game mechanics either.  The music and graphical style are completely different in the game’s 8 regions.  The various themes throughout the regions fit the gameplay quite nicely and remained very pleasant during the entire experience.  I never felt like the themes or music became repetitive, which can sometimes become an issue with more simplistic games such as Siesta Fiesta.  That is not to say the Siesta Fiesta is easy though.

I never found Siesta Fiesta to be overly difficult but it did provide an adequate challenge during most of the game.  Of course the initial levels were quite lenient, despite my failures due to trying out the available controls, but in this case I must commend Mojo Bones on the surprising amount of balance in Siesta Fiesta.  The game never quite felt too easy but at the same time I never felt that it was difficult to the point that I wanted to put it away.  This delicate balance compelled me to continue playing and see what I would run into next.  Even the quirky bosses were not any more difficult than the regular levels but rather it took time to figure out the method to beat each boss.

Siesta Fiesta is a charming game all around and is one of my favorite 3DS titles despite the issues I had with the controls.  This coming from someone who was initially skeptical based on the gameplay videos I had seen prior to its release.  On top of everything else going for it, who could resist the tiny cheers coming from the cute, chunky Fiesta characters!  Mojo Bones took the Breakout formula and turned it on its head.  Not simply by copying what had been done in the past but rather adding their own unique style and blending it with some interesting mechanics.  While the controls were not perfect, this game is not one that should be overlooked.  Siesta Fiesta is a great game at an even more spectacular price.  At $5.99 Siesta Fiesta is a highly polished and balanced experience that is a must have for anyone with a 3DS.