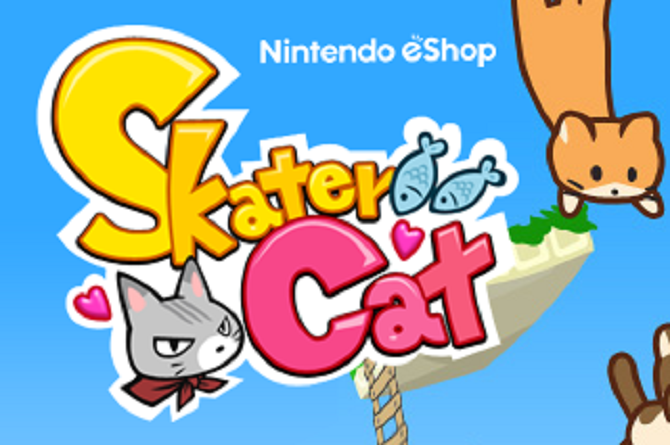 He was a skater cat, she said, “See ya later cat”

As a journalist I don’t particularly enjoy having to write negative reviews.   With that said it’s my sad duty to inform you that Skater Cat is a poor eShop game.  Read on to find out what went wrong … 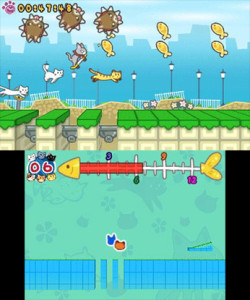 Skater cat suffers from a bit of an identity crisis. It’s sort of a hybrid, having the initial feel of a runner.  Yet it has obstacles that make you come to dead stops, and times when you’ll back track – it blurs the lines, while seriously breaking up the rhythm.   Your goal is to have Ollie cross the finish line of thirty levels (spread across a scant 3 worlds) ideally in the quickest fashion, and with lots of other well fed cats in tow.  These lead to earning medals (an absolute necessity) but it’s carelessly handled. 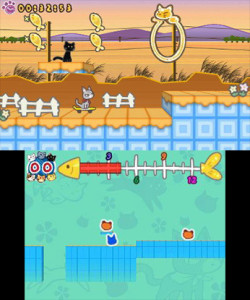 The badly written electronic manual says that ‘as you catch up to the other cats they’ll join you’ – what this actually means is that you need to run through them to have them follow you, and keep collecting food to make them stay with you.  The manual also says that ‘when you hit an obstacle one cat will run away’ – this appears to be untrue as I’ve had a multitude of cats vanish with a single hit. That explains why I can cross the finish line wondering where half my cats went.  It makes medal earning annoying, especially when there’s no clear direction what’s needed to do so – I’ve finished levels with a dozen cats in tow and nothing to show for it.  The medal system operates under the idea that the levels are so fun you’ll want to replay them over and over, but that’s pretty brazen thinking with these levels. 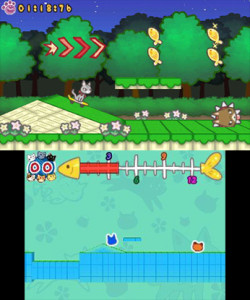 The game controls all right (if inconsistent at times), but the level design and structure simply aren’t built to utilize it well.  It doesn’t appear to have much thought put into it, almost looking like the results of a subpar random generator.  Thus levels are littered with pits and dead ends that are impossible to see ahead of time with the game’s camera – antiquated ways to implement challenge.  It’ll frustrate kids (its target audience) looking for a fun game, as will the lack of checkpoints.  By the same token it’s insulting to adults craving genuine challenge.  Not only does the game get easier the further you progress, but it doesn’t even fail you for hitting obstacles or landing on spikes!

Skater Cat’s visuals are colorful, but incredibly uninspired.  They’re so bland and repetitive I felt like I was playing against a wall paper pattern.  Imagine how stunned (and disappointed) I was when I saw the same ten patterns from the first world still being reused in the third!  There’s barely any visual diversity in this game.  Worse is the music – there’s only so many times you can hear the same track over and over before you lunge for the volume control.  I thought it would at least change between worlds, but no – the same single track plays through all thirty levels!  This is a very lazy audio/visual package. 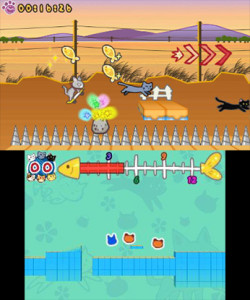 In order to see the rest of the remaining levels the aforementioned medals are required – more than half the game’s locked out from the outset.  When replaying levels to earn medals you can hit retry, but the game bizarrely boots you back to the menu forcing you to manually pick the level to retry.  With such a focus on medal collecting, the whole system is handled poorly in multiple ways.  Other focuses are on rather meaningless features like StreetPass and Mii play, but why even add extras when the core experience is still so bad to begin with?  I admit that playing with my Mii instead of Ollie is kind of cool, but let’s not kid ourselves, the odds of getting a StreetPass tag for this game is minuscule.

After forcing myself to play through all thirty levels (which shouldn’t take much more than a couple of hours) I didn’t even get anything for beating the game.  In fact there’s no ending of any kind, not even a ‘congratulations’ or ‘thanks for playing’!  It just sends you right back to the menu.  Seriously, it reeks of either being rushed or having corners cut, if not both.  It feels like a cancelled $1.99 DSiWare game masquerading as a $5 eShop title.