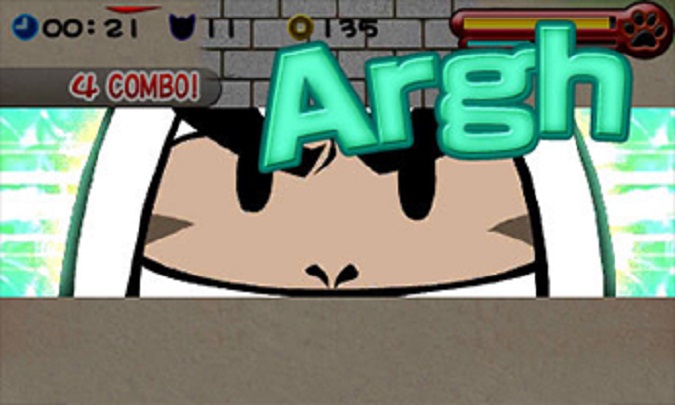 Smash Cat Heroes is a mindless button masher.  It does have a “plot”, but it’s so threadbare I’d forgotten what it was – it involves rival kitty clans searching for cat food.  I need to be upfront and say this is one of the worst designed eShop games I’ve played to date.  It truly pains me to say that, but it does just about every single thing badly.

I’ll start with some of the more fundamental elements. From a visual standpoint, this is underwhelming to say the very least.  There’s little in the way of details or scenery – the sparse playfields make it look like a low budget mobile game.  The characters are identical sprites, simply color swapped, with barely any animation to them.  The game makes no effort to incorporate 3D.  Audio also disappoints.  The same lone music track plays during each stage.  The sound effects consist of annoying and repetitive cat meows, coupled with weak sounding slashes from your weapons.  Control is definitely not as tight as I’d like either.  Despite using the circle pad, you can’t even move diagonally!  It’s strictly a traditional affair too, making no endeavor to utilize the touch screen.  As it’s all basic button mashing, there’s a huge lack of variety – this can be said of about all the game’s aspects. 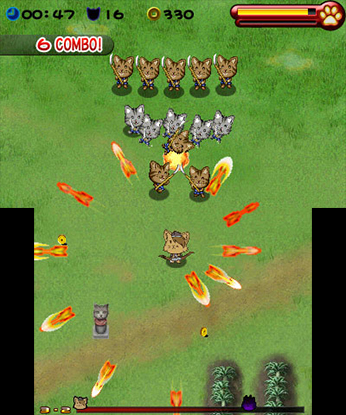 Having multiple characters to play with sounds decent, but their stats are too similar, making the differences pretty negligible.  The stages you navigate them through have dull design, with little creativity evident.  The game’s just so mind-numbingly repetitive!  You do earn money, which can be spent at the store to buy stat upgrading items.  It feels like a mobile DLC setup, and quite honestly is a waste – when the core game’s so poor, why would I want to replay it over and over to earn decent amounts of money, just to buy upgrades to keep playing?  That said, upgrades are pretty much mandatory due to the game’s artificial intelligence.

Here’s an oxymoron for you – the AI is brainless, yet difficult.  It’s the norm for enemies to stand perfectly still while you pummel them.  Although the playfield’s virtually empty, you’re guaranteed to have several enemies get stuck behind a lone rock or log – unbelievably this even applies to the bosses!  The AI reflects little in ways of smart design – the challenge comes from their sheer numbers, unavoidable hits, and limited hit points.  At best this is an outmoded way to make a game difficult.  At worst it’s a result of inability or neglect.  If you can mash a button, you can beat this game in time, but would you want to?  The game doesn’t even include multiplayer! 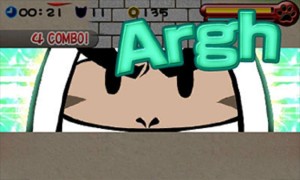 There’s just so little here, and even the basic elements are botched.  Usually when playing a bad game, I can at least get an idea of what the development team was trying to do.  For this game though, I’m pretty much at a loss.  It’s readily apparent this can’t possibly be close to the original goals.  I don’t say that lightly.  For as much as the design fails, the worst offense may be the game flirting with functionality – twice I had it freeze up before even reaching the title screen, forcing a reboot!  Smash Cat Heroes is an unimaginative disaster.