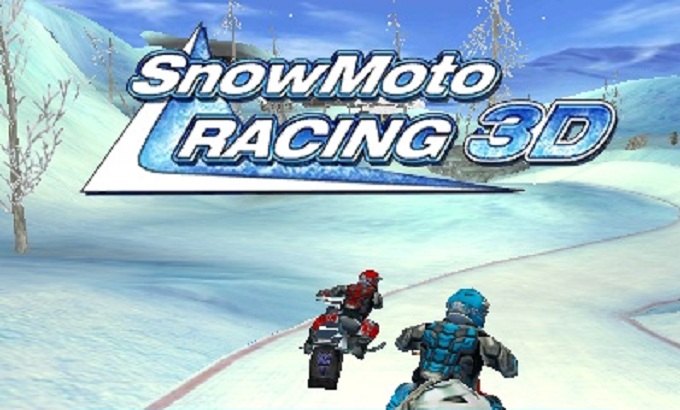 Hot on the heels of the very enjoyable Aqua Moto Racing 3D, comes Zordix’s next entry in the series, Snow Moto Racing 3D.  Perhaps a bit more time between the two releases might have helped the game though.  I can see many assuming this to simply be a reskinned version of the former, which is understandable even if it isn’t always the case.  And comparisons are inevitable.  So how this does game compare to its water counterpart?

For the most part the game retains the same great looks of its predecessor which is a very good thing.  But as a rule, the snowy environments do tend to be less colorful and I miss the greater variety even if it’s not unexpected.  Being on snow and ice some of the lighting is blinding too, which could annoy, though I find it does add an extra layer of challenge.  Everything is still sharp and well defined however, with good texture work and nice variety in the scenery that the snowy settings seem to promote.  It’s entertaining whether you’re riding through wide open villages, or flying off ramps on a narrow racing track. 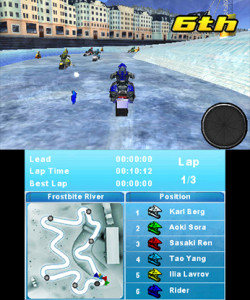 The game runs smooth for the most part too, although it does get choppy when the 3D is active (something I didn’t notice in the last game)  Even on a low setting, the 3D is more of a distraction than an asset unfortunately.  The flying snow is also much more of a hinderance to visibility than the spraying water in Aqua Moto Racing was.  This is too bad, especially for a game with 3D in the title.  In 2D it’s all good though and, even if it can’t quite match its predecessor visually, I still think it’s one of the better looking eShop games.

Sadly, the music is a step backwards in my opinion.  While Aqua Racing’s tracks weren’t overly noteworthy, at least they were varied and meshed pretty well with the onscreen action.  This game’s tunes seem loud and overbearing however, most sounding like uninspired rock with little differences between them.  I am grateful there are options to tweak the audio settings, as this allowed me to lower the volume.  I wish the music matched the heights of the visuals.  If you’re a fan of this style though, I suppose it’s all right.

I appreciated the variety in course layouts with Aqua Moto Racing, and Snow Moto Racing matches this, if not surpassing it.  Tracks that allow you to go off the beaten path are my favorite, giving opportunities to find shortcuts (which is still a must to earn medals via fastest laps) and extra cash or turbo icons.  It also presents further opportunity to appreciate the game’s visual flair, design, and details.

The game controls well, and manages to separate itself from its predecessor further with the snowmobiles having their own unique handling.  This is especially evident when turning or flying off ramps.  Control remains pretty tight and responsive, even when navigating the most slippery slopes.

Earning turbo is a bit less satisfying than the previous game though, as you don’t really utilize the responsive control to do so as much.  Without buoys to tightly navigate around, the icons are often just laid out for you to simply drive over.  And even when activated, turbo doesn’t seem as noticeable as before for whatever reason.  Thankfully, as I mentioned already, there are turbo icons laid off the beaten path which makes exploring fun when the opportunities present themselves.   And of course you can still fill your turbo gauge via stunts.  However … 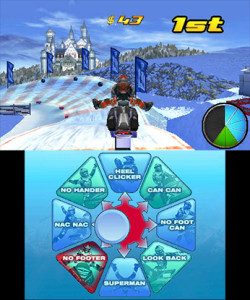 I wasn’t overly fond how stunts were handled in Aqua Moto Racing, but I was appreciative of the choices given.  This game gives you the same choices, but the alternate method uses the circle pad instead of allowing the d-pad this time around.  In this instance,  I actually find it to be a bit less responsive.  It was a needed addition – this game has even more stunts to do, and the circle pad allows for more directions easier than the d-pad does –  but it’s just too common an occurrence see the wrong stunt picked.  If you like your stunts random (or prefer not to do them at all) this matters not, but I feel this is an area that failed to improve.  Extra stunts are good on paper, but the means to execute them consistently should be there too.

So far my review may make the game sound like a mixture of elements that are either the same or slightly worse than those found in Aqua Moto Racing, but there are a couple aspects that are improvements.  Collison detection seems better in my opinion, and unpausing the game can now be done by simply tapping gas rather than needing to use the touch screen .  At its core though, it does have most of the same pros and cons as Aqua does.  As I enjoyed that game, I enjoy this one too, albeit a bit less.  Shortcomings aside, this still makes a good purchase.

I’m relieved to say that Snow Moto Racing 3D has a unique feel, which should allow it to carve out its own identity on the eShop.  Despite some flaws it’s still a fun game, and makes for a quality download.  If you prefer your racing on the ground, this is a very solid implementation, that’s proving to have an addictiveness all its own.