This new DSiWare release is a sokoban game, which (courtesy of Wikipedia) “is a type of transport puzzle, in which the player pushes boxes or crates around in a warehouse, trying to get them to storage locations.”  I’ve played titles like this before (even if I didn’t know what they were called) and they can be a solid way to flex the brain and pass some time – this game’s no exception.

Featuring different crates, unique squares, switches to alter the level, etc. there’s variety here beyond the basic sokoban formula.  Things like momentum, and opening and closing doors add an additional layer of challenge.  You’ll be grateful to know that, should the challenge prove too high, you can utilize a skip feature up to a point.  Some levels start already in progress, with crates already on the move.  It necessitates some trial and error (action unfolds before there’s time to get a handle on it) but it does inject some variety and is done so sparingly. 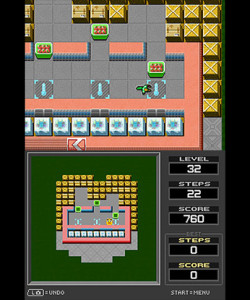 The real difficulty comes not so much from solving a puzzle, but doing so in the fewest number of steps.  I find I had a tendency to over think solutions, making them seem more complex than they actually are.  When stuck on a puzzle for a while, I found being able to skip it and return later would often result in quick completion.

Visually this is a very old-fashioned looking game – thank goodness graphics matter little with this style of puzzler!  They’re functional (it’s easy to tell what is what) without becoming a distraction.  Solid in their simplicity, they get the job done.  Clearly the focus was rightfully put on puzzles, with visuals taking a back seat.  We also need to remember this is native to DSi, not the 3DS. 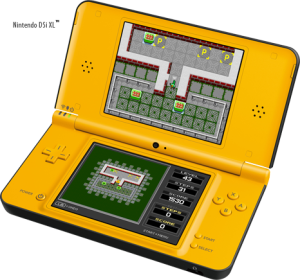 The varied soundtrack fits the action well.  The tunes lend some unexpected excitement and suspense.  The credits say “Music composed on Rytmik Retrobits”, a musical creation tool that Cinemax released to DSiWare a few years back.  If you enjoy these tunes, you may want to check out that release.  The tracks differ from those used in the trailer – they’re much better!

The control is simple, with player actions mapped to the d-pad.  Camera movement can be controlled with either the buttons or using the stylus on the touch screen.  With a full map view displayed at all times, and a quick and handy undo button, I had no control issues of any kind. 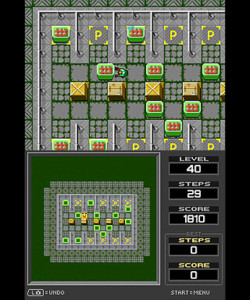 Replay value has its limits of course, but online leaderboards help.  As this is DSiWare, they’re used by submitting a code on the Cinemax website.  With multiple profiles, you can also easily bring family or friends into the puzzle solving.  This isn’t a wow inducing type game, but it definitely held my interest through to completion.  Priced right at just $1.99, this is an inexpensive and enjoyable game that’s an easy recommendation for puzzle fans.