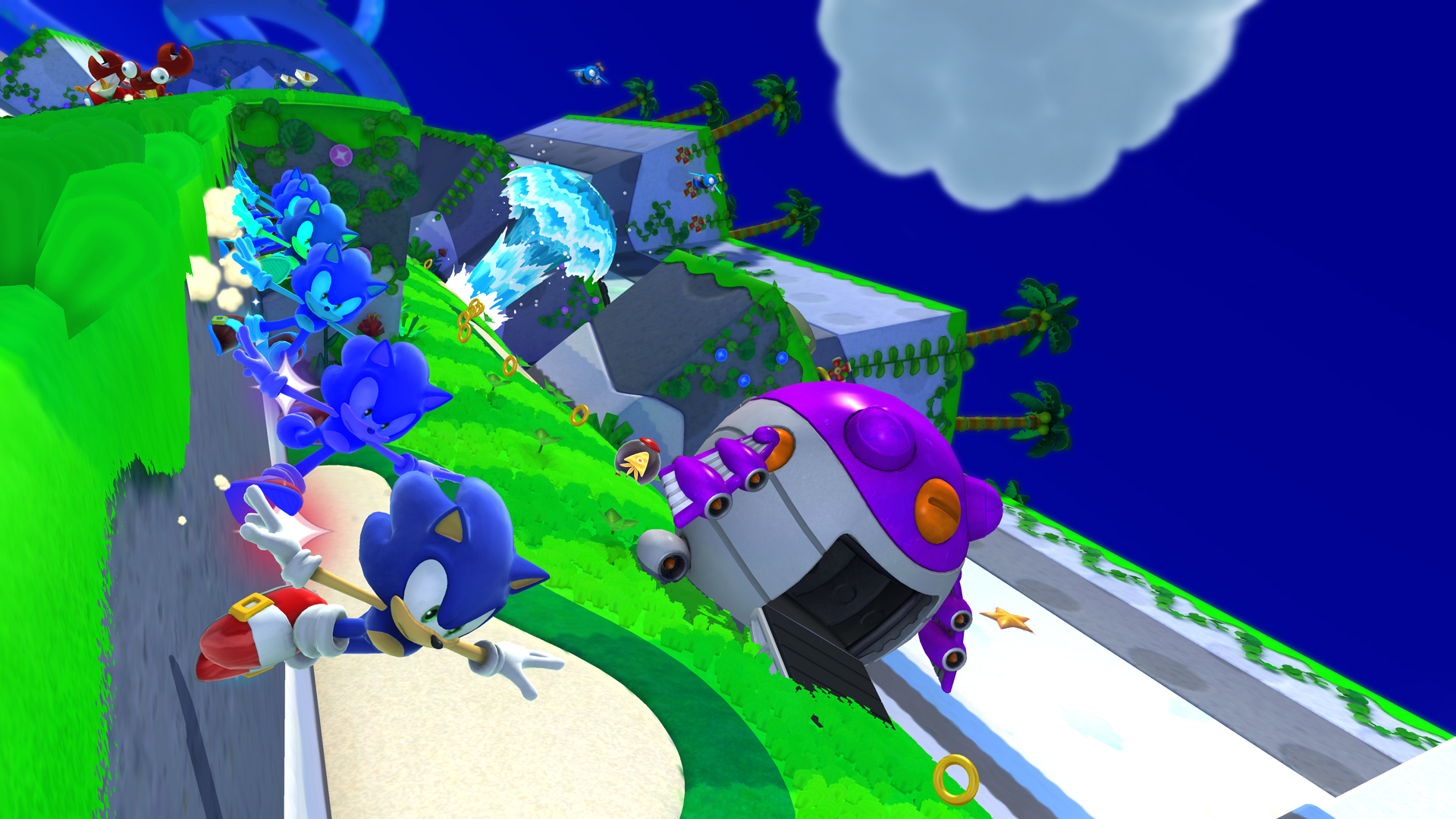 Sonic has had a bit of a rocky past when it comes to some of his games. There have been the good, the bad and the down right awful. I’m looking at you Sonic 2006! But along the line, Sonic Team blew us away with some good titles such as the surprisingly good Sonic Colors. They would impress us once more with the nostalgic throwback of Sonic Generations a few years later and recently, we’ve received Sonic Lost World. I had the chance to play this demo at E3 2013 and once more at PAX Prime and I’ve got to say, I was impressed and even excited to see Sonic triumph again in the gaming world.

But would his exclusive Wii U installment fair well? There were already many complaints amongst gamers saying how it was “too similar to Mario Galaxy” or how “Sonic has lost his speed”. Lets not waste any time and spin-dash right into Sonic Lost World for the Wii U.

Right off the bat, Sonic and Tails are in hot pursuit of Eggman who has captured some animal critters to convert them into badniks. After taking some wing damage, Sonic and Tails have no choice but to land on what is known as “The Lost Hex”.

After rescuing some critters here and there, the dynamic duo learn of Eggmans plan. The evil doctor has constructed a device known as the extractor, which is designed to suck the very life force from Sonics world to power his badnik army. Not only that, but he has some help from a group of beings called the Zeti.

It’s up to Sonic to dash to the rescue and put a stop to Eggmans evil plans once again!

Here’s where things get interesting. Sonic has come equipped with some new and old abilities to help him traverse the lost hex and the obstacles that lay within. Returning are the homing attack, bounce ability, the super peel out from Sonic CD and the ever so amazing spin dash. In terms of new physical attacks, Sonic can now kick enemies that may have thicker armor. If you’re ever facing an enemy that wont go down with a simple homing attack, just kick it!

The wisps from Sonic Colors are also making a return to give Sonic a hand on his latest adventure. There are the returning powers of laser, drill, rocket, hover and the new powers eagle, rhythm and asteroid. Each have their own use of the gamepad, which I’ll be honest, can be tricky to pull off at times, but practice makes perfect.

But lets face it, at this point we expect Sonic to have these abilities. What about the new? Well for starters, you have the ability to control Sonics speed. WHAT?! SONIC HAS A SPEED OTHER THAN JUST FAST?!? UNACCEPTABLE!! On the contrary, this is something that needed to be implemented in previous Sonic games since he first raced into the 3D world. Looking back on previous Sonic games, I feel as though its safe to say that a good majority of my deaths were due to Sonic being way to fast, hard to control, therefore sending me into a pit or other hazard.

Pushing forward on the control stick will take Sonic into a light jog while holding down the ZR trigger will cause him to run and use his new parkour skill. This method can help you run up and along the side of walls, reach hidden areas, or to zip by obstacles with classy speed.

So in the end, Sonic becomes more manageable to control and still retains his trademark speed. You just have to know how to use it. Right now you’re probably wondering “Well that’s good. Here I thought he was gonna be slow and…….did you say parkour?…Like hardcore parkour?!” As a matter of fact, I did!

One of the key abilities in Sonics latest adventure is his use of parkour. Holding down the ZR trigger will not only allow Sonic to run faster, but it will also allow him to scale up walls and run along side them. This helps not only keep the momentum of the game going, but the chance to reach and explore new areas in each level. While we’re on the subjects of levels, lets talk about that for a bit.

Each level has their own unique design ranging from 3D levels transitioning to 2D platforming, to nothing but non-stop grinding. Each time I replayed a level, I seemed to find a new pathway simply by exploring and using the parkour ability. In fact, if you plan on truly completing the game, you’ll need to stray from the main path if you have any hope in collecting all five red rings located in each zone. That’s right kids, the red rings from Sonic Colors and Generations have returned and while they’re not too difficult to find, they can be a challenge to obtain. I’ve died and continued MANY of times to obtain all of them and what reward awaited me?…that’s a secret.

Looking back on the 3D levels, you can actually run along the underside of some sections and yes it feels similar to that of Mario Galaxy. HOWEVER!…back 1996 a game by SEGA entitled “Sonic X-TREME” (it was the 90’s so lay off on the title) the basis of a 3D level rotating in such a fashion was already in development. Sadly, it was canceled and never saw a public release. So while yes, it may feel like Mario Galaxy, just remember that SEGA was working on a similar style back in 96. Besides, even if it feels similar, the game is still fun to play.

Sonic Lost World also makes use of the Miiverse as you can send collected items to other gamers to give them a hand along their journey. Items such as speed sneakers, an additional ten rings, even an extra life can be sent via Miiverse to help out your fellow gamer. Hopefully more features like this will be implemented in future Nintendo titles.

Lastly, Lost World offers a multiplayer feature where two friends can race to see who’s the fastest in either getting to the goal, or collecting the most rings before the timer is up. What’s really cool about this is how all of player ones actions are being presented on the gamepad while player two uses the TV. Each level is very well designed, as fast exploration and reflexes will be the key to victory.

While I had a fun time with Sonic Lost World, there were some issues along the way. The story is a bit on the short side as if you devote enough time to it you could beat it in a day, and that’s with collecting all the red rings. The lack of having the Wii U Pro Controller as a second option was a bit disappointing but not a game breaker. Hopefully they’ll release a patch for it in the future, but I digress. In the end, Sonic Lost World is a fun game and a must have for any avid Sonic fan. While this wasn’t the strongest title in his franchise, it certainly wasn’t his weakest.