SPIKEY WALLS has already invited a lot of criticism on itself as an unapologetic clone of the infamous game Flappy Bird.  The side scrolling, arcade style, endless flyer was a flash in the pan on mobile nearly a year ago.  I’m not opposed to clones in and of themselves, especially if they can improve on certain ideas, or add unique elements.  Sadly, SPIKEY WALLS does no such thing, making for an unsatisfying eShop game. 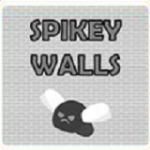 This statement from developer RCMADIAX is telling… “If you would have ask [sic] me 6 weeks ago if I would have ever made this type of game then I would have said “HELL NO!”. This title was made after seeing titles such as “The Letter” and “IQ Test” climbing the charts despite getting really low review scores.”  That candid admission says much, but I’ll elaborate on what it means for this game

Visually, SPIKEY WALLS is hugely disappointing!  Simple to a fault, it’s an especially dull game to look at.  I can’t even tell what it is I’m flying.  Is it a licorice gumdrop?  A lump of coal?  You move across a never changing, stationary brick backdrop.  The game’s sepia tone look begs for some splashed color!  In fairness, prior games from RCMADIAX weren’t exactly graphical powerhouses, but SPIKEY WALLS has such a lackadaisical look, especially when I’ve played free mobile clones that far surpass its design.

Music wise I’m not sure the game fares any better.  RCMADIAX has a new music composer for this game, but the results are unpleasant.  In typical RCMADIAX fashion there is only a single music track, but where Blok Drop U and Poker Dice Solitaire Future each had a catchy tune, SPIKEY WALLS lone track quickly got on my nerves!  It might be to some people’s liking, but the brevity and lack of sound effects are certainly big let downs.

At least the games basic control is all right, and load times aren’t a factor.  What else does it offer?  Very little, unfortunately.  A single high score is saved but there are no means to enter initials for local leaderboards, nevermind online ones.  Posts to Miiverse will have to suffice.  You can select from 4 languages, but as the game has virtually no text, how much value is it?  SPIKEY WALLS had the potential to make a positive mark, be it with a creative character, having multiple characters, different backgrounds, moving spikes, etc.  None of these features are present though, and little if any evidence of ambition, creativity, or pride.  It pains me to say it, but everything points to a cheap cash grabbing experiment.  Are these the type of releases we want to see on the Wii U?

I like RCMADIAX.  I don’t like SPIKEY WALLS.  The style isn’t a good fit for a home console like the Wii U, and it’s a poor game in its own right.  One could argue it offers a few minutes of mild enjoyment at a very low price, but I can’t see myself returning to it – the quality just isn’t there.  Spend 99 cents on Blok Drop U or Poker Dice Solitaire Future instead.  SPIKEY WALLS is an ill-advised impulse, one that may ultimately backfire.  Super Robo Mouse can’t come soon enough!