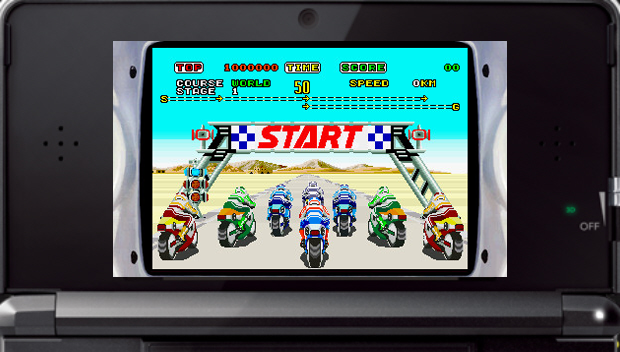 Super Hang-On 3D brings the classic arcade racing experience to the Nintendo 3DS. For those of you not familiar with the original Super Hang-On, it’s a motorcycle racing game released by SEGA in 1987 that has you speeding around curves and avoiding other bikers and obstacles on the side of the track. And the first thing I’d like to point out about Super Hang-On 3D is that it’s not just a simple port from another system, it’s been redesigned specifically for the 3DS with features like Gyro Sensor Play and 3D graphics.

The tracks consist of 4 different classes in various regions of the world. The classes are Beginner (6 stages in Africa), Junior (10 stages in Asia and Australia), Senior (14 stages in the Americas) and Expert (18 stages in Europe). Some of the races can get pretty challenging, but you can change the difficulty and increase the time limit if you can’t handle it. To be honest, I wasn’t able to finish the Expert stages without increasing my time, but I haven’t given up trying yet.

Super Hang-On 3D gives you multiple ways to control your bike. You can use the Circle Pad, D-Pad or the touch screen, but I found the gyro controls to be the best option. With Gyro Sensor Play on, you tilt the 3DS system left and right to control the bike, making your experience even more like the original arcade version. 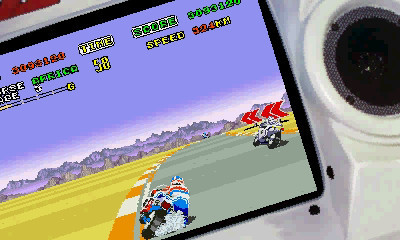 The 3D graphics in this game are decent, but don’t really add much to the excitement of the game. I played with the 3D on while using the Circle Pad, but had to turn it down some with Gyro Sensor Play. As expected, the 3D graphics don’t work very well when moving the 3DS from side to side. But the 3D option is definitely nice for those who prefer playing without gyro controls.

I think Super Hang-On 3D is great for anyone who enjoys classic racing games. There was so much thought put into this game to really give you the arcade-style experience, like the Gyro Sensor Play and a Moving Cabinet mode that emulates the feeling of shifting your weight on the bike to make the turn. Super Hang-On has been released for other systems in the past, but none of them come as close to the original arcade version as Super Hang-On 3D on the 3DS.

Steve Jobs and Shigeru Miyamoto came to me in a vision when I was a young child and showed me the light. Apple and Nintendo are my life now, and my life is awesome! Besides being a Pure Nintendo editor, I also run the Apple news blog MacDaddyNews.com. My favorite franchise is Zelda, and Link's Awakening is my favorite game in the series. I can destroy anyone in NBA Jam for the SNES....blindfolded. Okay, maybe not blindfolded, but I'm up for the challenge. NNID: purely_eli
Comments
Submit a Comment