As a student of video game design, I have often dreamed about what I would do if I were given the chance to work on some of Nintendo’s IPs. You can imagine my delight then, when I found out that I would be reviewing Super Mario Maker for the Wii U. The idea of being able to create Super Mario levels on the fly with the Wii U game pad had me incredibly excited, as I am sure most of you reading this review are as well. Just how much creative freedom does Super Mario Maker give you, though? It’s time to put on your construction hat and find out! 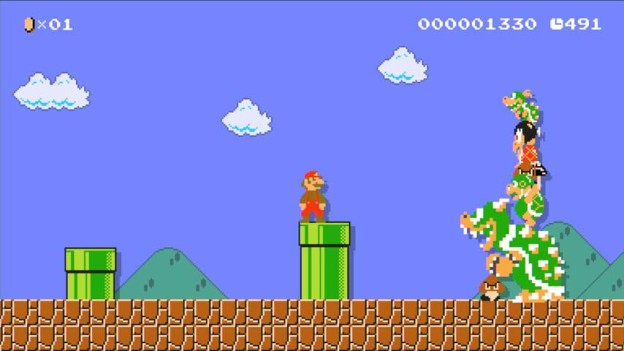 Super Mario is perhaps Nintendo’s most cherished character, and it’s clear from the game’s presentation how much love and thought was put into all aspects of the design. All of the objects you use to build your levels are faithfully represented in the 2D Mario style of your choosing, even if the object in question didn’t exist in the game when it was originally released. Sprinkled throughout the user interface are little nods to Mario Paint, an SNES title that allowed you to create art, and it’s clear the game was a big inspiration for Mario Maker. It’s a great bit of nostalgia for older gamers, and it adds to the game’s charm. As you build levels, you’ll hear remixes of familiar Mario tunes that correspond to the type of level you’re creating, and as you lay down objects to build your stage, each piece will contribute a note to the song, therefore completing the tune. It’s a really nice touch that will have you grinning from ear to ear. Of course, when you play levels, the music sounds just as it did when you first heard it on the original hardware, so your nostalgia stays intact.

Perhaps the most impressive thing about Super Mario Maker’s looks is the idea booklet and digital manual that comes with the game. If you’re going to purchase a digital copy of the game, be sure to request your free, physical copy of the ideas booklet, as it is filled to the brim with sketches, level mock ups, and tips on how to combine certain items and enemies to create new challenges. Looking through the booklet will definitely help get ideas flowing through your head, and there are even codes placed in the booklet that can be entered into the game’s digital manual. These unlock special videos to show how the ideas in the book can be implemented into your level design. It’s great to see something that resembles a physical instruction manual be included with a game again, and It’s a great way to jump start your creative thinking. 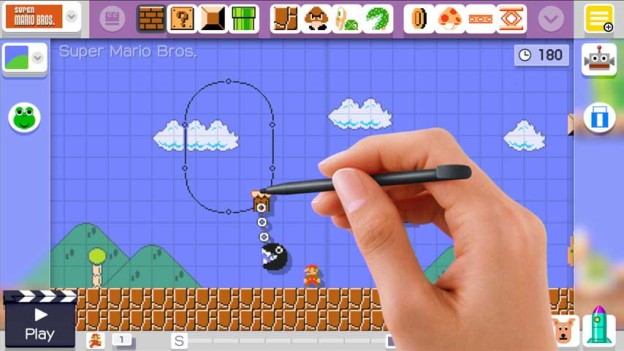 That’s not to say the digital manual in Super Mario Maker is lacking, as you’ll have your very own personal assistant to guide you, aptly named Mary-O. This is perhaps the most interactive digital manual to date, as there are plenty of instructional videos, animations, and advice Mary-O will supply you with learn how to control the game. There is some great Intel to be found here, and for the first time in my life, I recommend that you explore the pages of the digital manual, as the level design guidelines from the developers is both interesting and enlightening. After reading up, you’ll be thinking like a level designer in no time.

When it comes to the level creation side of Mario Maker, the tools provided to you are very robust and easy to use. Enemies, items, and platforms can all be placed within a stage with a few taps of the touchscreen thanks to the toolbar at the top of the game pad. You can even customize what game objects appear in your toolbar, so you can have all the items you’ll need to build your level at your fingertips, minimizing the need to switch between the multiple toolbars of level assets. There are also short cuts that allow you to select multiple items at once, or even duplicate them, and this makes landscaping large chunks of a level a much more streamlined experience. As you build levels, not only will you be able to unlock the Super Mario Bros. 3 and Super Mario World game styles, but different level environments will become available to you such as Bowser’s castle, or even an underwater stage, just to name a few.

While some people may be frustrated that the game forces you to wait 24 hours before unlocking the next set of tools, it’s a wise decision on Nintendo’s part. When you drag certain enemies or items on the touchscreen, you can shake them back and forth in order to change the way they behave. I often found myself spending quite some time experimenting with different combinations of items to see how they would behave in a stage, and this can be just as much fun as creating the level itself. The best levels will use objects in new and interesting ways, and the only way to find those combinations is to have patience and experiment.

At times it may feel like you’re restricted in what you can do, but as you unlock more game objects, you’ll begin to find new and creative ways to use them in order to solve your design problems. Want to make a gigantic maze, but feel limited because the warp pipes only grant you one sub-level to work with? If you’re clever, you can box off different sections of both the main and sub levels of your stage in order to give the illusion that your maze has many rooms. Solving a design problem like this is incredibly satisfying, and thanks to how quickly you can switch between the build and play modes, you can test out your solutions very quickly. 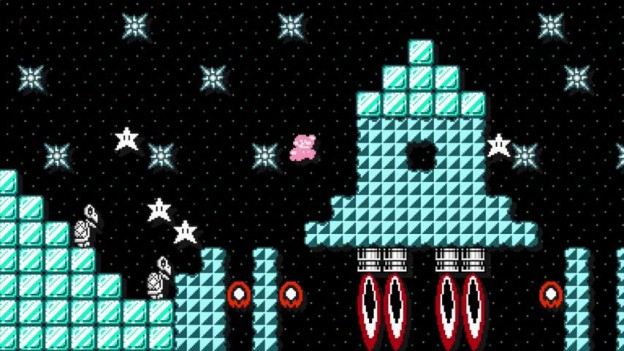 Now that you have an awesome level built, you’ll need to beat it before it can be uploaded onto the Internet for others to play. This lets you see the fruits of your labor, as well as making sure it’s possible that others will be able to clear your stage. You’ll start off by being able to upload only ten levels, but as people play and “star” your stages, you’ll earn coins that grant you the ability to upload more stages, and these coins will also let others know how popular your levels are. You are also able to seek out and play levels from a variety of designers, and you can favorite level creators that make content you like. Levels that don’t get a certain amount of stars will eventually be deleted, and this makes certain that the stages you play online are quality.

One hundred Mario challenge and ten Mario challenge are two modes that let you play through eight randomly picked, user created levels with the corresponding amount of lives respectively. If a level proves too difficult, you can always skip it with the press of a button, but both game modes are a great way to get inspired, or to find new creators to follow. When it comes to the online play, Super Mario Maker makes it easy to share, play, and critique levels with people all over the world. 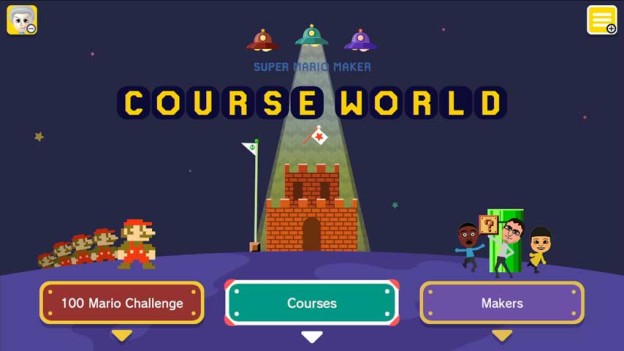 Super Mario Maker boasts, “Anyone can make it. Everyone can play it.” In this regard, I think they have succeeded. There are a ton of game objects for you to work with, and building and uploading levels is a breeze thanks to the easy to use interface. While it may be frustrating to not have all of the items available to you at first, it’s done in your best interest so you can master what you have, and improve the quality of levels you produce. The game encourages experimentation, and with the game’s idea booklet, digital manual, and online community, inspiration is never far away. Anyone can make it, and you may be surprised at what you have the ability to dream up and create. Super Mario is a character that is universally loved by gamers, and Nintendo has now given us the tools to create and share the things we love most about Mario. If you’re a fan of Mario, and you’ve been looking for an excuse to fire up your Wii U, you should definitely considering picking up this game.

While having to wait to unlock all of the tools may be annoying to some, it’s not enough to dampen this title that will have gamers young and old clambering for their Wii U.