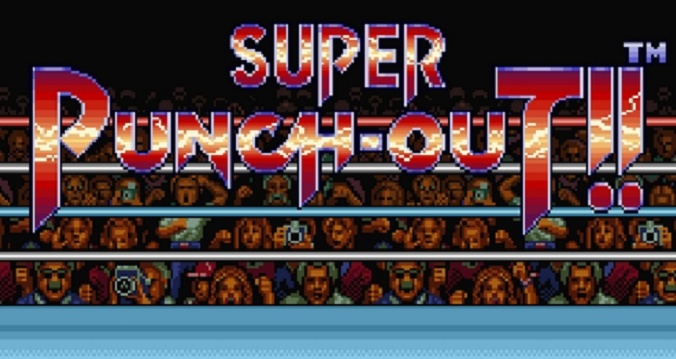 Super Punch-Out arrives on the Wii U Virtual Console!  Playing as an unnamed boxer you’ll fight your way up the ranks against a variety of colorful characters.  Several of the faces are recognizable favorites from the Arcade and NES entries – even the new opponents often share traits seen prior.  This sequel tends to have more dirty characters, who will kick, spit, headbutt, and use weapons among other things, giving this sequel its own unique feel. 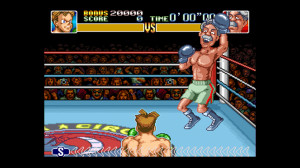 One of the biggest changes, at least from a visual perspective, is the see-through character sprite, closer to the arcade version than the more overhead view found in the first console release.  While I don’t necessarily find it preferable, it works quite well, and the increased size will probably be enjoyed even more by those who didn’t grow up with the 8-bit classic.  It does make the computer characters seem smaller by comparison, but they are still large, and their good animations are retained.  The larger color palette is noticeable, courtesy of the 16-bit power of the SNES.  On the audio end, it’s a mixed bag of some additional improvements and some cuts.  I personally find the music to be a bit on the generic side, and not as memorable as the NES tunes.  The sound effects are stronger though, and I appreciate how punches seem to pack much more power, and vocal snippets sound far clearer. 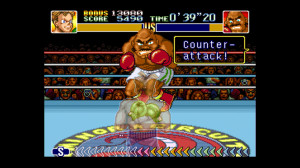 Controls are very good, which is important for a game that relies on careful timing.  I actually think Super Punch-Out has transitioned to the Wii U Virtual Console a fair bit better than its predecessor in this regard.  Playing on the Wii U GamePad seems quick and responsive without the slight lag I noticed from the NES VC release.  Earning stars through well-timed hits has been replaced with the arcade like meter that fills up slowly as you connect on multiple punches.  While I can’t say I like it better, it’s probably just as good.  For those who thought the NES version was too difficult, I think this change makes the game a bit easier to earn stronger punches.

Super Punch-Out has regrettably taken a big step backwards though, due to the elimination of multiple rounds. This choice unfortunately robs the game of much of its depth, as you can no longer adjust strategies in between – learning on the fly translates to more trial and error, and more losing.  In fact the speed of the solo round means sometimes boxer specific strategies will barely even have a chance to come into play before the match ends.

This choice further robs the game of much of its charm.  For one, there’s little opportunity for trash talk and memorable quotes from the competition.  This makes the still stereotyped boxers seem to have even less personality, magnified by the fact that many of them are repeats or minor variants from earlier games (and still using recycled character models).  Judge’s decisions have also been eliminated entirely.  Your unnamed fighter also has no trainer to hear advice from (and no pink jogging suit cut scenes either!).  The game doesn’t even have Mario as a referee, which explains why so many characters are able to fight dirty – Mario would never let such nonsense slide! 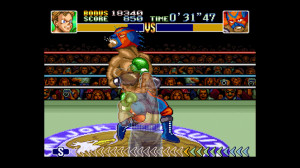 In other ways the game has improved nicely however.  Having completion times recorded is a strong addition that I welcome.  This gives the game further replay value – not that the Punch-Out games have ever really been lacking in that regard.  I also like the breakdown of the scoring system.  Many will appreciate battery backed saves over passwords as well, and the restore points available through the Wii U are there to take advantage of, should you choose.

Overall, Super Punch-Out!! is a good game.  It’s true that as a follow-up to the phenomenal NES classic, it’s disappointing to see some of the cuts – especially after a gap of seven years, this release feels like it’s coasting in some ways.  It never has seemed to capture gamer’s hearts like its console predecessor.  But it is still good fun, with plenty to offer in its own right.  If you’ve never played the original you’ll probably enjoy it even more.