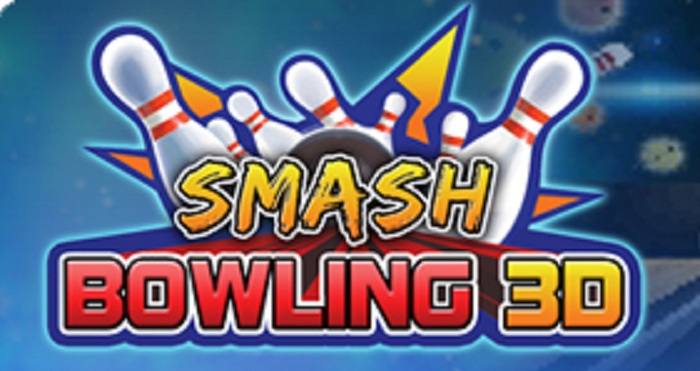 “As close as you can get to real bowling without wearing some one elses shoes.”   So proclaims Smash Bowling 3D’s manual.  But when you’re the third bowling game released on the eShop in the past 4 months, I guess there is an understandable desire to stand out as different from the competition.

Smash Bowling contains three game modes.  Career mode is your standard game that compiles, and allows you to keep track of various running statistics.  You can also earn a variety of trophies in this mode, as well as unlock things such as new lanes and ball designs. 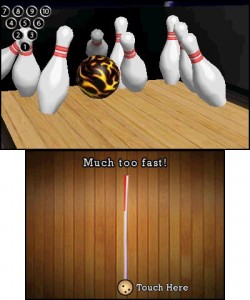 Multiplayer is available for up to four people.  It’s limited to just one system however, and is carried out by passing the 3DS back and forth.  While the lack of download play is puzzling and disappointing, this is actually a decent option to allow easy sharing of the game.

Lastly is a practice mode.  Here you can set the positions of pins, and try to tackle difficult situations like splits and such.  While it could prove to be a helpful addition for some,  its doubtful too many will want to spend much time with it.

Smash Bowling 3D offers both touch screen and button controls.  Each method has its own pros and cons.  Touch control allows for quicker and, generally, more precise throws.  However the ball path that you trace with the stylus to throw is very narrow, which can make it challenging to hit it just right.  The game will continually inform you that your throw is too fast or too slow. There is a definite learning curve present, and even with practice it doesn’t always seem to respond consistently.  Nevertheless, bowling with the stylus does feel more satisfying. 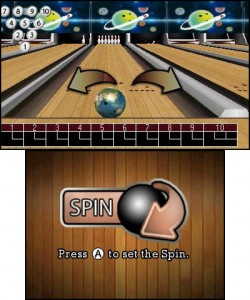 Traditional controls are a bit slower, with a separate screen for each action, and a less cluttered appearance.  Lining up to aim is faster though and adds challenge, especially when pins are near the gutter.   I don’t necessarily prefer one method over the other … they are both just okay.   I do have to say though that offering two separate control options is a very nice feature, and being able to switch between them on the fly makes them even more appreciated.

The visuals in Smash Bowling are, sadly, underwhelming.  For a game with 3D in the title, the effect isn’t done well, and finding the “sweet spot” will be an ongoing challenge.  It won’t be long before you switch to simple 2D.  The audio doesn’t fare much better either.  At best it’s average, and the repetitive music leaves something to be desired.

My biggest disappointment with Smash Bowling 3D is that it’s just lacking a good deal.  For instance, while it’s nice that you can choose different ball designs and colors, why can’t you choose the ball weight?  Battling against friends in multiplayer is fun, but why are there no cpu opponents?  For that matter, why are there no characters in the game at all?  You don’t even control an avatar, it is just a ball that rolls down the alley on its own.  There are no difficulty options, no tournament mode, etc … Inclusions such as these could have elevated this to a very good game.

Smash Bowling 3D is simply a bare bones title that, while not bad, doesn’t excel in any areas.  However if you’re a fan of the sport, the game might grow on you.  This is the type of download that you break out when you have just a few minutes to play.  If you’re expectations aren’t too high, Smash Bowling 3D might prove to be a decent, if unspectacular, time waster.