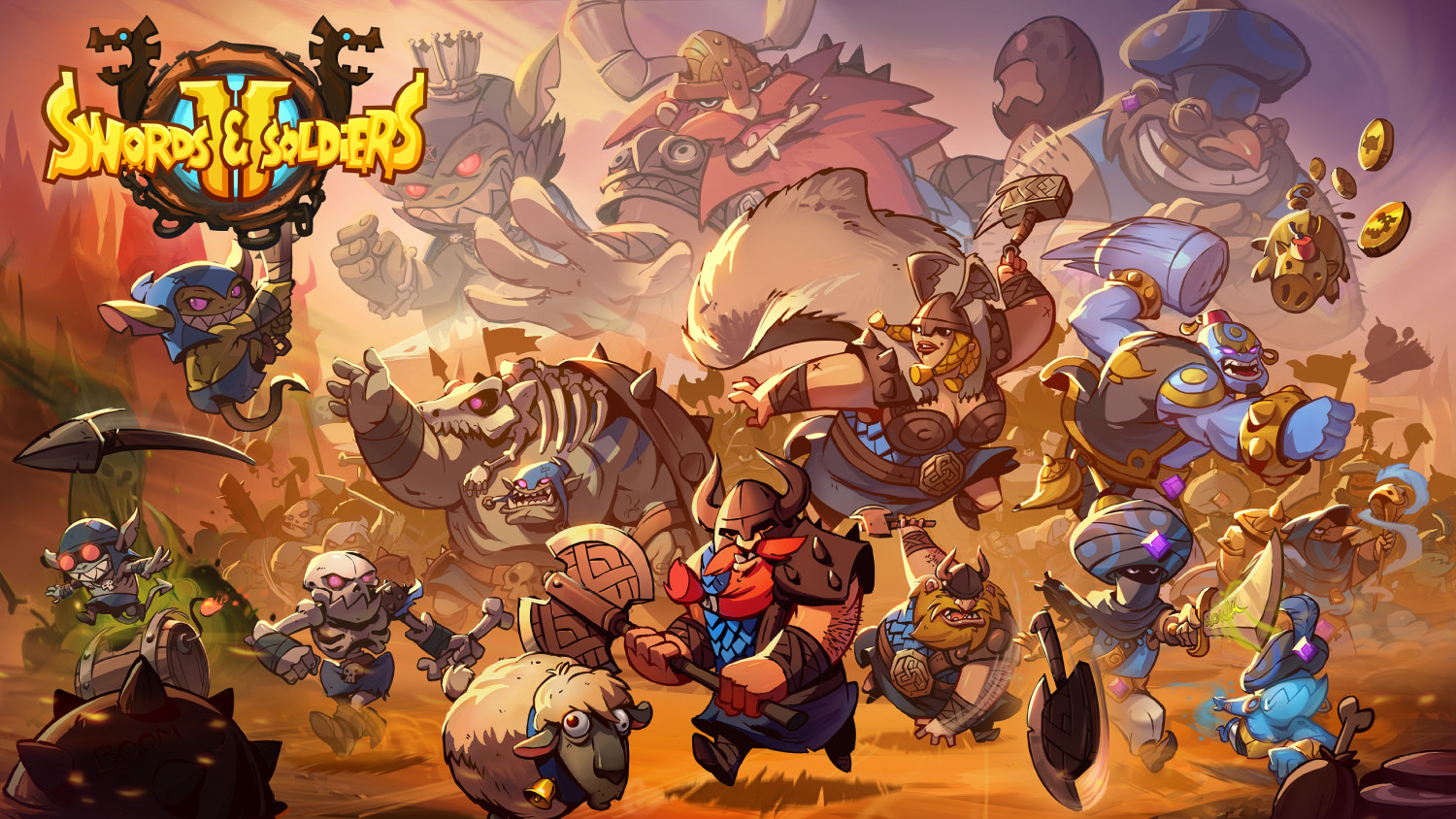 One of my favorite genres of all gaming would easily fall under the category of Platformers. They’re fast paced, require quick reflexes and my love for them is absolutely influenced by my early days of playing Mario. So when I first approached Swords and Soldiers 2 during PAX Prime 2014, I was a bit skeptical. I didn’t even know there was as Swords and Soldiers 2!

The biggest part of my skepticism was due to the fact that this game was a side scrolling Real Time Strategy (RTS). The majority of RTS games that I’ve played consisted of the usual grinding for gold, make some soldiers, advance to the right. Rinse, repeat and delete cause oh Lordy these games can be boring!

But, when I booted up the story mode, my attention was immediately grabbed by the sudden voice over and soon entertaining narration of an injured drinking Viking (who for some reason had a Scottish accent) named Brokenbeard. Well, ok so far off to a good start, but this is just a narration. Not even a taste of whats to come. Time to gather all of my cunning and whit, take on this genre that puts my platforming skills to a halt and my brain to the test.

Our story begins as mentioned by our guide Brokenbeard, in a dark cave as an army of demons led by Miss Chief, come across a magical wish granting lamp. Eager to make off with this symbol of phenomenal cosmic power, is the Persian army with their leader Al’Beard in hot pursuit to take back what is rightfully theirs!

While this story goes on, we change gears from damp caves to the green battlefields where we see Viking Chief Redbeard fighting off his nemesis aptly named Blackbeard (no relation to the pirate). At one point, the paths of both the Vikings & Persians cross with Chief Redbeard & The Kebab Shack owner Al’Yucaneet teaming up to chase after Blackbeard who is now in possession of the lamp!

On a race for wealth, revenge & the thrill of battle, our adventure takes off!

As previously mentioned, this is a type of game that requires more patience that other genres. But thankfully, this does not leave the experience dry & tasteless. Each playable faction tailors to their own specific themes. Vikings will have more Lightning, Norse magic and beards than you can throw an axe at. Persian armies rely on stealthy soldiers, genies and alchemy. While lastly demons have more emphasis in explosives & dark magic. While you may see similar soldiers in each faction, each have their own personalities and attack patterns, that truly make them unique.

Usually at the beginning of each match, you first need to collect enough gold to begin building your army. Through a leveling up system, that branches off into different pathways, its completely up to you if you want to grind for gold, unleash a massive battalion or build watch towers to slow forces down. Either way, money makes the world go round here. What? You don’t expect these people to fight for free do ya?

One of the features that really won me over with this game, was the fact that I couldn’t rely on similar tactics that were used in previous levels. While there were some that allowed me the breathing room to grind, there were others that demanded me to send out troops the second I could spawn them. There were even some maps that while I wasn’t tasked with destroying an enemy base, I instead needed to race against a sandstorm with limited materials. It’s the little things like this that can take a slow RTS and turn it into a fast paced experience!

When beginning the games tutorial, you have the choice of either using a Wii U Pro-Controller, the Wii U Gamepad or the Gamepads touch screen. While using the controller felt good and I was still able to win a few matches, I had a much more enjoyable time using the touch screen features, as it allowed me to survey my map at a faster pace as well as deploying troops. Either way, the user interface in this game is spot on, making it easier to switch controls in the off chance the Gamepad needs to charge.

Swords and Soldiers 2 also offers friends to battle against each other in custom two player matches with one player using the Gamepad screen, while the other uses a Pro-Controller and TV. After selecting your faction, you’re then given a variety of maps, each with their own special twist. Some maps will have shorter distances, portals that will take you to different locations, King of the Hill matches and much more. Just when I though that this game couldn’t surprise me enough, it certainly did when giving each map its own identity. Those who are absent a “Player 2” can still find fun in these maps by playing the Skirmish mode, which pits you against the games computer for a head on match.

In the end, I was pleasantly surprised with Swords and Soldiers 2. The developers put a lot of effort into this game with its humor and gameplay, to deliver a fun strategic adventure. The $19.99 USD price might cause some people to approach with caution, but don’t worry, this game has plenty of content to keep its replayability strong. If RTS games are not your thing but you’re willing to venture out, this is the game that I would highly recommend.

Swords and Soldiers 2 manages takes a slow paced genre and turns it into a hilarious fast paced game that keeps you on your toes with every level.