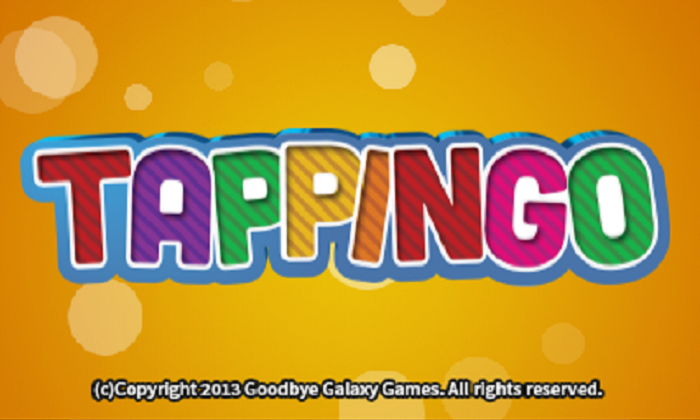 There’s been no shortage of Tappingo coverage from Pure Nintendo – I first posted about the game back in July.  Over several months we’ve seen the usual updates of new screenshots and such, and now with the finished product in hand we can finally play it.  So how does it measure up? 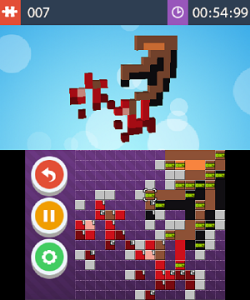 Tappingo looks a bit like picross at first glance – it’s played on a grid with small numbered boxes which gradually reveal a picture.  It isn’t just a matter of simply extending them in the right direction though, as lines keep moving in this variant.  A box may indicate the need to move three spaces, but unless there’s another line to stop it (or the screens edge) it may very well move six or seven.  While it did take me a few minutes to get a feel for things, the concept clicked pretty quickly.  There’s a tutorial puzzle and fine explanation in the digital manual which helps.

Tappingo is a bright and colorful game, whose retro inspired pixel art is fun to look at.  I especially enjoy the puzzles that give a nod to past Nintendo hardware!  The 3D doesn’t add a whole lot to be honest, but I appreciate having it on for when a puzzle is completed.  The music is bouncy and pleasant, and I can already see some of these tunes getting stuck in my head.  Tracks this enjoyable deserve a music player! 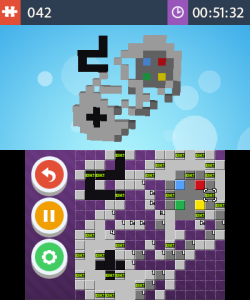 The game has near perfect stylus control, with traditional buttons also offered.  I do suggest playing this game on an XL model if possible though – some of the later grids are very small.  But challenge never results from poor control.  Rather it stems from making sure lines have been extended in the proper direction.  Getting down to the last box only to realize an earlier line should’ve gone left instead of right can knock you down a peg.  Lack of an undo button means you might have to deconstruct a good portion of the puzzle before finding where you took a wrong turn.  It’s a good challenge, but it doesn’t frustrate.

One of my few requests with Hugo Smits’ last game Color Commando (reviewed in the June issue of PNM) was for more content and replay value – I’m happy to say both have been addressed, in part, with Tappingo.  This game has over one hundred puzzles, so there’s a fair amount to do here.  Completion times are also recorded so that you can replay and try to finish puzzles faster.  Thankfully no strict time limit’s enforced, so you can still enjoy the game at your leisure. 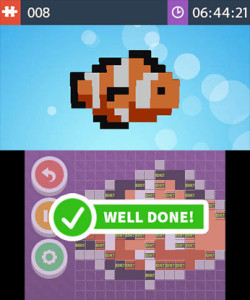 That said, a couple of things I really think should’ve been included are leaderboards and/or multiple profiles (they’d be a nice way to compare my skills with my wife’s puzzle prowess).  The game overview actually does say “You can challenge your friends or yourself to set a better time!” but without even a means to enter initials it’s not an ideal setup.  I hope a patch brings one or both of these things to better implement the game’s replay value.

Hugo Smits prior DSiWare game were very wallet friendly – both Ace Mathician and Color Commando (also published by Circle) were only $1.99, and Tappingo is close at just $2.99.  More important than carrying over the budget price though, it retains the fun of his prior games, making for a great 3DS debut!  It’s an addictive and polished game that’s taken a straightforward idea and put its own unique twist upon it.  Playing Tappingo puts me in a good mood – I recommend you download it today!