The Legend of Dark Witch was recently released on the 3DS eShop and it’s definitely one of the more challenging games I’ve played lately. This 2D side-scrolling game has some similarities to Mega Man, but also has some of its own features that set it apart.

You play as a dark witch named Zizou and your goal is to collect the missing Syega Crystals. There are 6 stages and they can be completed in any order. Whenever you defeat a boss, you are rewarded with their attack ability.

After defeating an enemy, something called Tres is collected. Tres looks like butterflies and make you more powerful and can give you the ability to float for a moment. Tres can also be used outside of stages to level up your abilities. 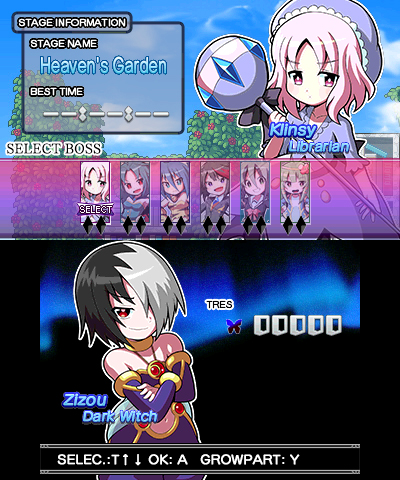 Most of the enemies you encounter are pretty easy to defeat, but there are enough tougher ones scattered around that make this game challenging. But even the more difficult enemies are nothing compared to the boss battles. I was playing on medium difficulty and it took me more than a few tries to beat some of the bosses. Once you recognize their attack pattern and figure out where to stand when they jump at you, it gets a little easier.

The music and sounds in the game are great. There is a different catchy theme for each stage and they quickly brought me back to the days of Super Nintendo.

The graphics are really nice. The environments are colorful and the animation is very smooth. There is no 3D support in the game, which I’m fine with because I don’t think it would really add much to the game. 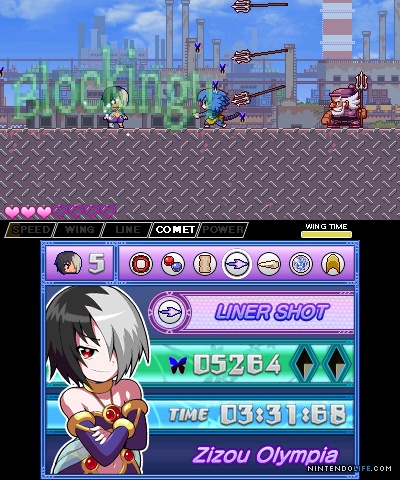 The 6 stages can easily be completed in about an hour by a pro gamer like myself, but the game isn’t really over at that point. A new character with different skills, strengths and weaknesses is unlocked once you complete the stages. Also, each level has hidden Pure Seyga crystals that unlock extra levels that allow you to improve your upgraded skills. And there is an achievement system that rewards you with crystals that can be used to purchase extra power, hearts and other stuff. All these things add to the replay value.

The Legend of Dark Witch is a well done game and definitely worth getting. With 3 difficulty levels, this game will be fun for those new to platformers and pros alike.