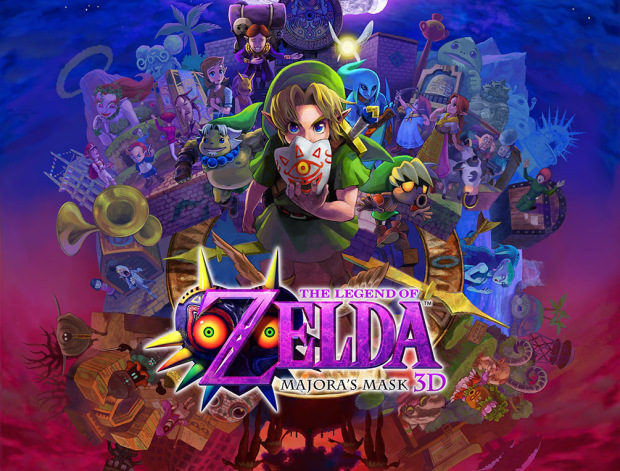 When I first saw the trailer revealed by Nintendo that a remake of one of my favorite Zelda games would soon be released on the 3DS, I screamed at octaves unimagined on any vocal scale. I wouldn’t be surprised at all if most Zelda fans imagined a remake would happen after playing Ocarina of Time 3D upon it’s release. Would this be a great remake like Ocarina? Or will Zelda fans be met with a terrible fate?

I won’t go too far into the story as I’ve actually reviewed the original title about a year ago. Fun fact: It was actually the first article that I wrote for Pure Nintendo and the article that helped me get into E3 2013! I’ll put a link to the article as it goes more in depth on what the game truly meant to me.

Our story begins with Link traveling through a dense forest in search of his lost partner from the previous title, Navi. Why he’s searching for her will forever remain a mystery, but I digress. Shortly later, Epona is startled by two faries sending Link flying off and rendered unconscious. A masked figure appears nabbing not only the Ocarina of Time, but Epona as well. After giving chase, our hero is not only transformed into a Deku Scrub but also lost Epona in the process. Not the greatest start to an adventure huh? Oh, did I forget to mention the large Moon that’ll destroy the land of Termina in only three days?

So let’s see. Lost horse, lost Ocarina capable of bending space and time and the world will end in three days. Easy, right?

When it comes to gameplay, it plays exactly like OoT 3D with the same button layouts so nothing new there. In the original Majora, there was an odd clock display that would give you an idea on how much time is left, but never really an accurate number. MM 3D now sports an accurate clock, making time specific meetings easier to make. Speaking of time accurate meetings, most Majora veterans will remember the Bomber’s Notebook.

The notebook this time around felt more like a daily planner and overall made reminders of certain side missions a lot easier and more manageable. I could even set alarms for certain objectives taking less stress off an already time saturated game. Aside from a daily planner, there’s a handy record of those you encounter with a slight hint on how to complete their given side quest. This makes for a handy check list for fellow completionist’s who plan on collecting everything this game has to offer.

While MM 3D is indeed a remake, this didn’t stop Nintendo from trying out new things to mix things up. I noticed that I couldn’t rely on everything I knew from my N64 days completely. For example: In the past, before I went into the Pirate’s Stonghold, I always went to Ikana Canyon, found the hidden solider and received the Stone Mask making me invisible. When I went looking for him, he was not in the same area I once remembered. I could tell you where to find him, but why spoil the fun. In the end, it will help if you recall previous events, but they may not deliver the same results.

Another factor that Zelda fans should take into account are the boss battles. In the N64 days, boss battles were pretty cut and dry. Exploit the weakness, attack, rinse and repeat. However, I noticed that there was a large eye representing Majora that would only reveal itself after some clever tactics, usually by using one of the three transforming mask’s.

Visually, the game is everything I expected and more. With the 3DS’s hardware, environments were more clear and previous blurry details were now vibrant. Much like OoT 3D, the 3D experience was more about depth rather than popping out making my playthrough easy on the eyes.

Overall there’s not much to say about this game other than it’s absolutely worth your time. There’s also not much to say about it seeing as though it is what it is, an HD remake. The story hasn’t changed in the past 15 years but the mix up of item/sidequest locations did make for a refreshing experience. With that said, I hope this is the last Zelda HD remake that we see in a long time. We’ve already seen Ocarina of Time, Wind Waker and now Majora’s Mask. It’s time for something new and it looks like we’ll get that later on this year.

While Story and Gameplay are similar to the original, Nintendo has added new twists and turns to keep the experience fresh.