One of the great things about indie games is that with enough time, patience, and perseverance, anyone who has a vision of a game in their head can bring it to life and share it with the world. While it’s true that many indie titles can be a mixed bag of good and bad ideas, sometimes you find a title that takes a simple concept, and makes it loads of fun. Tiny Galaxy, developed for the Wii U iby the one-man studio Arcane Pixel, is one of these games, even if it is a little rough around the edges. 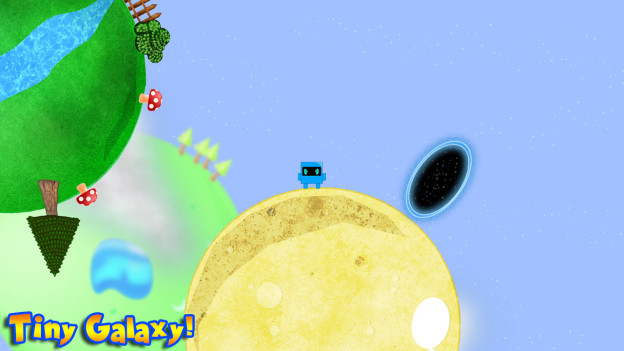 Presentation wise, Tiny Galaxy has some good things going for it. The story of a blue squared hero named Orion questing to recover a stolen pair of headphones may seem a little cheesy, sure, but when it comes to the platforming genre, story has always taken a backseat. The visuals for the game are bright and vibrant, and each of the six worlds’ you’ll explore each have their own fun themes that look great on both the Wii U’s game pad and your TV. The game also features a nice soundtrack, and while not all the songs were winners, I did find some of the tunes catchy enough to be pleasantly stuck in my head. 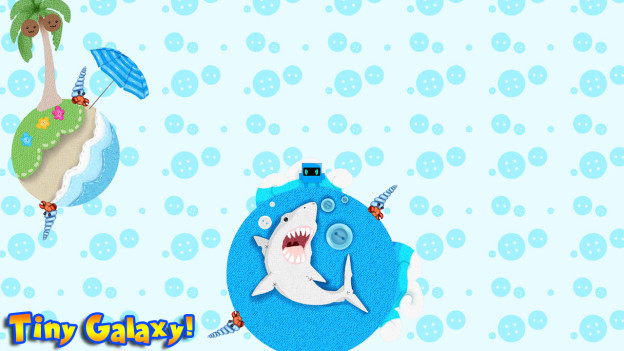 When it gets right down to it, however, the game play is Tiny Galaxy’s primary focus. Each of the game’s 60 stages will require you to navigate your way through a barrage of deadly obstacles as you leap from planet to planet to collect all three stars within a level, wherein a warp gate will spawn for you to find so you can exit the stage. Each planet has its own gravity, and while running around and switching between different planets may seem like it would be disorienting, the level’s are laid out in such a way that you’ll be able to keep track of where you have or haven’t been. 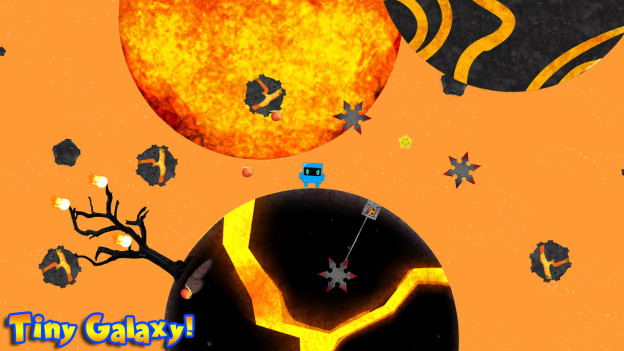 The challenge in Tiny Galaxy is definitely apparent right from the get go, and even in world one you’ll find yourself working hard to figure out the right timing for some of the jumps. While some of the levels can get frustrating, the controls are pretty tight, and for the most part any death you get will feel like it was your own fault. Luckily, the game lets you play the stages of a world in any order so you can skip a hard level and come back to it later, but ultimately you’ll be confined to a world until you’ve collected all the stars from every level in that world. Each world also has its own boss, and dodging their projectiles so you can hit switches that launch missiles of your own is a nice change of pace. 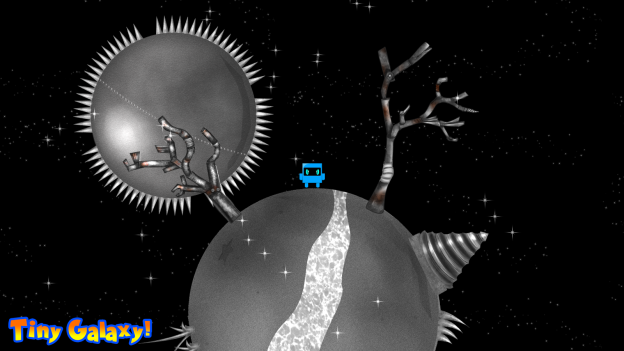 While the game play of Tiny Galaxy may be fun and challenging, the game does have its fair share of problems. Occasionally, if you try to jump from one planet to another at an odd angle, the game will force Orion back towards the planet he jumped from most likely resulting in your death. At other times, due to another planet being a little too close to a jump you need to make, you might find yourself accidentally launching yourself to the next planet on accident, which can be annoying. Thankfully, this is only a problem on a select few levels. 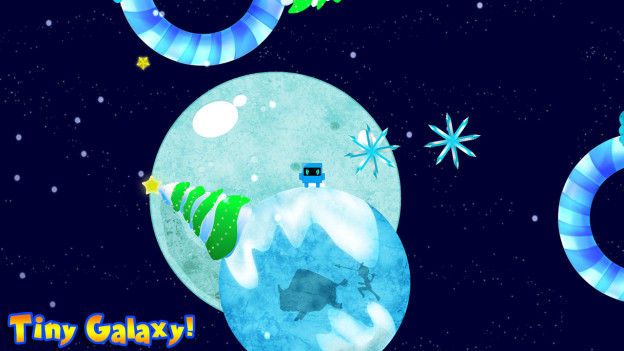 Menus within the game also hurt Tiny Galaxy’s functionality a bit. There is no way to tell whether you’ve beaten a level or not, and if you play the stages out of order you may find yourself missing some stars in a world without knowing which stage to look for them in. After quitting a stage you’re also sent back to the first world on the stage select screen, and while it’s a minor issue, it can be a pain having to scroll through all the worlds to get back to whatever level you wish to tackle next. 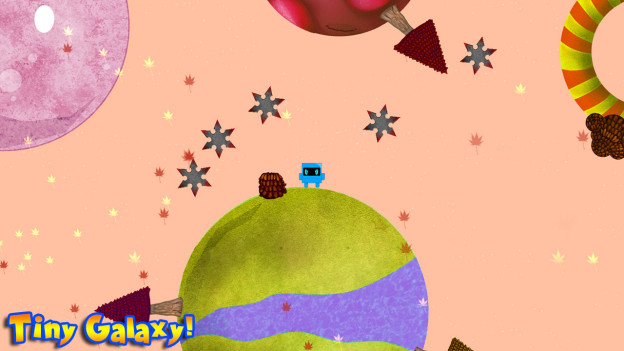 As I said before, indie games can sometimes be a mixed bag, and Tiny Galaxy certainly feels unpolished in some areas. This doesn’t mean, however, that it is a bad game. The game’s controls are tight, and the challenging platforming is fun and rewarding if you enjoy tough games. The art style of the game is a pleasure to look at, and most of the music in the game is pretty enjoyable. While the flaws in the game’s menu system and the occasional hiccup in the game play make this a title that’s hard to recommend to everyone, there is still some great fun to be had for gamers who enjoy a really tough platforming challenge.

While Tiny Galaxy’s menu system may give the game an unpolished feeling, the game play and level design are quite fun for those who enjoy a difficult platforming challenge.

PN at PAX East 2015 – Impressions on Adventures of Pip

6 years ago
Wii U

Rock Band 4 for Wii U Not Ruled Out