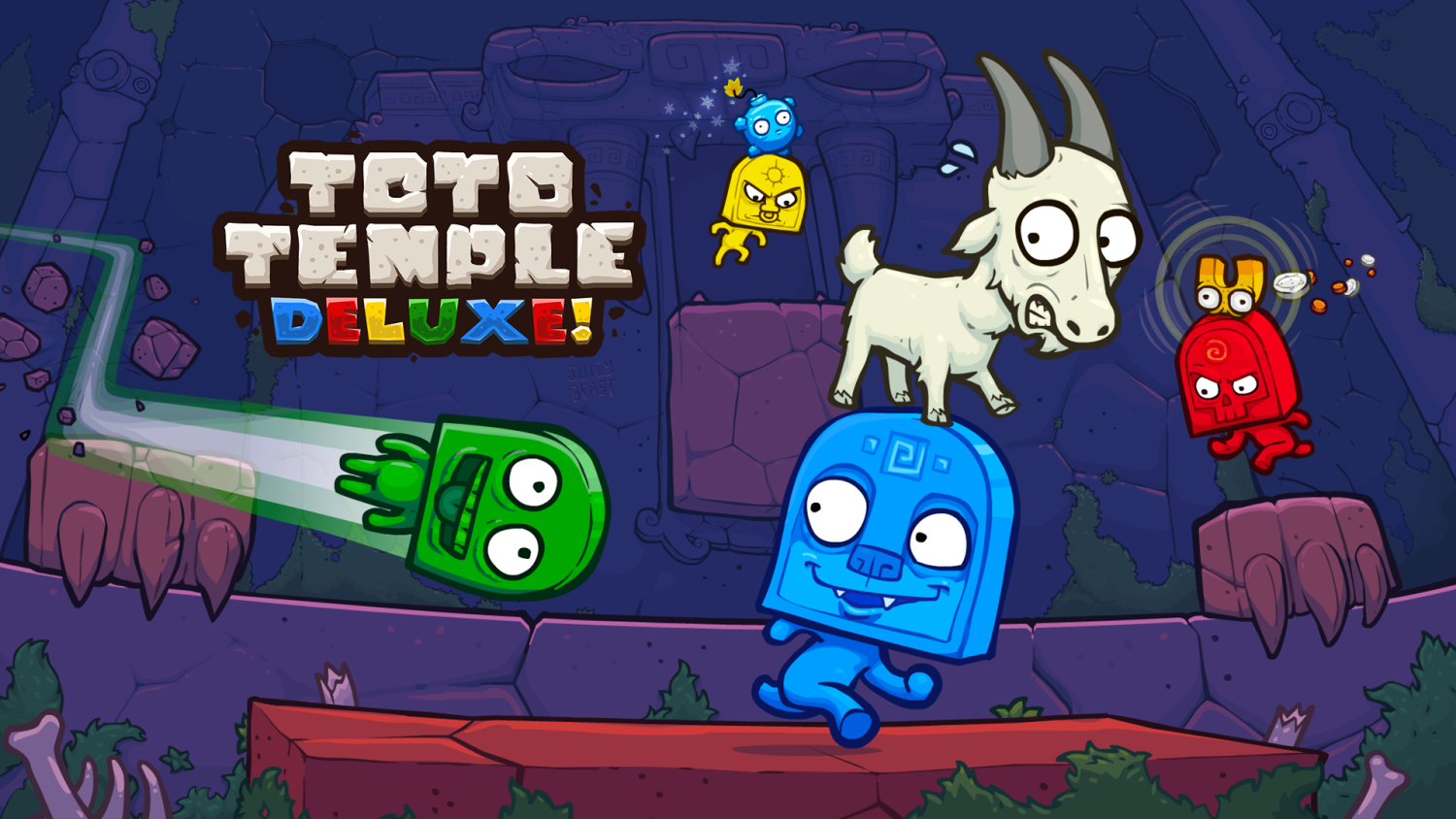 Have you ever had one of those days where you’re with a group of your friends, and you find yourself bored out of your mind? Do you find yourself wishing you and your friends could start an awesome game of tag? Does the idea of adding a goat into the mix sound appealing to you? If you answered yes to all three questions, then I’d suggest you go see a very good psychologist. I’d also recommend checking out Toto Temple Deluxe on the Wii U. 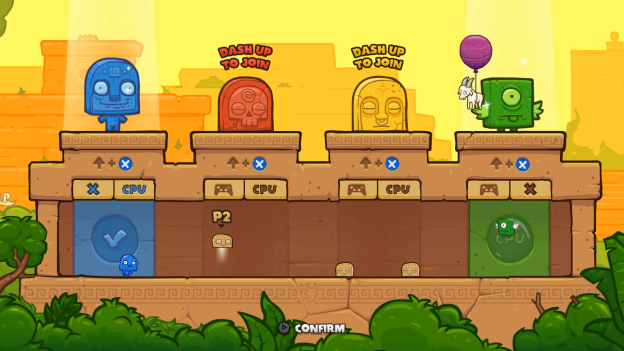 Developed by Indie Dev. studio, Juicy Beast, Toto Temple Deluxe is best described as a high-octane game of tag where you and your friends dash around the screen trying to steal an egg-laying goat from each other; while at the same time trying to keep said goat on top of your head for as long as possible. It may be a bizarre premise, but the simplicity of the game play paired with the intensity of local multiplayer makes this title great fun to play.

It is important to note that even though the game is best enjoyed with a group of friends, (Up to four can play at once); you are able to play against computer-controlled opponents for a single player experience. There are three modes for you to choose from, and these include: Classic Mode, Bomb Mode, and Target Challenge Mode. 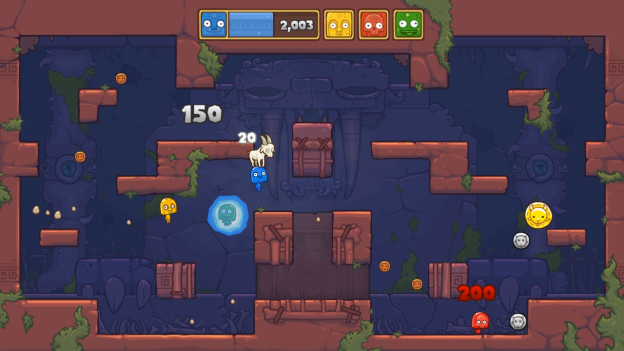 Classic Mode pits you and up to three other players against each other as you dash around trying to steal the goat from the other players. The longer you keep the goat in your possession, the more points you’ll earn. The first person to reach 3,000 points is deemed the winner. Controlling your Tiki avatar is fluid and responsive, and in no time flat you’ll master the quick movements of the infinite dash that you have at your disposal. Pressing X does your dash move, and using the D-pad or the control stick allows you to quickly adjust your direction. Crash into the player who has the goat, and you’ll steal it from them. For the player trying to keep the goat from the others, pressing X will give you a very brief shield to use to block your attackers. It’s simple, but fun, and the more people you can have join in the better. 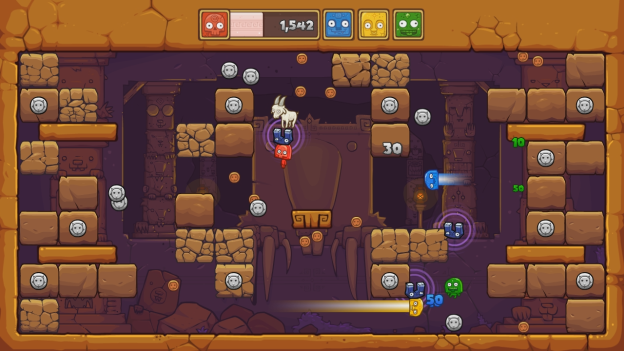 Bomb mode offers a different challenge, as this time the goat you are trying to steal is set to explode. The longer you hold onto the goat, the more the timer will run down. Once the goat explodes, any nearby players hit by the explosion will be knocked out of the competition, netting you points. Anytime the goat is stolen, the timer restarts, so this mode creates a fun blend of “keep away” and “cat and mouse” to spice up the game play.

Target Challenge mode simply places targets around the arena as you attempt to break as many of them as possible to rack up a high score during the time limit. It’s nothing too ground breaking, but it makes for some nice additional content to play through when you need a change of pace. 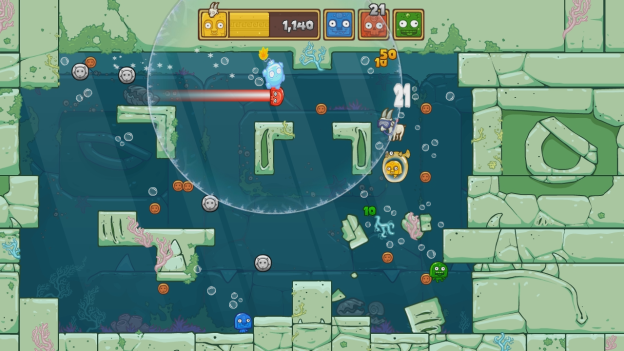 Presentation-wise, the game is what you expect from an Indie developer. The graphics are pleasing to look at, and the Tiki character’s you play as come in different colors so it is easy to keep track of your avatar during the heat of the moment. There is a nice selection of different arenas to choose from, and the music and sound effects lend themselves well to the overall experience. In all aspects of the game, it feels well crafted. 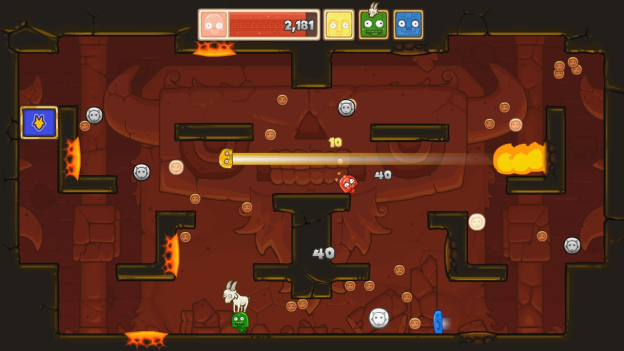 Toto Temple Deluxe is a multiplayer game through and through, and much of the enjoyment you’ll get out of it is when you are huddled on the couch competing against each other and bragging about your goat stealing abilities. While you can certainly enjoy the game by yourself, you’ll find the AI isn’t too difficult to beat, thus shortening your time with the game drastically. The game does have tight controls and some great game play going for it though, so if you’re in the market for a party game to try out with a group of friends, this is definitely a title to take a look at. If you’re more into the solo gaming experience, however, you won’t find much to keep you coming back to this title.

A Scapegoat From Boredom

Toto Temple Deluxe is a well crafted game with tight controls and lots of action but unless you’re playing with a group of friends, there isn’t much reason to stick around for long.