As a child, playtime usually meant one thing – setting up intricate and complex towers of toys before deliberately destroying them with cars, action figures and anything else in reaching distance. In my juvenile and imaginative mind I would envisage Hollywood style explosions blasting around me. Wobbly Tooth Games’ Toy Stunt Bike on the 3DS is an embodiment of that very youthful, fantastical joy and will leave your destructive ten year old self grinning at the spectacle of carnage that it offers.

Toy Stunt Bike involves exactly what it says on the screen. Taking control of a polyvinyl dare-devil, you tackle a series of jumps and other obstacles in a dash to get to the finish line. TSB features similar gameplay to that of Trials and other motorcycle-centric titles. It is a physics-based racer/platformer that involves you jetting around as a die cast stuntman on (as the name suggests) a Toy Stunt Bike. However, unlike most motorcycle games, you find yourself mastering a number of courses situated in a magnified domestic setting (think Evel Knievel in the Toy Story universe). Your miniature bike takes you through bedrooms, bathrooms, gardens and various other household locales and involves you driving over ramps made from rulers and leaping over toilet bowl canyons. Scoring on each course is based on the ability to earn three trophies which are given for the total time of completion, the collection of flags which can be picked up along the way and of course performing stunts, ranging from achieving good air time, to pulling off wheelies. 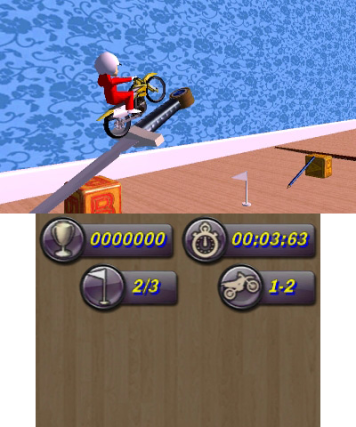 The bike is mightier than the sword.

The control scheme is simple and easy to adapt to. You accelerate with the A button, Brake with the B button, and through tilting the thumb pad you can lean yourself forwards or backwards, essentially altering the bikes trajectory and allowing you to perform flips and master landings. You control the rider, as opposed to the bike itself, which allows for some humorous post-crash fun as wiggling around with the thumb pad causes your dismounted stuntman to perform a plethora of rolls and flips. One can even cause his lifeless, limp torso do the worm. Pointless, but hilarious nonetheless.

TSB offers just the right amount of difficulty, as the challenge gradually increases throughout each set of levels. At times TSB is ludicrously simple, but even this isn’t necessarily bad, as it’s on these easier levels that you’ll happily “bail” your rider off his bike just to see him hurtle through the air head first into the nearest obstacle, wincing and laughing upon impact. You’ll find yourself pondering “what happens if I crash into this” or “I wonder if I can get him impaled on that”. Seeing the consequences of your little action figure’s collisions are where most of the fun is found, and with the stage’s relatively short lengths and numerous checkpoints, messing up on purpose doesn’t mean you’ll be replaying portions of the game needlessly. Restarting at one of these checkpoints will return the timer back to when the checkpoint was initially reached, meaning that you’re not being punished for any mistakes, be them deliberate or not. The structuring of each level makes TSB incredibly forgiving and completing each course is more a pleasant challenge as opposed to an uphill struggle. The bike can feel a bit sluggish, but this only places more incentive on performing gnarly tricks as opposed to finishing each course in the fastest time possible. 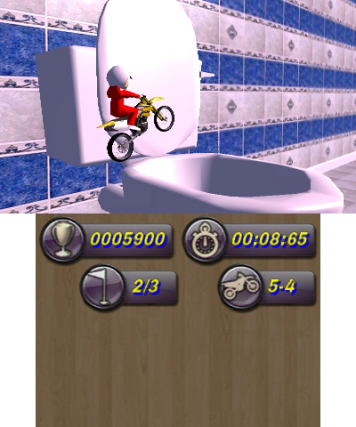 A deadly (and smelly) jump.

The variety found within the 60 courses isn’t staggering. Furniture may be rearranged slightly or you may come across a new hazard every so often, but by the fifth course of each location you’ll find yourself eager to progress onto the next room for a change of scenery. The visuals are a little dull and the odd book or spade does little to take your attention away from the dull and repetitive backdrops. However, being burned on a hot stove or having your tyres punctured by a horde of thumb tacks are just a few of the nice little touches which give more substance to your surroundings. The crew at Wobbly Tooth Games can be forgiven for not pouring resources into the visuals, as the majority of your attention will be placed solely on successfully controlling your bike, and the lackluster backdrops certainly don’t affect the overall experience.

The price of TSB is reasonable, despite the 3DS version not offering a great deal more than the cheaper iPhone counterparts. There are a great deal more levels than the original’s woeful 10, but the five courses on each stage are merely rearranged versions of one another, making them all feel rather similar. Extra features such as Bike customisation and a replay function to relive and share all those bone-breaking moments would have been nice inclusions to flesh the experience out a little further, and (like the Xbox 360 version) the ability to play as your own mii avatar would have been welcome. Overall, TSB doesn’t do much wrong, the extra levels will keep your attention for longer, and the ability to play with buttons and a circle pad suits the delicate controls more than the touch screen alternative. 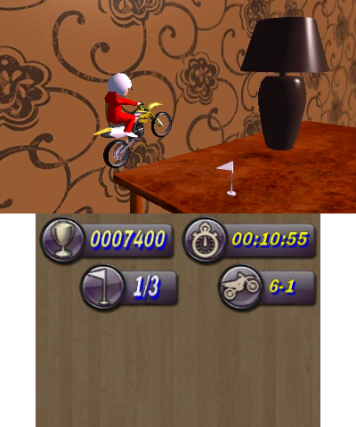 Toy Stunt Bike is an enjoyable experience. It’s certainly no masterpiece of gaming, but it is a game that deserves its inclusion in anyone’s 3DS digital library. Toy Stunt Bike isn’t a title that will keep you burning rubber for hours on end, but you will find yourself happily coming back to in short bursts. If all else fails, Toy Stunt Bike is worth playing for the laughs alone.