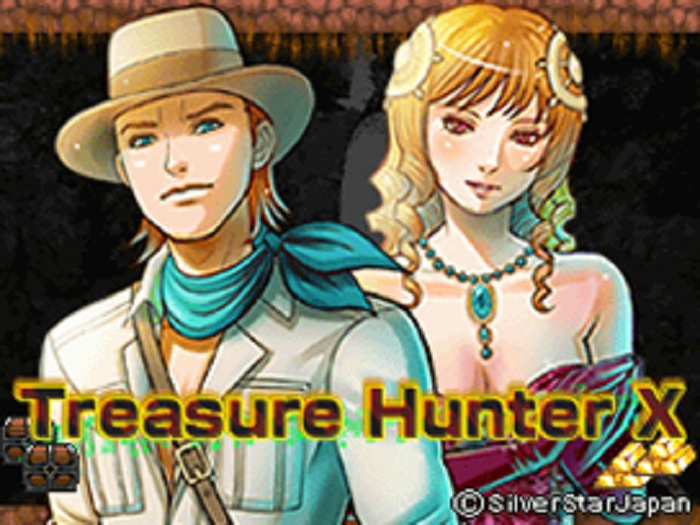 Like the recently reviewed Quick Fill Q, Treasure Hunter X is yet another DSi download that saw a massive delay between its initial U.S. release back in early 2011, and its European one just last week.  Thankfully Treasure Hunter X is a very solid little game, more deserving of reaching a wider audience. 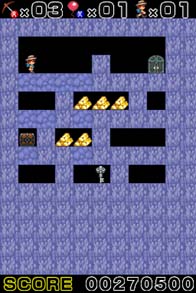 As the title implies, this is a treasure hunting game with your goals being to find as much loot as possible within each level while avoiding enemies and ultimately finding the key to the exit door.  It’s a common enough premise, and one that you’ve likely seen or played similar before.  However it’s fairly well executed and with limits placed on your inventory (pickaxes and balloons) and number of lives, plus cleverly placed items and obstacles, it proves to be a pretty fun and challenging affair.  And it’s not the sort of game you’ll buzz through quickly … even after exiting a level you might want to replay it again, realizing you didn’t grab all the treasure your first time through for the ‘Perfect Bonus’. 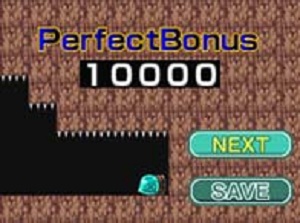 Control is basic, eschewing the touch screen in favor of more practical pure button control.  There were instances, mainly early on, when I broke through the wrong section of ground because I wasn’t lined up just right (something you’ll learn to adjust around over time)  Diagonal digging also caused some occasional hiccups, but it wasn’t so much annoying as just quirky (well, except on the icy levels … the lack of precision does hurt there!)  Truthfully, the control scheme kind of meshes with this style of game (for better or worse) and adds to the 8 bit challenge that gamers like myself ,who grew up with titles like this on the Atari, NES, and Amiga, are accustomed to.  One suggestion – if you play this game on your 3DS, use the d-pad as it’s much tighter and responds quicker. 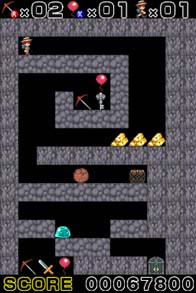 Graphically, this game has modest visuals (perhaps even a touch blurry) that are certainly nothing special.  They get the job done though, and are fine in an old school kind of way, which fits well enough considering that’s what this game is.  Even though the whole game takes place underground, limiting what it can do visually, there is still satisfactory use of color.  Beyond the simple browns used to represent types of dirt, there are the greys of the rocks, blues for ice, animated colorful monsters, and treasures of different colors of the rainbow. 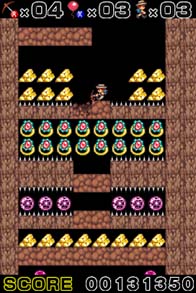 While the graphics do just enough right, the music goes above and beyond.  It’s nearly epic, and really heightens the amount of enjoyment I have with this game.  I’ve said it before, and I’ll say it again … a limited number of musical tracks isn’t always a bad thing as long as the tunes are good, and in this game they are very good!

To elaborate on the game’s challenge a bit more, besides the limited lives and tools you have to work with, the monsters you encounter also need to be dealt with.  You can stop them by digging a hole in the ground with your pickaxe, eliminating them with a boulder, or simply ignore them all together if possible.  Thankfully the game does allow you to fall the length of the level without taking damage, so that is a plus and one option when dealing with many of the monsters.   Other obstacles include spikes (which will result in instant failure if touched) or certain treasure chests that trigger what appear to be poison gas traps.  Lastly, there is challenge in the fact that you can’t pan around and view the entire stage at will.  Thankfully, saving after each successful completion eliminates some of the frustration that might cause, and really it’s more fun to experiment first hand anyway. 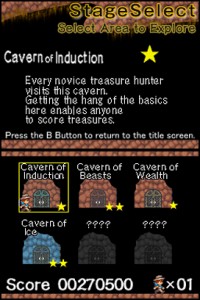 My biggest, and perhaps only major disappointment with Treasure Hunter X, is that while you can select which cavern you want to explore, you can’t select a level within the stage.  You’ll be forced to replay each and every one, which is such a silly oversight I have wonder how the game was released with it intact.  The game is still fun, don’t get me wrong, but boy does that choice hurt.  It also affects the high score system, which is essentially rendered useless as a result.

Treasure Hunter X has its share of weaknesses, but overall it turns out to be a very good download, especially for its budget $1.99 price point.  With its challenge, adoption of elements from classic games, and catchy music, it’ll be well worth it for gamers looking for a throwback to games of old.  Even though it doesn’t offer much flare, it mostly accomplishes what it set out to do, and ends up being much better than the sum of its parts.  Check this one out … it’ll grow on you.