Trine 2: Director’s Cut is an action-platformer, puzzle game developed by Frozenbyte.  This is Frozenbyte’s first self-published game and includes the original game, the ‘Goblin Menace’ expansion, with enhanced controls that utilize the GamePad, and a Wii U exclusive level called ‘Dwarven Caverns’.  Trine 2 on the Wii U offers single player and both local and online multiplayer. Trine 2 is one of the best gaming experiences I have had on the Wii U so far. 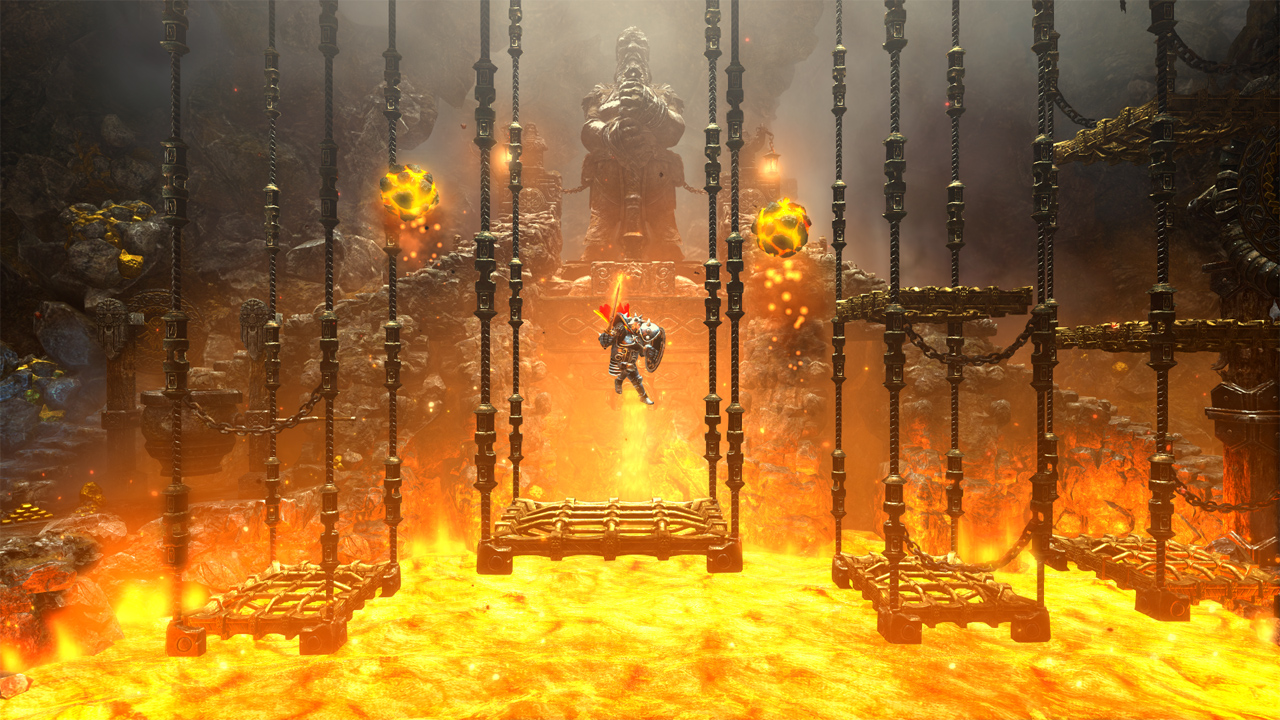 I must begin this review by saying that this has to be one of the most visually stunning games that I have seen on the Wii U.  The environments are very colorful and detailed.  There is not one inch of this game that looks like it has not been designed down to the tiniest detail.  With that being said the music is also very nice and fits well within Trine 2, but the looping tracks can become an annoyance if any length of time is spent within any particular level.  During most of my time playing Trine 2 I hardly even noticed the repetitive music because in every section of the game I am completely floored visually by something new or so engrossed in solving the puzzle I am currently facing.  Players are introduced to the fantastic visual design of Trine 2 as soon as they reach the game’s title screen.  Upon reaching the title screen, there is an opportunity to experiment with the GamePad’s controls and familiarize oneself with the three characters that you will be playing in Trine 2.  I actually spent a half hour alone just in the title screen messing with the characters and game controls when I first started playing the game.  After proceeding into the actual gameplay I was wowed, over and over again, about things as simple as swinging lanterns, to the way a character’s shadow dances on the wall with every flicker of a fire.  Trine 2’s visual design alone makes this game a must have for any Wii U owner.  The gameplay only enhances this visual journey through an extensive single player story mode that is hard to put down. 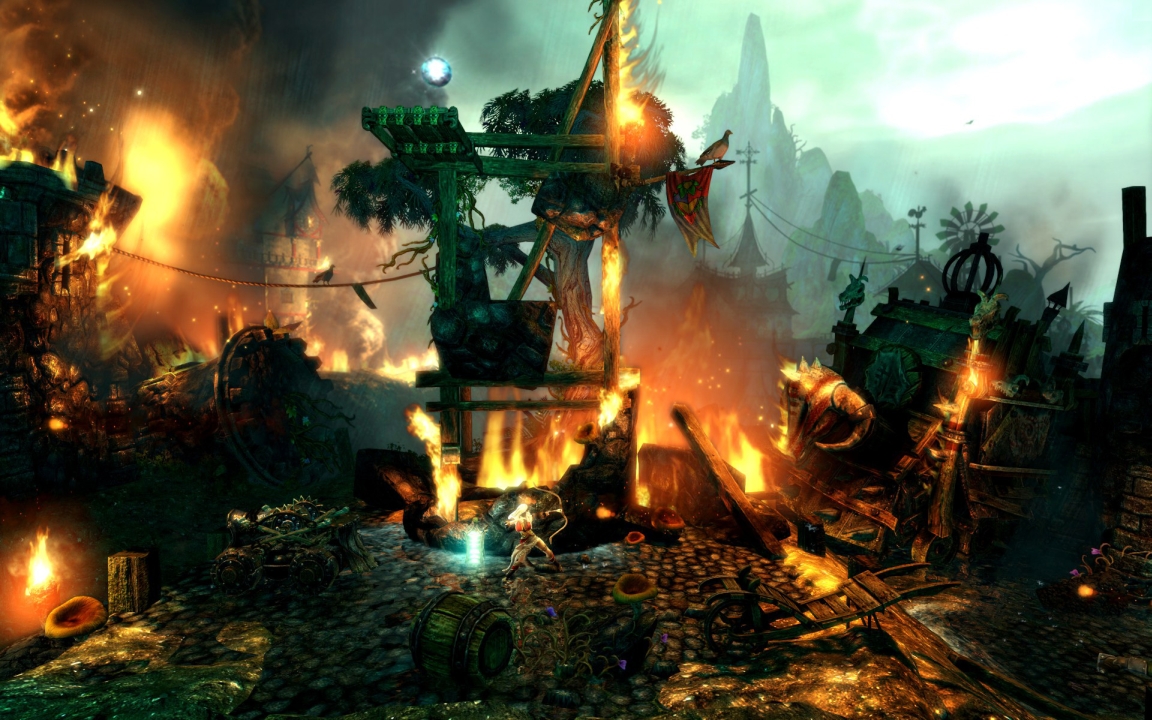 In Trine 2: Director’s Cut the player is put in control of three different characters.  The three characters are as follows:  Amadeus, a wizard, which has the ability to manipulate objects by not only moving them but also by conjuring boxes and planks out of thin air.  Zoya, a thief, can move stealthily amongst enemies and grapple to wooden ledges or fight enemies from a distance using her archery abilities.  Pontius, a knight, is very strong and is great when in combat or when  needed to smash through a wall.  My favorite character to use in the game is Zoya because she seems to be the most agile of the group but I also find that I use Amadeus quite often as well.  All of the characters at one point or the other will be used during the game and sometimes all of them are utilized within seconds of one another.  Each character has a skill tree that has a variety of abilities for ‘purchase’.  These abilities are purchased after a player levels up and leveling up is accomplished by collecting magical vials that are scattered throughout the game environment.  Fortunately when new skills are purchased this does not add a new control but rather improves upon already existing abilities.  This means that the simplicity of the controls can be maintained throughout the game. 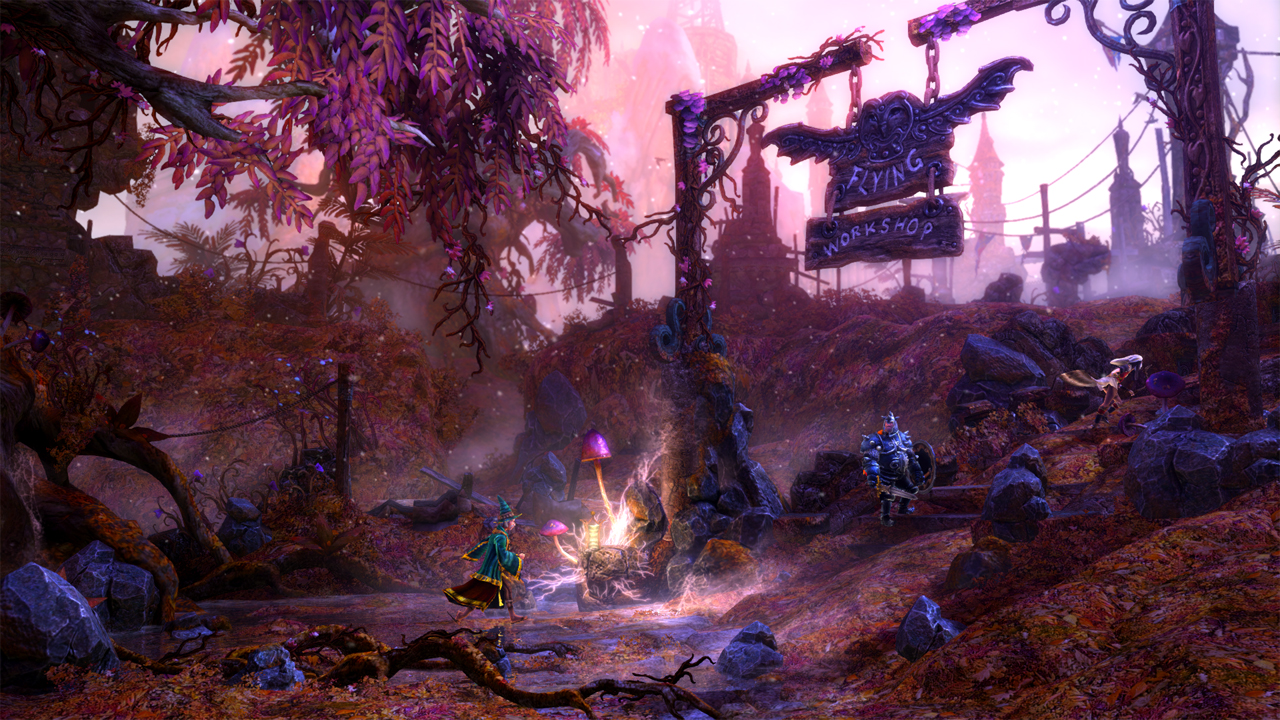 There are games that have many different controls and end up becoming very complex because of it but this is not the case in Trine 2.  The various controls for the different characters are almost the same with only minor tweaks based on each of the characters’ unique abilities.  Many of Trine 2’s controls can even be performed exclusively using the buttons or the GamePad’s touch screen depending on personal preferences.  For instance when targeting something to levitate, shoot an arrow at, or raise the shield, all can be done using the right analog stick or simply by touching the GamePad’s screen.  This flexibility in the controls extends to most of the other abilities for the characters.  One of my only gripes regarding the game’s controls is that I wish the touchscreen was a tad bit more responsive because Trine 2 is a game that I much rather use my finger to use the touchscreen.  For example, were a few moments in the game where i was using Amadeus to conjure a box and after trying several times with my finger, I ended up whipping out the stylus to get the desired result.  But in contrast, I am very grateful that Frozenbyte made the process of switching between the three characters quick and easy by a simple press of the GamePad’s R button or tap of the touchscreen.  Because of the simplicity of Trine 2’s controls the players are able to fully enjoy the experience that the game has to offer. 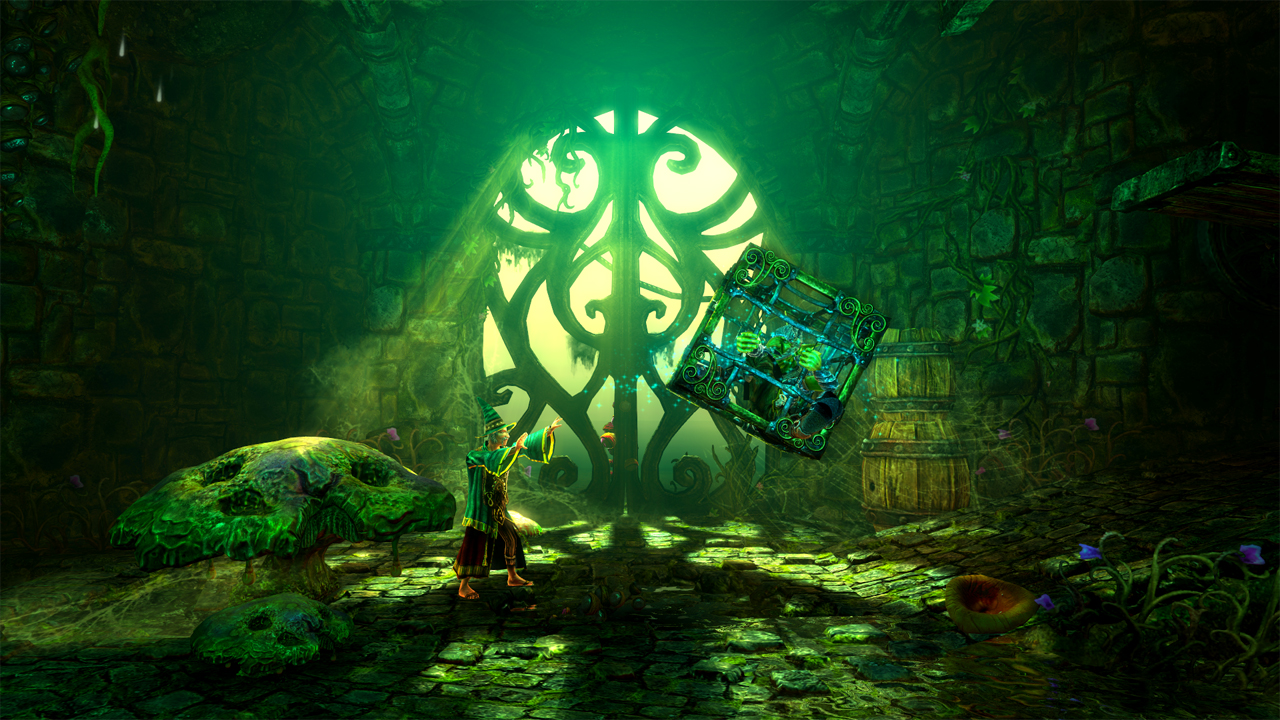 The single player for Trine 2 is essentially a story mode that is broken out into 20 different levels each with their own unique themes.  These themes are very different experiences all within the same game.  Each level provides new obstacles and gameplay mechanics and uses puzzle solving very heavily which can often require the use of all three characters in one way or another to be able to move onto the next puzzle.  Even ‘boss’ battles typically involve some sort of puzzle solving! The puzzles in Trine 2 are all different and some have one solution while others can be solved in a variety of ways depending on how the player approaches the problem.  The puzzle solving mechanic is also supplemented by a copious amount of hidden areas and hard to reach items that sometimes take quite a bit of creativity on the players’ part to reach.  Puzzles were also a lot of fun to play with friends.

There are local and online multiplayer options available in Trine 2.  I found that while playing multiplayer I was able to discover new solutions to the same puzzle and help others through difficult puzzles in the game.  This does come in handy because there are plenty of puzzles in Trine 2 that had me stumped for more than a few minutes.  I have not spent much time playing Trine 2 multiplayer but in the time I have spent playing it I have enjoyed the experience.  Trine 2 does take quite a bit of cooperation though. So if you intend on making any progress in multiplayer,  players must be willing to work together or else you will not get much accomplished. 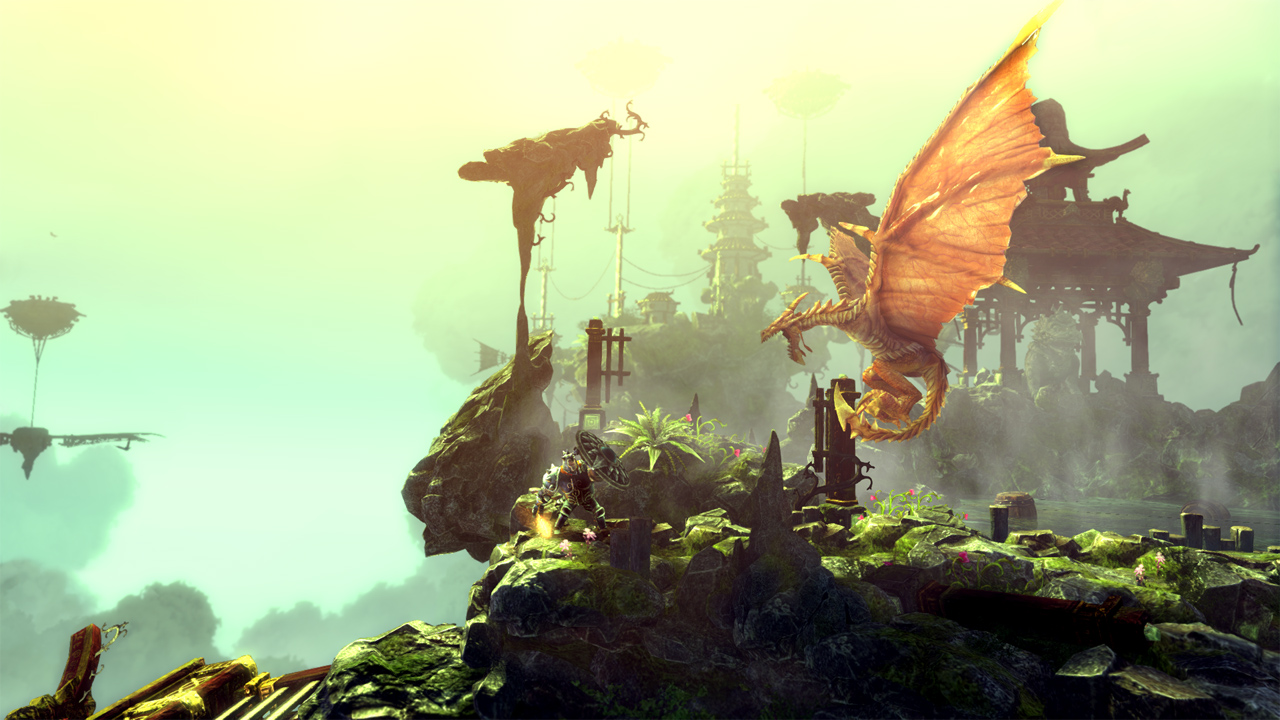 I was very pleased that Frozenbyte took advantage of the load screens between levels to provide interesting narrative transitions which made the load screens more bearable.  The one small thing I found kind of disappointing throughout my time with Trine 2 was that after enemies died they would sometimes lie on the ground and twitch as if having a seizure.  This did not take away from the gameplay at all but was disappointing to see in such a detailed and polished game.  Trine 2: Director’s Cut is a fine game all around and has a ton of content to play through.  I have been playing the game for 7 hours and have yet to reach the half-way point.  The puzzles keep me coming back for more and make the game very difficult to walk away from.  Trine 2 is one of my favorite games on the Wii U so far and is a must have for anyone looking for a grand adventure that is one of the best looking games on the Wii U and plays really great using the GamePad.