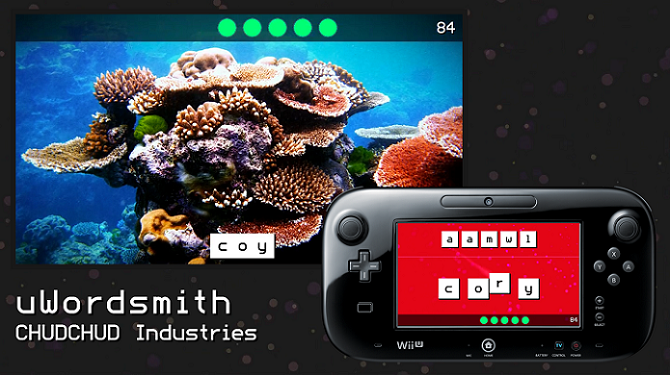 Word games can be good fun and uWordsmith is no exception, although the fun will likely be short-lived.  With three different modes, multiplayer, and stars for replayability, this game has a decent amount of content for its price, but a sizable shortcoming makes everything far too repetitive.

This game has you dragging and sorting letters on the GamePad to spell out a displayed photo.  Arcade mode is your basic timed affair.  Challenge mode has the photos sorted by categories.  Mosaic is the last, which gradually reveals a photo in tiles.  There are three difficulty settings to challenge the whole family.  Multiplayer is enjoyable, but it’s not setup for simultaneous play so you’ll need to take turns.  Some nice music and effects are heard in the background.

There are some good photos presented here, and they are crisp and clear.  Being limited to the television only though,  there’s no Off-TV play.  Worse, the amount of photos is scant.  We started seeing repeats in arcade mode as early as our second game!  Challenge mode fares even worse for repeat photos.  The shortage makes this a very repetitive game.  A star system encourages replayability (and is needed as additional content is locked out) but the fun is dampened when you’re seeing and arranging the same exact photos over and over again.

The ‘Tons of Content’ advertised just doesn’t really add up in-game as you’d expect.  While the mode number is adequate and the selection of categories is fine, the limited photos have a real adverse effect on the content.  In reality it’s more ‘Tons of repetitive content’ – it makes me wonder, was this game released too early?  I would gladly pay more for a game with a wider selection of photos!

For an indie eShop game uWordsmith isn’t bad for just $1.99, but I doubt it will hold your interest for very long.  You’ll see all it has to offer in a short amount of time.  It deserves better – this is a good concept and foundation but with a limited execution.  I’d like to see the game fleshed out with some DLC so it can have a reasonable amount of photos and offer some longer term fun.  Thankfully this is being planned.  As it stands now, this could make for a good family night of entertainment so long as expectations are kept modest.

For an indie eShop game uWordsmith isn’t bad for just $1.99, but I doubt it will hold your interest for very long in its present state.