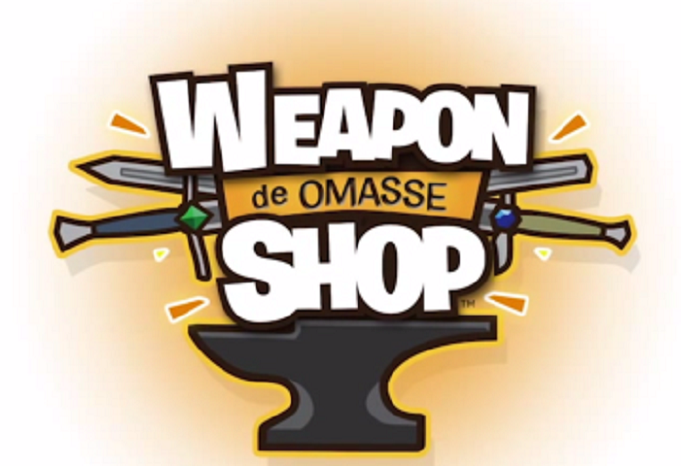 Weapon Shop de Omasse is an … interesting game for sure.  Admittedly that statement is pretty cliché, even more so if you’ve experienced other of the Guild series titles.  They are known for their unique elements, and Weapon Shop is certainly no exception.  RPG’s aren’t in short supply, but rather than playing as a typical band of heroes on a quest to save the world, you’re instead the young apprentice of a humble shopkeeper, supplying said heroes with all manner of armaments – forging them via a rhythm like game manner. 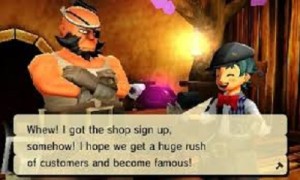 The first time you load up the game a primitive PC style RPG actually appears – yes Weapon Shop is a game within a game.  The overall tale is about the use of medicinal revival grass for evil ends, but it actually takes a backseat to the tales of all your colorful customers.  As you progress and get to learn more of your customers’ quests, their motivations and agendas, and place in the overall tale, the story really gets fleshed out.

Even though you’re stuck in the shop crafting weapons, you can follow your customers’ travels via the ‘grindcast’, a communication system embedded in each weapon you forge.  It records their journeys and battles as they happen.  Think of it as medieval social media – communications will often appear like tweets, and you have a blog on each character where you can track their progress and your growing relationship with them. 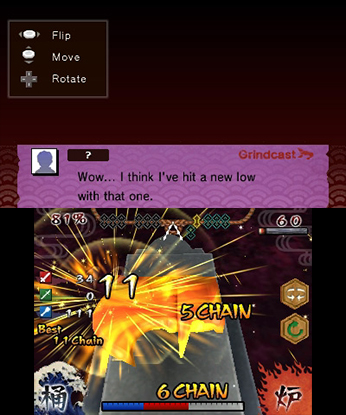 In terms of weapons creation the game controls well, adopting a simple ‘tap the touch screen to the serviceable beats’ approach.  You’ll have to rotate and flip the weapons, monitor the coal, polish everything up, and order materials, but it’s a pretty simple setup overall.  You’ll be doing it frequently as you build up the shop’s inventory, but each sequence is pretty short, with no real difficulty to speak of.  Challenge stems from matching up the right weapon to each customers needs, and making sure you have a broad enough selection on hand for when those orders start coming in quickly.

Comedy isn’t lacking in Weapon Shop – the early appearance of the audience laugh track clued me into that.  It would be spoilers to reveal much of it, but some of my favorite quotes are “My name’s NPC 1 and I’m here to play the stereotypical adventurer that are a dime a dozen now” and “Someone always restocks treasure chests”  Weapon Shop never takes itself too seriously, embracing its comedic roots without going over the top. 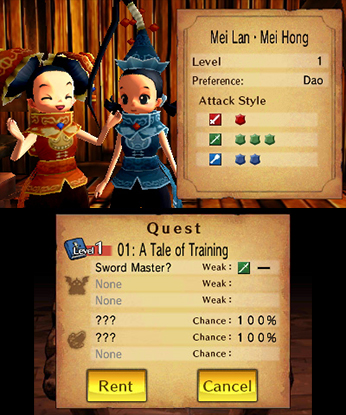 For all that I’ve enjoyed about this game though, I must admit that my early worries have been confirmed – it’s very repetitive.  While the variety of weapons is plentiful, the gameplay itself doesn’t really advance any, as it’s essentially the same tasks over and over.  Also, compared to some other Guild games like Liberation Maiden, The Starship Damrey, and Attack of the Friday Monsters, this is a longer game which can make the tasks seem even more repetitive.  I’d suggest playing this game in short bursts to get the most enjoyment out of it – playing for extended periods like I have for review purposes exposes the game’s repetition that much more.

Like most of Level 5’s Guild Series games, Weapon Shop de Omasse stands out not so much for its gameplay, but because of its unique ideas and interesting story and characters.  If those are aspects you value (and if you’ve enjoyed prior entries in the collection) this will be a download you’ll have a good time with.