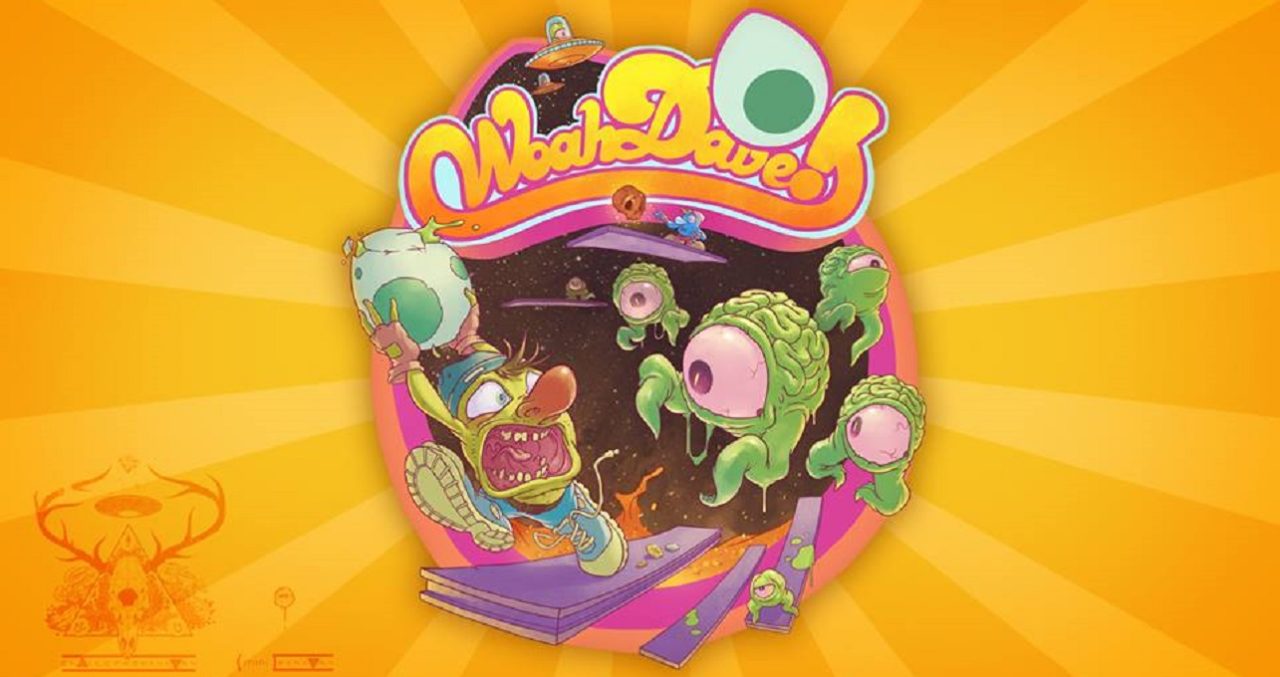 Woah Dave! was a small but satisfying 3DS release from day one. When a huge update fleshed out the game with new characters, stages, and more, it became even better.  It’s this “Deluxe” version that has recently launched on the Wii U.  Since a review for the 3DS version fell through the Pure Nintendo cracks, please consider this coverage for both versions.  And speaking of both, did you know there’s a cross-buy promotion?  Sweet!

A retro arcade feel permeates Woah Dave!  From the basic audio/visual package, to the single screen gameplay, and the high score focus, nearly everything about the title evokes simpler times.  But with an addictive and challenging design, there’s no shame in simple in this case.

As Dave (or others) you’re focused on collecting as many coins as possible, while avoiding threats from aliens and the transforming stages.  Things can get very hectic once the screen starts filling with all sorts of critters, platforms begin vanishing, and environmental obstacles become harder to avoid.  There’s a good risk/reward element though, as you’ll likely rake up more coins with higher amounts of aliens on screen.  They transform into faster, harder to hit forms, if left alone.  Is the increased challenge for precious coinage worth the risk?

If you want a top score(s), risks are almost a necessity.  Taking chances are well worth it though, and quite gratifying.  Although lacking online, Woah Dave! makes excellent use of local leaderboards where you can enter your initials in authentic arcade fashion.  This alone brings so much replay value, as you compete against both yourself and others.  Various achievements are another fun replayability incentive.

A brand new stimulus for replay added in the Wii U port is a two player mode.  It’s a welcomed addition, though I have to wonder why it was limited to only competitive with no co-op?  The 3DS version lacks this mode, but of course it has its own exclusive with cool stereoscopic 3D visuals.  The game seems a better fit on the handheld as well, but with cross-buy these points are fairly moot now.  Both are pretty much the same title, and both are quite fun.

Those looking for even more challenging fun will be pleased to know there’s an even tougher mode called “Bonkers”.  It’s an unloackable, and I can confirm it’s aptly named.  An entertaining test of skill now and again for sure, though I must say I’m glad it’s not the default mode.  Things are tough enough, especially when you bring in the newer stage elements such as lifts and warp portals.

I’ve been playing Woah Dave! on the 3DS for months now, and it’s always fun to come back to.  I’ve reasons to believe I’ll be saying the same thing about the Wii U version down the road.  If chasing high scores with a cast of quirky characters sounds like an enjoyable time to you, Woah Dave! is a good value purchase.  It’s a quality title, that’s addictive fun on both Nintendo systems.