Do you enjoy the classic board game RISK?  I mean do you really enjoy it? If so, you’re the target audience for Circle’s new 3DS eShop game, World Conqueror 3D, a game that’s very much in the RISK mold.  Unfortunately the proven gameplay has lost something in this handheld transition.

A strong word of warning … those who’ve never played RISK might quickly  find themselves lost and overwhelmed when playing World Conqueror.  It’s a sad reality that could’ve easily been avoided with a little more thought.  An introduction provides basic instructions, but it can’t even be accessed during the game if you need a reminder (and you most likely will need several).  The sparse electronic manual isn’t much better, lacking in detail which does little to alleviate confusion.  With no type of tutorial, this game quickly establishes that it has no interest in all but the most hardcore RISK fans. 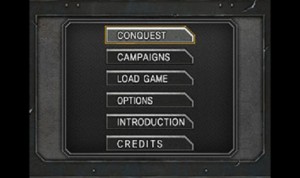 Now it’s true that not every video game is going to have broad appeal, and I’ve no problem with a stiff challenge now and then, especially as I’ve enjoyed RISK in the past.  In World Conquerors case though, this narrow approach is a disastrous choice, as multiple shortcomings make me  question the appeal this game will hold even for those who love the Parker Brothers’ classic. The question I kept asking myself while playing was: What does this video game offer that I can’t just get from the board game?  Not a lot if I’m being honest.  For everything it might offer, it loses just as much (if not more) in transition.

World Conqueror has a Conquest mode, where you pick a country and time period, or Campaigns, which has you choosing from a dozen historical battles.  Both have similar goals with you and your allies trying to spread across the map eliminating the enemies(s) but suffer from things such as awkward control, which has you juggling both traditional button with touchscreen input.  Further missions are sadly locked (likely in an attempt to lengthen the game experience) so struggling on one will prevent you from seeing all the title displays. 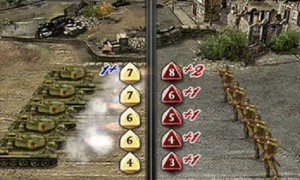 One of my biggest annoyances was how painfully slow the game was.  Now just so I’m clear, I realize RISK (and clones thereof) are slow by nature.  I’m not talking about the game’s length per se, but rather the unnecessary filler.  I strongly disliked the needlessly  long waits between turns, which resulted from meaningless actions.  Depending on what you happen to be playing, sometimes it’ll be a couple of minutes of waiting before you get a chance to play again, while all the computer foes and allies run through their routines, moving about the large map and showing battle animations.  It’s s-l-o-w enough to serve as a big detraction, but at the same time too fast for you to really get a grip on what’s going on.  The worst of both worlds, an option should have been included to skip these entirely and not just speed them up.

Visually this title is just okay.  Being based off a board game, that’s probably to be expected, and somewhat understandable.  There are some nice attack animations and black and white stills, but overall its fairly boring game to watch as you move across bland and somewhat cryptic maps.  The 3D effect, which features prominently in the title, doesn’t add much to the experience either.  Thankfully the audio fares better, with fitting tunes and sound effects to liven things up and draw your focus away from the plain graphics 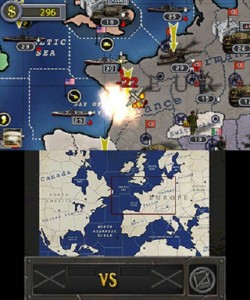 The final straw for me, and perhaps the games biggest missed opportunity, was the lack of any multiplayer!  This is a game that begs to be played against friends.  The CPU can’t even come close to the strategy and thrill that comes from playing against actual people.  This omission cemented my lower opinion of the game … and may cement its failure on the eShop.

I really tried to give World Conqueror the benefit of the doubt, and thought that perhaps (in spite of my honest observations) this was a title that just wasn’t for me.  But after sharing the game with my wife, sister, and a fellow PNM writer, I found the bulk of my feelings just being echoed.  While it gave me reassurance as a reviewer, it was nonetheless disappointing.

World Conqueror confirmed my worst fears.  It’s too confusing for those who have little experience with RISK, yet comes up well short for those who enjoy the board game it’s trying to emulate.  Part of the success of RISK stems from its balance of accessibility and depth.  World Conqueror has no such balance.  The steep learning curve, coupled with a strictly serviceable presentation, and shortcomings that aren’t present in the board game it models itself after (among other things), make me wonder how much of an audience this game will find on 3DS?  For those who think the game sounds appealing (and there will surely be some) will they have enough patience to stick with it?  And does the token 3D make this eShop version worth a download when mobile editions sell for a fraction of the cost?

Cirlce Entertainment has plenty of other good games that you can play on the 3DS, so show your support to them instead. Leave World Conqueror 3D to only the most patient of RISK fans, who hopefully will be more forgiving of its multiple shortcomings than I was.