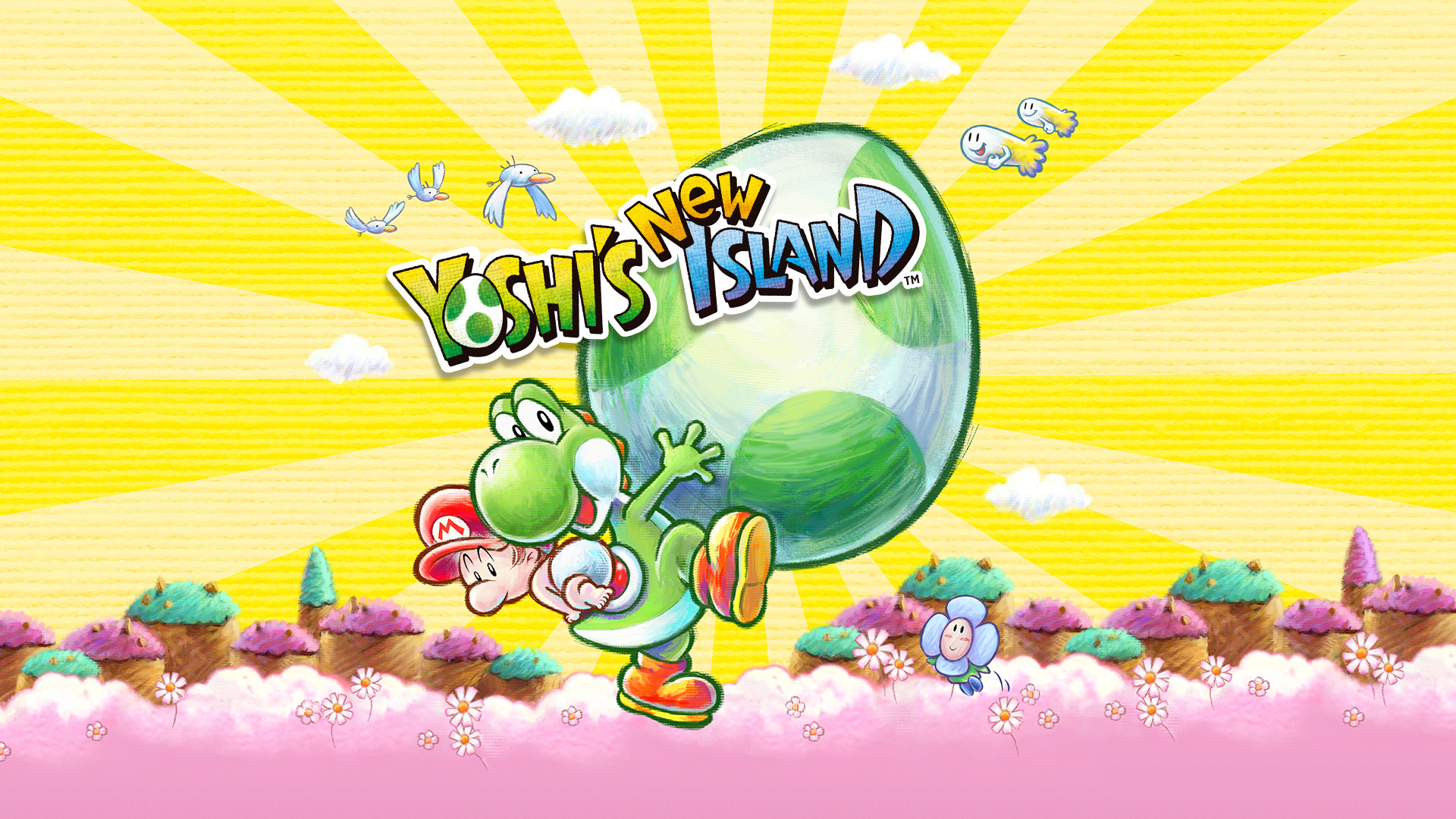 Since its début on the Super Nintendo in 1995, Yoshi’s Island has garnered a following of devoted fans that few games will ever be able to match. It’s colorful crayon-like art style was gorgeous, the sound track was a perfect blend of catchy and memorable, and the egg shooting mechanics brought much-needed spice to the platforming genre. Yoshi’s Island pushed the Super Nintendo to its limits, and has definitely earned its place as a timeless classic. Now, almost twenty years after its release, Yoshi’s New Island seeks to return to its famed roots in the third installment of the series. It’s time to pay another visit to the island of Yoshis to see what baby Mario and Luigi have been up to since their last adventure. 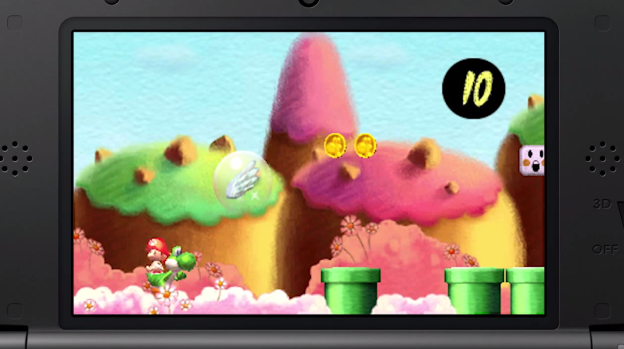 Taking place after the events of the first game, Yoshi’s New Island begins its tale with the journey of the stork in charge of delivering the young Mario Bros to their parents. Our overworked stork makes the mistake of delivering the babies to the wrong house, and in a panic, he desperately tries to find the rightful parents. Amid the confusion, the koopa wizard, Kamek, makes his move and nabs baby Luigi while accidentally knocking baby Mario out of the sky towards egg island, second home of the loveable Yoshis. Life isn’t always sunny side up on Egg Island, however, as baby Bowser has seen fit to take over the place in order to turn it into the ultimate summer vacation home. Unable to pinpoint his castle’s whereabouts, the Yoshis decide to once again help Mario find his brother via a relay system while they continue the search of the island for baby Bowser. It’s not the most creative story ever told, but when you play a Yoshi’s Island game, you do so for the game play and scenery. 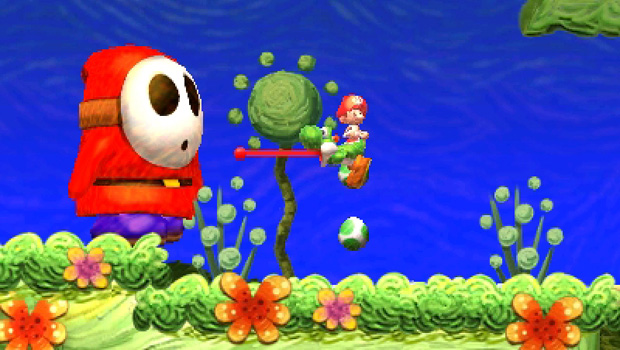 As the series is known for its luscious visuals and creative art style, Yoshi’s New Island adopts a gorgeous new look that feels like a painting come to life. The bright and cheerful colors are very inviting to the eyes, and the game makes excellent use of this new painting style, with objects like trees or grassy hills appearing to have paint globbed on and smeared around to give them texture similar to a Van Gogh painting. It really fleshes the island out and gives it plenty of variety, even with the 3D slider turned off.

While most of us may have forgotten the 3DS is capable of playing games in 3D, I would definitely recommend playing a few levels with the 3D on. Thanks to the games art style, objects in the background are slightly blurred so when the game is in 3D mode, your eyes aren’t straining to try to focus on sharp, crystal clear objects in both the foreground and background. The game also seems more forgiving with having to look at the 3DS directly head on to keep the 3D’s integrity intact. What all this means is that even if you have sensitive eyes like myself, you can still enjoy the beauty of the 3D in Yoshi’s New Island for longer than a couple of minutes. 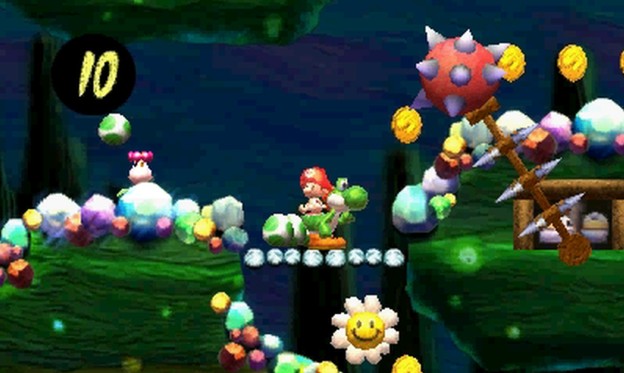 As you explore every nook and cranny of Egg Island, you’ll be treated to some great music while you take in the visuals. Taking the name Yoshi’s Island very literally, the game’s music definitely has an islander vibe to it. Similar to Yoshi’s Story for the Nintendo 64, the game has one central musical number that is constantly remixed with different styles depending on what world you are in. The choice of instruments fits the theme of the world you are in, and though it isn’t as memorable as the SNES classic, you will definitely find yourself humming the tunes in your head.

Even though great music and visuals are certainly nice, the Yoshi’s Island series is revered by its fans for its eggcellent game play. Going back to its roots, you won’t find the baby-switching mechanic that was present in the DS game. Yoshi’s New Island will have you flutter jumping and firing those tricky egg shots just like the good old days.  In fact, the game can feel a little too similar, as nearly every enemy from the original game makes a return. You’ll explore familiar areas like the jungle, and you’ll make use of the fire, ice, and seed spitting watermelons.  You may get a sense of déjà vu while playing the game, but it is important to note that the levels in the game are %100 new, and not a simple rehash. 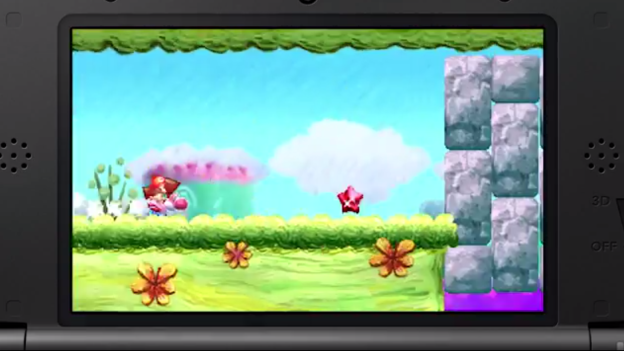 Just like in the original, your goal is to guide Yoshi and baby Mario to the finish line of a level while collecting thirty stars, twenty red coins, and five flowers to completely clear the level. While it’s certainly not required to get all the collectibles in a level, doing so on all levels of a world will unlock a special stage that will put your skills to the test. These stages are some of the most challenging in the game, and the rockin’ music and unique level design make them worth playing. As a new feature to the game, if you beat a level with all flowers collected, but you lack the red coins or stars, the game will only require you to collect all the stars and red coins on your next play through of the level to complete it. This makes getting %100 on a level much less frustrating than the original, which demanded you clear a level perfectly with all collectibles in one go. 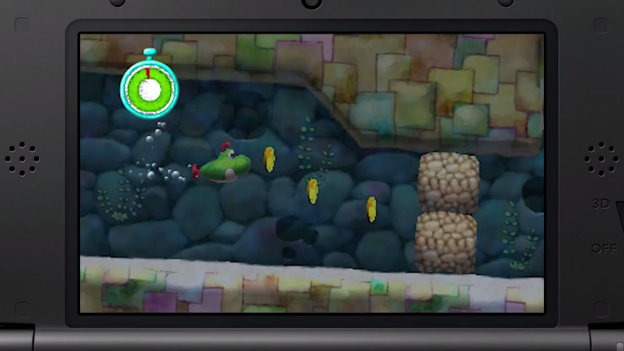 The mini game bonuses are now gone from Yoshi’s New Island, and replacing them is a special vehicle challenge level that unlocks by collecting thirty medals. Finding the hidden flowers in a level and then landing on one of them during the end of stage chance wheel earns you medals. The vehicle challenge stages serve no other purpose other than to let you collect lives, but they are a fun distraction never the less. Yoshi’s vehicle transformations aren’t absent from the main game play, however, and you’ll be able to control Yoshi in the form of a mine cart, hot-air balloon, jack hammer, bobsled, helicopter, and submarine. New to the vehicle transformations is the required use of the 3DS’ gyroscope controls. You simply tilt the 3DS left or right to guide your vehicle while pressing the A or B button to fire a weapon or hit the brakes. Each vehicle controls a little differently, and they mix up the game play within a level without being annoying or frustrating. 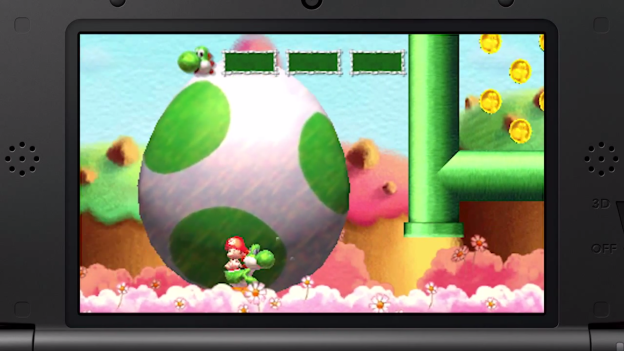 Sure, Yoshi has his flashy vehicle transformations, but the heart of the game play was and still is with the egg-shooting mechanic. Firing eggs works just the same as it did in the first game. Press X to bring up a cursor and line it up with your target as it moves before launching your shot. For those who consider themselves Yoshi’s Island purists, you are able to switch between two different button layouts along with the “patient” and “hasty” egg firing options, so you can customize the controls to fit your play style. There are two new types of eggs for you to throw this time around. Giant eggs, made by eating a giant shy guy, work the same way as a normal egg would. Aim your shot and watch your massive egg of doom bounce around and destroy warp pipes and boulders. Destroy enough objects, and you’ll be rewarded with extra lives. You’ll also get the chance to use giant metal eggs. After eating a huge metal shy guy, you can use your large egg to weigh you down so you explore underwater areas, or you can simply roll it across the ground to clear a path that would not be accessible otherwise. While these new eggs are a lot of fun to use, they tend to only be available in a small part of a level to help you get from point A to point B. It feels as if the game missed an opportunity for some creative level design, as you won’t be using the giant eggs as often as you may have liked. 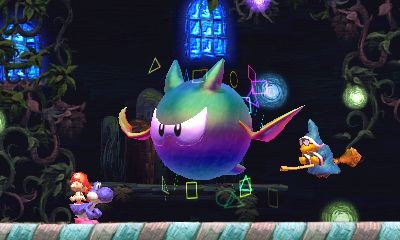 All in all, Yoshi’s New Island is a solid gaming experience. The levels can get challenging, and you’ll certainly have to play through them multiple times to get all the collectibles, adding to the games replay value. There is a multiplayer feature that allows you and a friend to play mini-games together, even if only one of you has a copy of the game. The graphics and music work well together, and truly make Egg Island a beautiful place to explore. The game does fall short at times due to its lack of new enemies or mechanics, but what is new to the game is fun and works well. Despite getting the feeling the game missed out on an opportunity to try more new things, you’re going to enjoy exploring all six worlds of Yoshi’s New Island with the tight controls and satisfying game play. The Yoshi clan’s latest adventure gets an 8/10 from PNM.