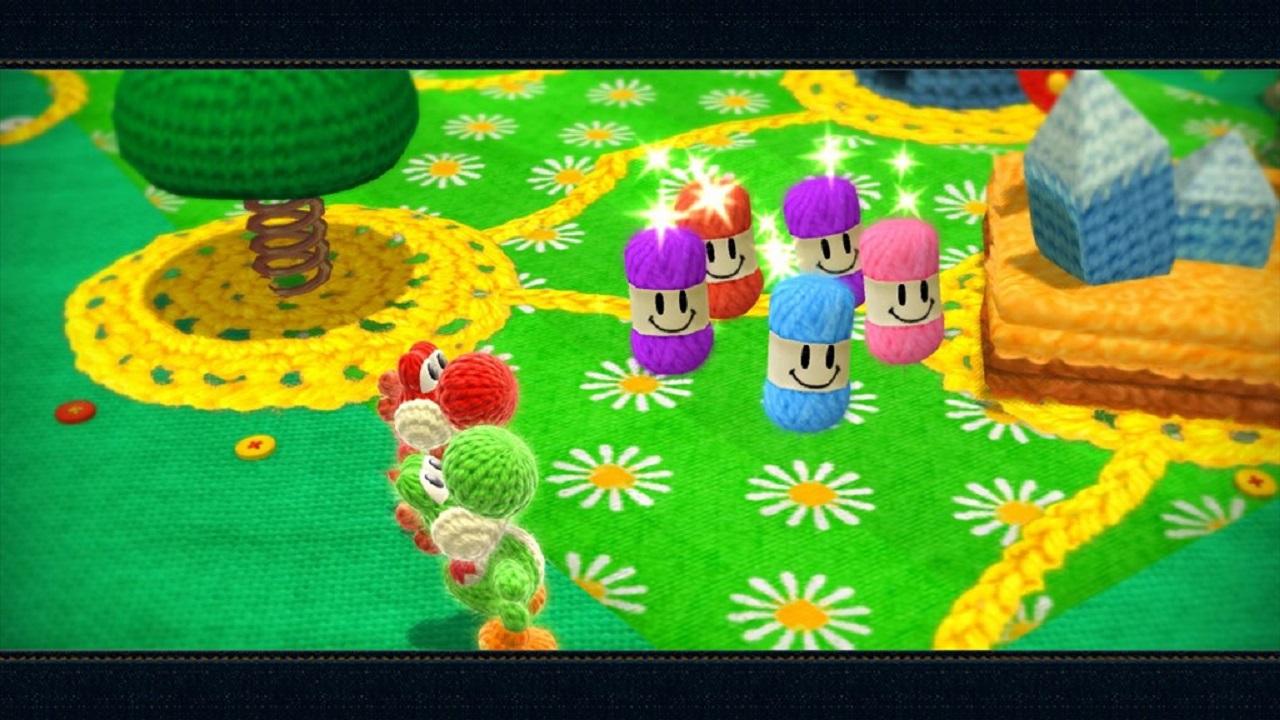 Collect, cooperate and get crafty with Yoshi! 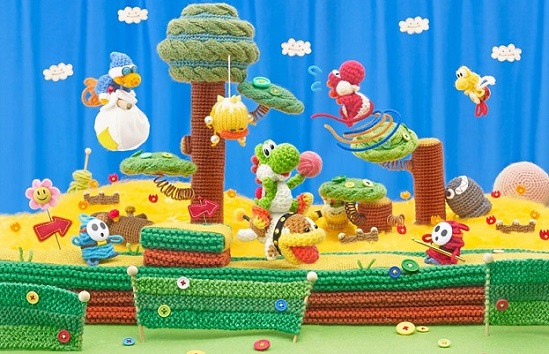 Get ready for some excitement …

I remember my excitement when Yoshi’s latest adventure was first announced nearly three years ago.  My anticipation has been growing steadily in the time since.  Even so, I’ve been extra careful to avoid excessive information on Yoshi’s Woolly World as of late.  No easy task for a game journalist, especially with a title that’s been out in the UK for months already.  But I wanted to be surprised – this is the first new Yoshi game for a home console in nearly twenty years. 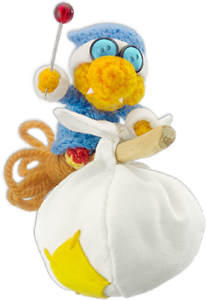 The story for this platforming adventure sees Craft Island being invaded by familiar trickster, Kamek.  With kidnapping on the brain once again, he captures a whole slew of the woolly Yoshis.  You’ll need to recover the Wonder Wool, spread across forty plus levels, to knit them all back together.  Is it a great plot?  Not especially.  But I must say that it really is quite refreshing to play a Yoshi game in which a wailing baby Mario isn’t hogging the spotlight.

Popular Yoshi moves like the flutter-jump and ground pound return for this adventure.  They can be pulled off with the Gamepad, Pro Controller, Classic Controller Pro, or Wiimote.  I appreciate the choices; you can even adjust the control styles.

It’s the use of the handicraft material that really alters the gameplay.  No longer flinging eggs, Yoshi  instead tosses balls of yarn. These can knot-up enemies, or knit new pathways.  Secrets in the levels – of which there are tons – can be found behind fabric, or by tugging on bows of thread.  The new design stands out most however through the wonderful visuals … 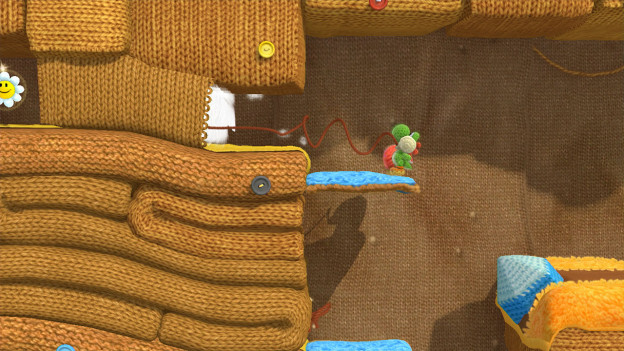 Yoshi titles are known for their unique and impressive graphics, a trend that happily continues with Woolly World.  The style was approached in the vein of Wii hit Kirby’s Epic Yarn, not surprising as that game’s developers, Good Feel, co-developed this new Yoshi adventure.  While fabric worlds aren’t new to Yoshi games (Yoshi’s Story had some) they’ve never been in dazzling high-definition before.  There is Off-TV play of course, the sole standout feature of the GamePad , but you’d be missing out not playing this on a large HDTV.  The game is positively adorable, and the charming, colorful atmosphere kept me grinning!  It has a crisp shine to it, with so many little details and touches in the foreground and background.  I often stopped just to admire all the eye candy, and with no time limit it’s easy to soak in the atmosphere. 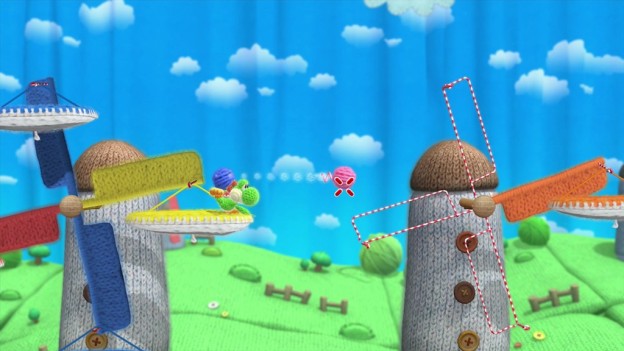 The visuals are positively fantastic!

The main game has six long worlds, plus some unlockable levels which ups the challenge.  Although I found the occasional level that packed in too many ideas for its own good, the vast majority are very well-designed, and diverse enough to easily hold the interest of almost anyone.  The mix of new and returning themes, foes, and mechanics work quite well in these varied fabric locales.  The fruit collecting bonus games after levels called to my mind Woolly World’s predecessor, Yoshi’s Story. 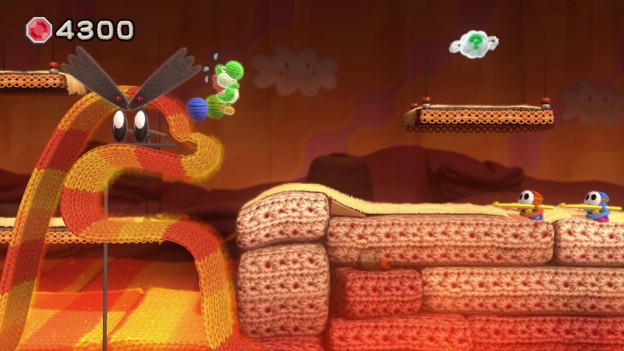 There’s a wealth of replay incentives, even after beating the game. In typical Yoshi fashion, an abundance of collectibles are waiting to be acquired.  Completionists will have a ball striving to achieve perfect course results!  Even if you aren’t that particular though, the Wonder Wool especially is something you won’t want to miss. Grabbing all five in each level frees captured Yoshis to play with. There are dozens of fun Yoshi patterns, and you can save your favorites to the Yarn Yoshi amiibo.  Sadly I wasn’t able to test it out, or the Double Yoshi feature which activates a second Yoshi sidekick that follows you.  The good news though, is the latter can be accomplished with any Yoshi amiibo.  Other amiibo unlock new patterns, bringing some extra value to the game. 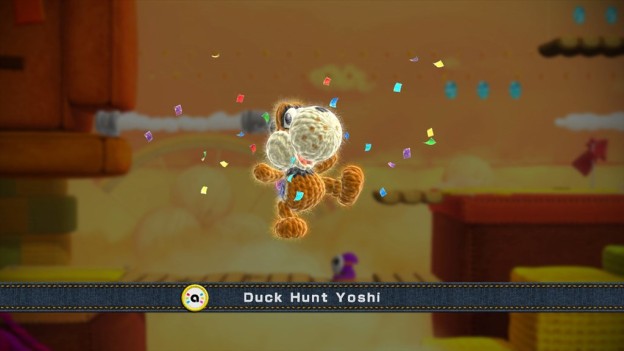 Are you an amiibo fan? Woolly World has you covered.

Probably the best thing to keep you playing is the two-player Co-op mode.  Nintendo nicely included multiple save files, so I was able to play a solo adventure under one, and team up with my wife in another; you can also change from solo to co-op between levels if desired.  The gameplay works similarly to the New Super Mario games in that failure puts you inside a bubble – in this case a winged egg – and you need to have your partner hatch you to return to action.  Occasionally the game placed us in an egg automatically when we were spread too far apart.  Unlike Mario titles, Yoshi’s Woolly World a slower paced experience, not one to be charged through, so cases like these were minimal.  Playing as a pair was great fun, adding a new layer of excitement! Co-op can also make things easier, useful for inexperienced gamers. 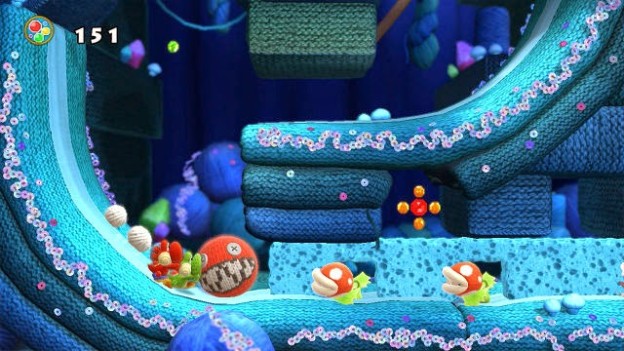 Besides the Co-op, there are other features included to make the challenge accessible for a wide range of skills.  Mellow Mode is one, an option that gives Yoshi wings.  If desired, you can swap between modes, even within a level.  It’s a neat idea for those who’d like to take advantage of it, yet skippable for those without interest. Optional helpful power badges also unlock, and can be bought with in-game currency.  Occasionally they’re available to try out for free.

While the difficulty certainly is on the gentler side, the game is only as easy as you choose to make it.  In any case, the collectibles are where the real challenge lies.  After all, who plays a Yoshi game just to ignore exploration?  The one area where I do feel I can express genuine regret about the difficulty concerns are boss encounters. They’re a little too straightforward (save the final boss) to leave much of a strong impression, though they still entertain despite their brevity and simplicity. 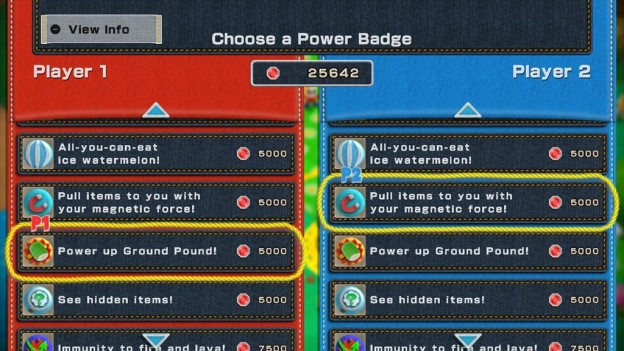 You decide how easy the game gets.

Another area where I wish a bit more thought was given is Yoshi’s transformations.  They’re definitely a mixed bag.  Some are quite enjoyable – the sheer scale of Mega Yoshi and the speediness of Moto Yoshi readily come to mind.  Others, like Mermaid and Mole Yoshi are pretty dull.  Frankly, the bigger problem with all of them is their infrequent use.  I wish Nintendo had focused on just a few of the stronger transformations so that we could’ve seen more of them, rather than the half-dozen that make just token appearances. 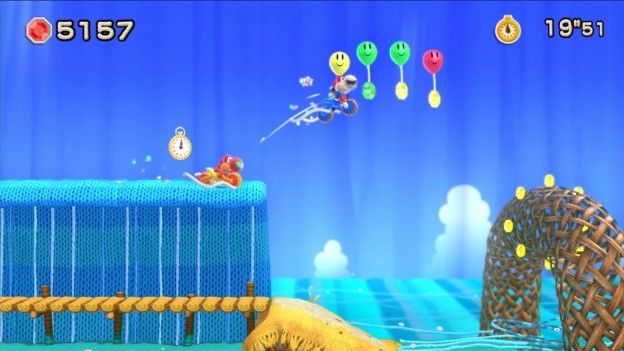 Moto Yoshi – a fun (but too limited) transformation.

I haven’t mentioned the music yet, but make no mistake, Woolly World has some high quality tunes.  There’s a refreshing amount of diversity in the tracks too, not simply remixes of the same song like some prior Yoshi games, and they seem to get better the further you progress.  In the central hub’s Scrapbook Theater, you can listen to all of the tracks.  I always appreciate the inclusion of a music player, especially when the tunes are this good!  Shy Guy’s dangling from the musical notes while each song plays is a nice little touch. 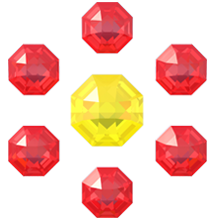 The Miiverse community for Yoshi’s Woolly World wasn’t active for press at the time this review published.  It will offer a couple nice features to enhance the game however once it’s released.  Yarn Mii characters may appear on the world map to interact with.  There’s also dozens of Miiverse stamps, which I look forward to using.

Yoshi’s Woolly World has so many positives.  It’s a content filled game, packed with fun from beginning to end.  It’s easy to lose yourself in for a spell, as time happily passes by.   In several ways, playing it makes me feel like a kid again.  Whether your desire is exploring for secrets alone, or going on a collectathon with a friend, you must make sure Yoshi’s Woolly World finds its way into your collection asap.  The wait was well worth it.  It’ is without a doubt one of the best Wii U games I’ve played yet! 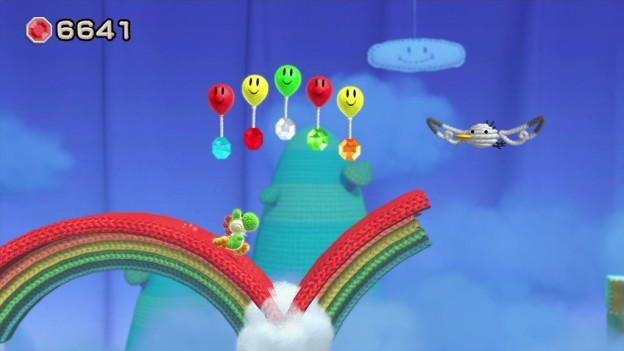 One of the Wii U’s finest games, no question about it!

Whether your desire is exploring for secrets alone, or going on a collectathon with a friend, you must make sure Yoshi’s Woolly World finds its way into your collection asap.