Phineas and Ferb: Quest for Cool Stuff is a platforming game based off the hit TV show, Phineas and Ferb on the Disney channel. Known for its clever writing, humor, and catchy musical numbers; the show revolves around two brothers, (Phineas and Ferb) who build amazing contraptions and explore areas all around the world in an attempt to fill their summer vacation with fun and adventure. While all this is going on, their older sister, Candace, attempts to catch her brothers in the act of building outlandish contraptions in order to get them in trouble with their parents.  Unbeknownst to any of the family, the brother’s pet platypus, Perry, always sneaks off because in reality, he is a secret agent tasked with stopping the nefarious deeds of Dr. Doofensmirtz, a clumsy evil genius who is bent on taking over the world.  As a result of one of Dr. Doofensmirtz’s evil contraptions, the evidence of the brother’s activities for the day is destroyed, Perry stops the evil doctor’s plans, and all is right with the world. It’s a simple formula, but it works really well for the show. 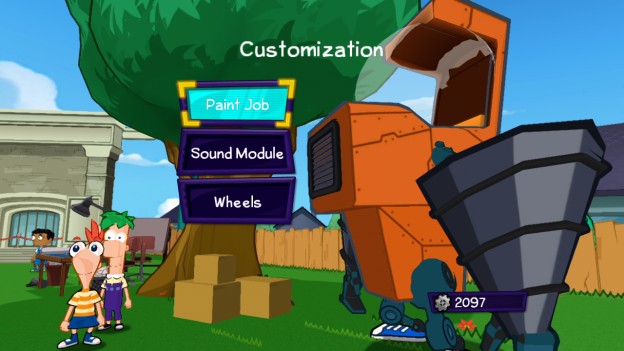 Although the target demographic for this game is young children, I was interested to see if the game could capture the quirks of the show that I found endearing. The story starts out very similar to the show; Phineas and Ferb are bored and decide to create a museum of cool things. To aid them in their search for cool artifacts, Phineas and Ferb build a mobile excavation drill to help them navigate the ruins where cool things are found. As the game progresses, you can use sprockets, (the game’s currency) to upgrade your drill with different paint jobs, wheels, and sound effects, which is a fun way to allow kids to customize their ride. The museum can also be upgraded, but the only purpose to this is for completing the game at %100, which is seems like wasted potential. It would have been interesting if the developers had given you the option of setting up your own museum displays. Instead, you simply view your collected items as a static image with a description to go with each item.

The art style of Phineas and Ferb is bright and colorful, and most of the characters are blocky and oddly shaped. While this art style may not impress everyone, the game does mimic the show’s look faithfully.  Most of the music in the game is pretty forgettable, but some musical tracks from the show have been used pretty effectively and you will definitely have their catchy tunes stuck in your head. All of your favorite characters are present within the game, and some will even assign you side quests that will allow you to unlock more parts for your drill. The best part of the game has to be the writing though. It definitely captures the humor of the show, and the game plays out just like an episode would on TV. The fact that they had the cast of the show do the voice-overs also adds to the fun. 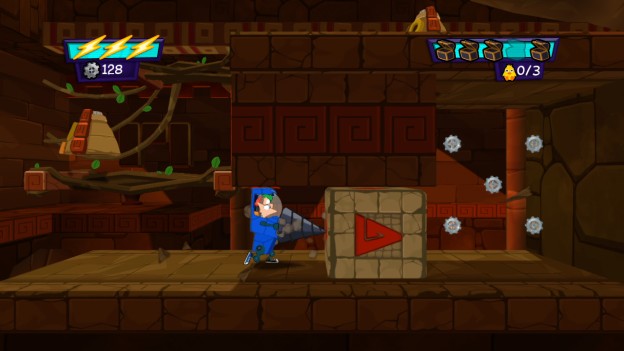 As mentioned earlier, the game is a simple platformer. The controls are simple, and players can run, jump, drill, and wall jump to navigate the ruins. Unfortunately, the game suffers from having odd jumping physics. The problem is when you go to make a jump from a running start, instead of keeping the momentum of your running as you jump, your character slows a bit in mid-air, shortening your jump and making it more difficult than necessary to clear gaps. The labyrinth like levels within the game are also fairly straight forward, but the game does require you to revisit levels once you’ve unlocked certain items so you can try out other paths. Thrown into the mix are a few underwater and low gravity levels in an attempt to mix things up.

Perhaps most disappointing was the lack of boss battles and enemy variety within the levels. During your adventure, you only encounter a handful of enemies, (maybe 3 unique enemy designs total) and all they do is patrol back and forth. The simple AI of the enemies adds no challenge to the game, and the lack of boss battles robs the game of some much-needed variety in gameplay. In order to rectify this, the game features levels where you play as Perry the platypus. While the change of scenery is nice, the gameplay and enemy AI remains the same, making the game feel monotonous. The game is also very short, as I was able to %100 the game in a little under three hours. Assuming a young child is playing this, it would be a safe guess that the game could last anywhere from six to eight hours. 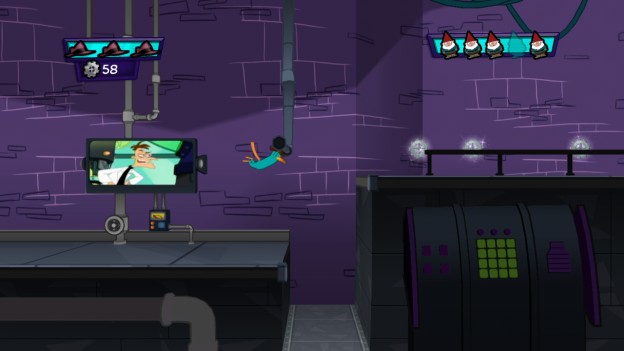 Phineas and Ferb is a show that teaches children the importance of creativity and seizing every opportunity to follow your dreams. While the game excels at mimicking the shows style and humor, the gameplay does not reflect the values the show tries to teach at all.  Although not necessarily a bad game, the lack of creativity and variety in the levels and enemies leaves you feeling slightly disappointed. This may be a game for children, but it feels as though the developers underestimated the gaming ability of most kids. If you enjoy the TV show, then most likely you can still find enjoyment with this game, but the spotty jumping physics, short game length, and monotonous gameplay ultimately outweigh the game’s faithful representation of the show. Pure Nintendo gives Phineas and Ferb: Quest for Cool Stuff a four out of ten.