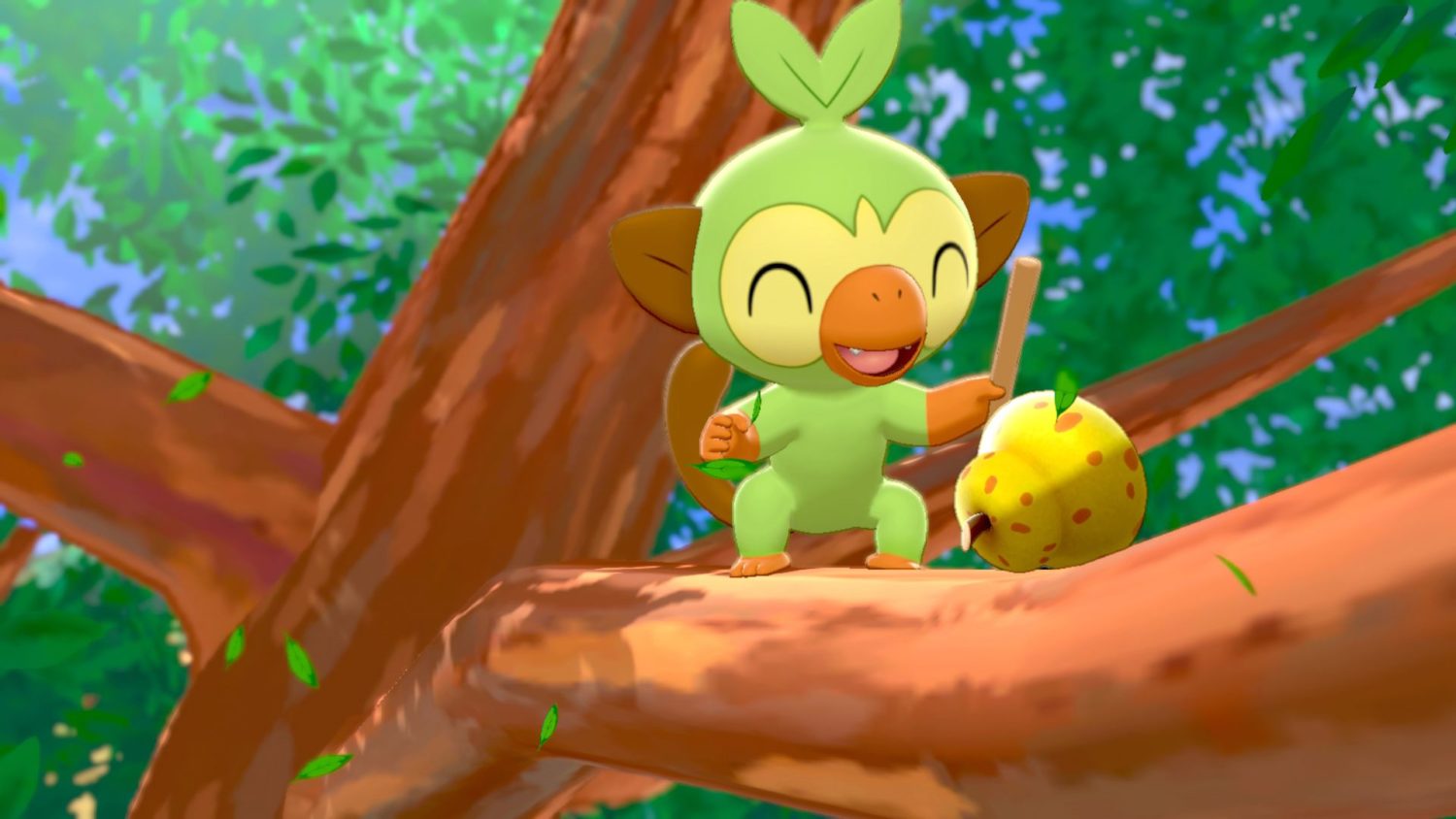 Nintendo has been keeping us happy lately with plenty of news and videos ahead of next week’s E3 conference in LA. The latest Nintendo Direct feature – a Pokémon Direct actually – came just yesterday, bringing with it a whole lot of new information on the next Pokémon games, Pokémon Sword and Pokémon Shield.

During the online presentation, we were given a closer look at the game’s setting, the Galar region, as well as the newly discovered Pokémon that reside within this land. Details have emerged of the mysterious Legendary Pokémon Zacian and Zamazenta. There are also several starter Pokémon, namely Grookey, Scorbunny, and Sobble.

The Pokémon Direct also revealed a release date for the pair of games. Pokémon Sword and Shield will hit the Nintendo Switch on November 15, 2019.

There was a lot more information to digest, so let’s get to it. This information is taken from Nintendo’s press release.

Dynamax is a phenomenon unique to specific locations in the Galar region, where Pokémon can take on gigantic appearances during battle, and it’s an integral part of Pokémon battles in the region. Pokémon from the Galar region are able to Dynamax, and when they do, they become tremendously strong and receive a boost to their power. Trainers can only Dynamax their Pokémon once during battle and the Dynamaxed Pokémon will return to its regular form after three turns. Only Trainers who possess a Dynamax Band can Dynamax their Pokémon.

All the moves of a Dynamax Pokémon will turn into special Max Moves. Max Moves are powerful, and some can even trigger additional effects. For example, the Normal-type Max Move, Max Strike, has the additional effect of lowering the Speed stat of an opponent it hits. The Max Moves the player’s Pokémon can use are determined by the kind and types of moves they knew before Dynamaxing.

Pokémon Gyms are found in stadiums throughout the Galar region and attract Trainers that are experts in specific types of Pokémon. To become Champion, players will need to defeat the top Trainer in each Pokémon Gym, also known as the Gym Leader. Spectators flock to the Gym Stadium to view these battles with Gym Leaders, which often involve intense clashes between Dynamax Pokémon. The matches are also broadcast on television throughout the Galar region. Milo is the Grass Gym Leader and is well liked by the Trainers of his Gym. His credo is to always enjoy battles and he specializes in endurance matches using Grass-type Pokémon.

Explore the Wild Area and Join a Max Raid Battle

The Wild Area is a vast expanse of land in the Galar region with untamed wilderness. It is full of nature and connects several different towns and cities. Trainers will find a greater variety of Pokémon living in the Wild Area than anywhere else in the Galar region. The Pokémon encountered in the Wild Area will change depending on factors like weather or location, so Trainers might see something new each time they visit. While in the Wild Area, players can control the camera to explore the vast areas around them and search for Pokémon and items.

People and Culture of the Galar Region

In Pokémon Sword and Pokémon Shield, players will be traveling through the Galar region, where they will find many unique locations, such as cities where Pokémon and people work and live together. Pokémon play an important role in the Galar region where many companies are eager to include Pokémon as part of their workforce. In Galarian culture, Pokémon battles are regarded as the most popular form of entertainment. Pokémon battles are held in stadiums, where challengers and Gym Leaders face off to the passionate cheers of fans and spectators. The Pokémon League is where Trainers gather to compete in Pokémon battles and hone their skills. Players will have to battle the Pokémon Gyms found around the region as they try to reach the pinnacle of the Pokémon League and earn the title of Champion.

As a resident of the Galar region, players will embark on an adventure to become the Champion and meet many people and Pokémon along the way.

The Legendary Pokémon Zacian and Zamazenta are shrouded in mystery and are unknown even to those who live in the Galar region. Zacian’s attacks are so graceful that its movements captivate opponents. Holding what appears to be a sword in its mouth, Zacian’s shining blade can cut through anything. With majestic movements and what appears to be a shield covering its body, Zamazenta can turn back any attack and overwhelm any opponents that dare face it.

Grookey, Scorbunny, and Sobble are three Pokémon that players can choose to be their first partner. Newly discovered details for these Pokémon include the following.

The stick that Grookey holds, originally from the forest where groups of Grookey live, is imbued with special powers after being exposed to the energy within Grookey’s body. Its green fur creates energy from sunlight. When Grookey drums with its stick near wilted flowers and leaves, they regain their color.

Scorbunny uses its powerful legs to confuse and disorient its opponents by running and jumping around them. Because the soles of its feet can become very hot, Scorbunny’s kick can burn and damage opponents, too. With a sac in its chest containing viscous fire energy, Scorbunny can increase its heart rate and body temperature by running around. This awakens the true power of its fire energy and greatly increases its physical abilities.

When Sobble touches water, its body changes its pattern and color, allowing it to blend into its surroundings. A rather timid Pokémon, Sobble will secrete the water within its body like sweat and disappear into its surroundings when nervous or embarrassed. With tears that are as potent as a hundred onions, Sobble will start to bawl if it feels threatened, spreading its tears around the area and causing everyone around it to start crying uncontrollably. Sobble will then use this distraction as a chance to escape.

Pokémon of the Galar Region

Many different species of Pokémon call the Galar region home. Much is unknown about the biology of these Pokémon, so researchers are working diligently to discover more information.

Gossifleur prefers land with clear water and air. Its pollen has a healing effect and is commonly used as a folk medicine remedy and made into a tea given to children in the Galar region when they are ill. Gossifleur travels over long distances by getting blown along by the wind. It controls the direction of its travels by twisting its body and petals.

When Gossifleur evolves into Eldegoss, its head becomes covered in thick cotton fluff. This cotton fluff serves as a cushion that helps to protect Eldegoss’s head from damage. The tiny seeds attached to the cotton fluff are said to be highly nutritious and beneficial to both people and Pokémon. Eldegoss spreads these seeds throughout the region, making the soil of the Galar region rich in nutrients.

The white fur that covers Wooloo’s body grows throughout its life and will fully grow back in three months even if it has been completely shorn. The fur is used for clothing, carpets, and other goods and is very popular as a specialty product of the Galar region. Wooloo live as a herd and mimic the actions of their Trainer or herd leader. They dislike conflict, and if they need to escape from enemies, they will simply roll away.

It is said that Corviknight is the strongest Pokémon living in the skies of the Galar region. It can often be seen fearlessly soaring through the air. Many say that any Pokémon foolish enough to challenge Corviknight are sent running with just a sharp glare and cry from this fearsome Pokémon. Because Corviknight possess superb flying skills and high intelligence, many of them work for the company called Galar Taxi and help transport people from town to town.

The jagged fangs of the Bite Pokémon Drednaw are strong and sharp enough to bite through rock and iron. Though it has a heavy shell, its well-developed muscles allow it to move quickly. Drednaw is known to be extremely aggressive, so it takes a skilled Trainer to tame and handle this Pokémon. It seems that some Trainers will release Drednaw back into the wild once they discover they can’t handle it.

Battles with wild Pokémon in tall grass or caves will occur when players run into Pokémon that they can see wandering around. Some Pokémon will pursue the player once they see them while others will run away. The “!” mark that will appear above tall grass also seems to be an indicator of wild Pokémon hiding there!

Each Pokémon has an Ability, which can have certain effects during battle, while out exploring, or both. In Pokémon Sword and Pokémon Shield, Gossifleur and Eldegoss can possess the new Cotton Down Ability. When a Pokémon with this Ability is hit by an attack, it will send out cotton fluff that will lower the Speed stat of other Pokémon.

Any Pokémon that Trainers find or catch during their adventures in Pokémon Sword and Pokémon Shield will have its information registered in the Pokédex. The Pokédex in these titles will actually be part of the player’s Rotom Phone. The Rotom Phone is also home to Rotom, a Pokémon that can enter various electrical appliances. A player’s Rotom Phone can do a lot more than serve as a Pokédex. For example, it can be attached to a bike to make it move faster on land or even travel over water once the bike is modified.

What do you think of the plethora of information revealed during the Pokémon Direct? Do you like the sound of the new pocket monsters of the Galar region? Let us know all your thoughts on the Pokémon Direct in the comments section.