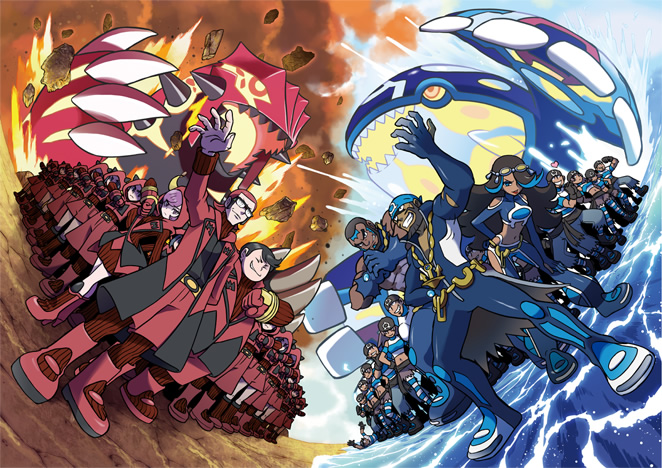 Updated with more artwork and screenshots:

BELLEVUE, WA – September 12, 2014 – The Pokémon Company International and Nintendo announced today that fan favoriteRayquaza, an incredibly powerful Pokémon, will join fellow Legendary Pokémon Groudon and Kyogre in the Pokémon Omega Ruby andPokémon Alpha Sapphire video games. This mysterious Dragon- and Flying-type Pokémon is said to descend to the planet¹s surface when Groudon and Kyogre clash. Adding to its legend, Rayquaza is somehow related to the mystery of Mega Evolution. Pokémon Omega Ruby and Pokémon Alpha Sapphire players will find out precisely how when the video games launch November 21, 2014, for the Nintendo 3DS family of systems. Fans can now watch Rayquaza in action, and other new scenes from the games, in a brand-new trailer at YouTube.com/Pokemon.

Primal Groudon gains the Desolate Land Ability, which changes the weather condition to extremely harsh sunlight. Opponents cannot change the weather condition during extremely harsh sunlight, meaning moves like Rain Dance, Sunny Day, Sandstorm, and Hail will fail, and Water-type attacks will fizzle out. Abilities like Drizzle, Drought, Sand Stream and Snow Warning will also fail to activate. Groudon can unleash a move unique to it alone, Precipice Blades, a powerful attack that can hit multiple opponents with an upward surge of sharp rocks.

Primal Kyogre¹s exclusive Ability is Primordial Sea, which changes the weather condition to an oppressive heavy rain. As with extremely harsh sunlight, opponents cannot change the weather condition during heavy rain. The Abilities Drizzle, Drought, Sand Stream, and Snow Warning will fail to activate, and Fire-type attacks become ineffective as well. Kyogre has its own move that only it can use, Origin Pulse, an attack that can slam multiple opponents with water massed into ballistic orbs.

Team Magma and Team Aqua battle with Mega-Evolved Pokémon
Team Magma is led by Maxie, who leads the team¹s mission in seeking a world ideal for humanity. The organization wishes to increase the landmass on the planet, adding to it so humanity can labor to achieve greater evolution and development. Team Magma thinks laboring for the equal coexistence of humanity and Pokémon is foolish and only holds back humanity¹s progress.

During the team¹s mission, Maxie battles with the Fire- and Ground-type Pokémon Camerupt, which can Mega Evolve into Mega Camerupt. Maxie wears a pair of Mega Glasses, set with a mysterious Key Stone needed to Mega Evolve his Pokémon. Players can battle with Camerupt, too, and when it Mega Evolves, its Ability changes to Sheer Force, which raises the power of all attacking moves that have an additional effect. But beware‹the additional effects are ignored. Most of Mega Camerupt¹s base stats are uniformly raised, but its Speed drops. It¹s best to think of strategies where Mega Camerupt can be used as the second act in battle.

Team Aqua is led by Archie, who leads the team¹s mission in increasing the size of the oceans in an effort to bring back the rich habitats lost to Pokémon due to humanity¹s greed. Team Aqua believes the ocean is the font of all life, and by restoring it, its members think that they can re-create an ideal home for Pokémon.

During the team¹s mission, Archie battles with the Water- and Dark-type Pokémon Sharpedo, which can Mega Evolve into Mega Sharpedo. Archie wears the Mega Anchor, set with a mysterious Key Stone needed to Mega Evolve his Pokémon. Players can battle with Sharpedo, too, and when it Mega Evolves, all of its stats show a boost, and its already high Attack is enhanced. Mega Sharpedo also gains the Strong Jaw Ability, which raises the power of bite attacks like Crunch.

A young Trainer named Wally and his Mega Gallade
When players begin their adventure, they will meet a timid young Trainer named Wally, who hails from Petalburg City. He hopes to be a strong Trainer despite being meek and shy. Tiny Ralts is the first Pokémon that Wally catches, and after it evolves into Kirlia and then Gallade, it can Mega Evolve into Mega Gallade. Players can encounter Ralts, too, and when they evolve it to Kirlia and use aDawn Stone on a male Kirlia, it will evolve into Gallade. When Mega Evolved, Mega Gallade¹s Ability changes to Inner Focus, which prevents it from flinching during battle. Its Attack and Speed stats also improve, making Mega Gallade an effective first-strike Pokémon.

The Pokémon Omega Ruby and Pokémon Alpha Sapphire Special Demo Version features gameplay that players won¹t experience anywhere else. During the course of this early adventure, players are likely to encounter a familiar Pokémon that can now Mega Evolve. What¹s more, one of these Mega-Evolved Pokémon can be brought into the full Pokémon Omega Ruby and Pokémon Alpha Sapphire games. Reward items obtained during the Special Demo Version adventure can also be brought into the full game which is sold separately. Details about how to bring Pokémon and items into the full game will be announced soon.

The Pokémon Omega Ruby and Pokémon Alpha Sapphire games will be compatible with Pokémon Bank and supported by the Pokémon Global Link from the day of release.

Pokémon Bank is a paid service with an annual charge for usage.