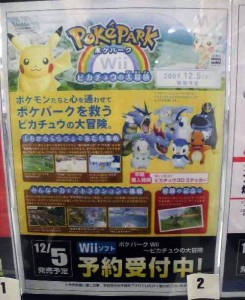 The setting of the game is a PokePark. One day, the mysterious Pokemon Mew comes and tells Pikachu of a crisis taking place so it sets out on an adventure to find out what’s going on. It discovers the park, which encompasses various areas such as the forest and sea. Pikachu makes friends with other Pokemon and can use their abilities to clear various attractions in the PokePark. Pikachu is able to use Thunderbolt in battle, but some problems will be too hard for it to handle, so you can call for the Pokemon you have befriended to help you and use their abilities instead. You can get friends through various mini-games as well, such as by chasing after the Pokemon in races (perhaps tag) or by solving quiz questions correctly. One of the park’s main attractions will involve Pikachu and your partner Pokemon racing against the clock to beat certain goals, using the Wii remote by waving it around. (Two other attractions, the Marine Slide and Sky Race, were already revealed in the previous news story.) The game will also allow you to take screenshots of your adventures and save them to an SD card.