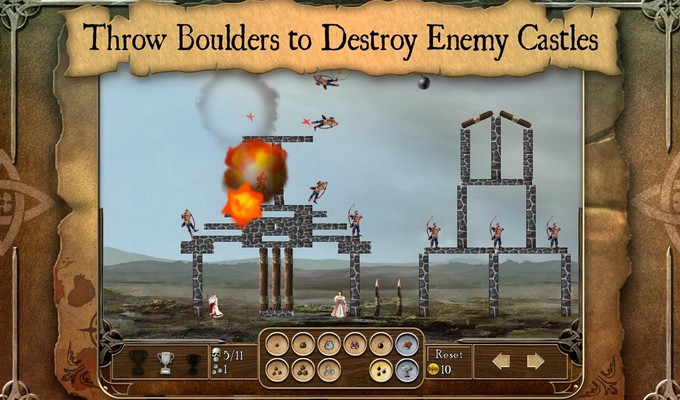 Crush and destroy enemies with your powerful trebuchet in this vivid 3D edition of the popular Castle Clout game! Only you can unite the empire and save the kingdom from the Darkness as warring factions build strongholds across the Forest, Frost, Desert, Jungle and Burning Lands. Boulders, bombs and more blaze through the air to batter walls and topple foes while immersive 3D and stunning painted backgrounds plunge you into the action! The exciting physics-based play is similar to popular slingshot games but takes clever strategy to master. Choose your weapon and ammo, and release at the right angle to maximize the damage you inflict. Conquer over 150 levels, and expand your battle for the kingdom with the “hot seat” multiplayer mode! Take turns shooting missiles to score damage points, topple your opponent’s king and queen, and destroy your opponent’s castle before you run out of ammo! Will you emerge the victor in this medieval battle royal?

• Conquer kingdoms on 5 continents: Battle for control of the Forest, Frost, Desert, Jungle and Burning Lands, each peopled with unique foes. 16 stunning, painted backgrounds bring the empire to life!
• Battle through over 150 levels: Earn Gold, Silver and Bronze trophies for each level you complete.
• Easy-to-use controls keep the game moving—just aim, set and release!
• Choose from 16 special ammo types. Enemies scream as you hit them with stones, bombs, plagues and more.
• Build custom levels: Use wood, stone and metal to build elaborate fortifications, each with different properties. Then fill them with a variety of colorful foes to create your perfect level.
PLUS:
• Choose from a trebuchet or ballista
• Entertaining, hilarious sound effects
• Lush visuals and a rousing score
• 30 different enemies and allies
• 20+ detailed backgrounds

Choose between the ballista and trebuchet, load it with ammo and release at the right angle to send boulders, bombs and more blazing through the air in front of immersive 3D painted backgrounds. Batter walls and topple foes while avoiding allies and earn Gold, Silver and Bronze trophies for each level. Then use the builder to create custom levels out of wood, stone and metal, filled with a variety of colorful foes. Or challenge friends and family in multiplayer mode and see who emerges the victor in a medieval battle royal.