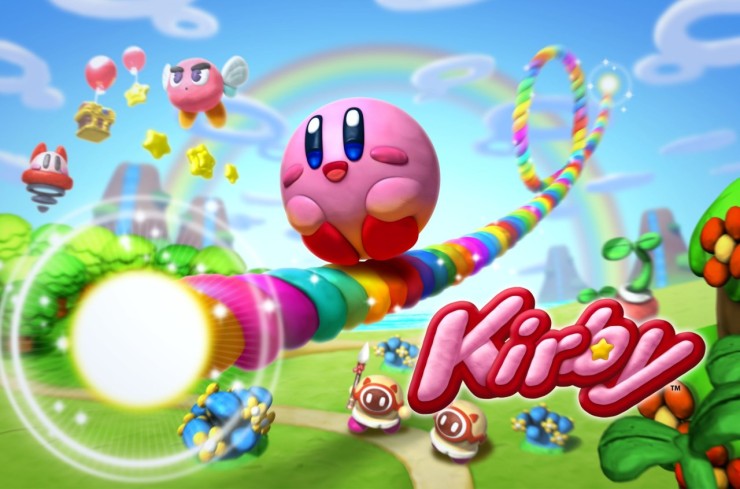 PR: Experience Kirby’s Most Clay-Ful Adventure Yet in Kirby and the Rainbow Curse

REDMOND, Wash.–(BUSINESS WIRE)– From having Kirby ride on hamsters to turning him into yarn, Kirby games have always experimented with inventive visual styles and unique game play. Launching for the Wii U console on Feb. 20, the visually striking new adventure Kirby and the Rainbow Cursefinds players controlling Kirby exclusively using the touch screen on the Wii U GamePad controller in a world made of clay. By drawing lines on the touch screen with the stylus, the player creates Rainbow Ropes that will help Kirby navigate obstacles and defeat enemies. Three friends can hop in and out at any time using Wii Remote controllers to play as Waddle Dees and assist Kirby, and players can even use compatible amiibo figures once a day, per stage, to power up Kirby with special abilities.

“Kirby and the Rainbow Curse kicks off another absolutely stellar lineup of Wii U games for this year,” said Scott Moffitt, Nintendo of America’s executive vice president of Sales & Marketing. “In the first half of the year alone, Wii U owners will be able to adventure with Kirby, party down with Mario and his friends in Mario Party 10, build levels in the Nintendo eShop-exclusive Mario vs. Donkey Kong: Tipping Stars and experience Nintendo’s newest IP with the action-packed Splatoon.”

Unlike other games in the Kirby series, Kirby and the Rainbow Curse is set in a beautiful “clay-ful” world. The controls are also easy to pick up for all types of players, since the game is played exclusively on the touch screen of the Wii U GamePad. The Rainbow Ropes will guide Kirby in the direction players want him to go, and drawing ropes in creative ways like a loop will even give Kirby a quick speed boost. Strategy not only comes into play in guiding Kirby, but also in the amount of Rainbow Ink used, as drawing Rainbow Ropes uses precious ink. By staying on the ground or collecting an ink bottle, players can refill the Rainbow Ink quickly. In addition to moving Kirby around, Rainbow Ropes can be cleverly used to solve environmental puzzles. Using a well-drawn rope can block a waterfall or uncover hidden areas.

Instead of his traditional copy abilities, Kirby can transform into powerful vehicles. As a tank, Kirby will move automatically and players must tap on the GamePad touch screen to shoot at approaching enemies. When traveling through the depths as a submarine, Kirby will move to the spot players tap on the touch screen. And as a rocket, drawing Rainbow Ropes will help navigate him to the goal.

Anyone that wants to experience Kirby and the Rainbow Curse with friends or family members is in luck! Up to three additional players can join the adventure at any time. As the player who controls Kirby draws Rainbow Ropes and taps the GamePad, other players use Wii Remote controllers (sold separately) to play as friendly Waddle Dee characters to assist Kirby and help discover the game’s numerous collectibles. While ultimately everyone works together to reach the goal, each player’s collected stars will display at the end of each stage, encouraging a little friendly competition.

Kirby, King Dedede or Meta Knight amiibo can each be used once a day to power up Kirby with special abilities. By tapping a Kirby amiibo to the Wii U GamePad, players receive an unlimited Star Dash within a stage, which usually can only be activated by collecting 100 stars. A King Dedede amiibo outfits Kirby with a hat that grants him six health bars instead of the normal four. And the Meta Knight amiibo gives Kirby a mask that lets him use a fast dash that blasts right through weaker enemies.

Kirby and the Rainbow Curse launches for Wii U on Feb. 20 at a suggested retail price of $39.99. The game will also be available for purchase in the Nintendo eShop and at Nintendo.com.

For more information about Kirby and the Rainbow Curse, visit http://kirby.nintendo.com/rainbow-curse/.