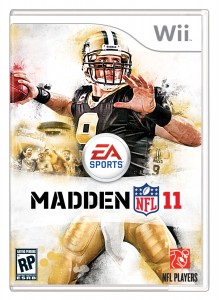 REDWOOD CITY, Calif., – April 22, 2010 – Electronic Arts Inc. (NASDAQ: ERTS) announced today that New Orleans Saints quarterback Drew Brees has been chosen by fans to be featured on the cover of Madden NFL 11, set to hit retail shelves on Tuesday, August 10. The Madden NFL 11 cover announcement is the result of a first-ever online consumer vote, powered by the Doritos “Change the Game” program, which empowered fans to select the highly-debated cover athlete.  The partnership between EA SPORTS™ and the Doritos brand represents the first in a series of initiatives this year which allow fans to help shape the future of the franchise.

“The Madden NFL franchise holds a special place in popular culture and the cover is a coveted position for players all over the league,” said New Orleans Saints quarterback Drew Brees. “I’m honored to be the first cover athlete chosen by Madden NFL fans and it’s a great way to cap off an amazing year for the Saints and the city of New Orleans.”

From February 4 – March 15, fans logged on to www.doritoschangethegame.com to vote daily for one of the three nominees. Voters were also entered into a drawing for a chance to win a trip to the 2010 NFL Draft. During the voting period, former NFL all-stars and Madden NFL cover legends Eddie George, Marshall Faulk and Shaun Alexander were featured on limited-edition Nacho Cheese and Cool Ranch Doritos bags to inspire fans to vote for the next Madden NFL cover athlete.

“Drew’s exceptional performance during the regular season and in Super Bowl XLIV resonated with voters and helped cement his position as the fans’ choice to grace the cover of Madden NFL 11,” said Todd Sitrin, Group Vice President, EA SPORTS Global Marketing. “Giving fans the power to select this year’s Madden NFL cover underscores our commitment to connecting with our fans and giving them opportunities to influence the game.”

“Doritos is always looking for unprecedented opportunities to provide our fans access to the things they are most passionate about, and we are thrilled we were able to partner with EA SPORTS to give consumers complete control over this highly anticipated gaming moment,” said Rudy Wilson, vice president, marketing, Frito Lay.

Drew Brees was named Super Bowl XLIV MVP after leading the New Orleans Saints to their first ever Super Bowl title. Following a career threatening injury during his last season with the San Diego Chargers, Brees joined the New Orleans Saints in 2005, less than a year after Hurricane Katrina. Since then, Brees has helped rebuild the city and the football team, through his successes on the field and contributions to the community off the field.

Brees’s decorated NFL career has included four Pro Bowl selections, three All Pro selections, three NFC Offensive Player of the Year awards, the Associated Press 2008 NFL Offensive Player of the Year and the Pro Football Weekly 2004 Comeback Player of the Year. Off the field, Brees has been a champion as well through his charity – the Brees Dream Foundation – and his work in the New Orleans, San Diego and West Lafayette/Purdue, Ind. communities, which have provided over $4,500,000 to charitable causes and academic institutions.

Beyond the cover athlete selection, the franchise has also recently introduced two new initiatives that further enable fans to influence Madden NFL 11. From March 31 – April 26, fans have had the ability to vote on three match-ups through the Madden NFL website and determine which teams would be featured in the Madden NFL 11 game demo: a Super Bowl rematch, or a replay of one of the Conference Championship games. During the 2010 NFL Draft, fans will have the opportunity to influence rookie player ratings in Madden NFL 11 via online votes on the Madden NFL website.
Madden NFL 11 will redefine videogame football for both veteran and rookie players by providing a Simpler, Quicker and Deeper experience:
·         Simpler: Call plays like an NFL coach with ease using an all-new play-calling system, GameFlow, which executes an authentic, situational game plan for you.
·         Quicker: The new play-calling system will enable players to spend more time on the field and less in the playbook – completing games in half of the time.
·         Deeper: Madden NFL 11 is feature-rich, with improved animations and control options, enhanced online functionality, and new broadcast and audio presentation that delivers the NFL experience fans have come to expect.