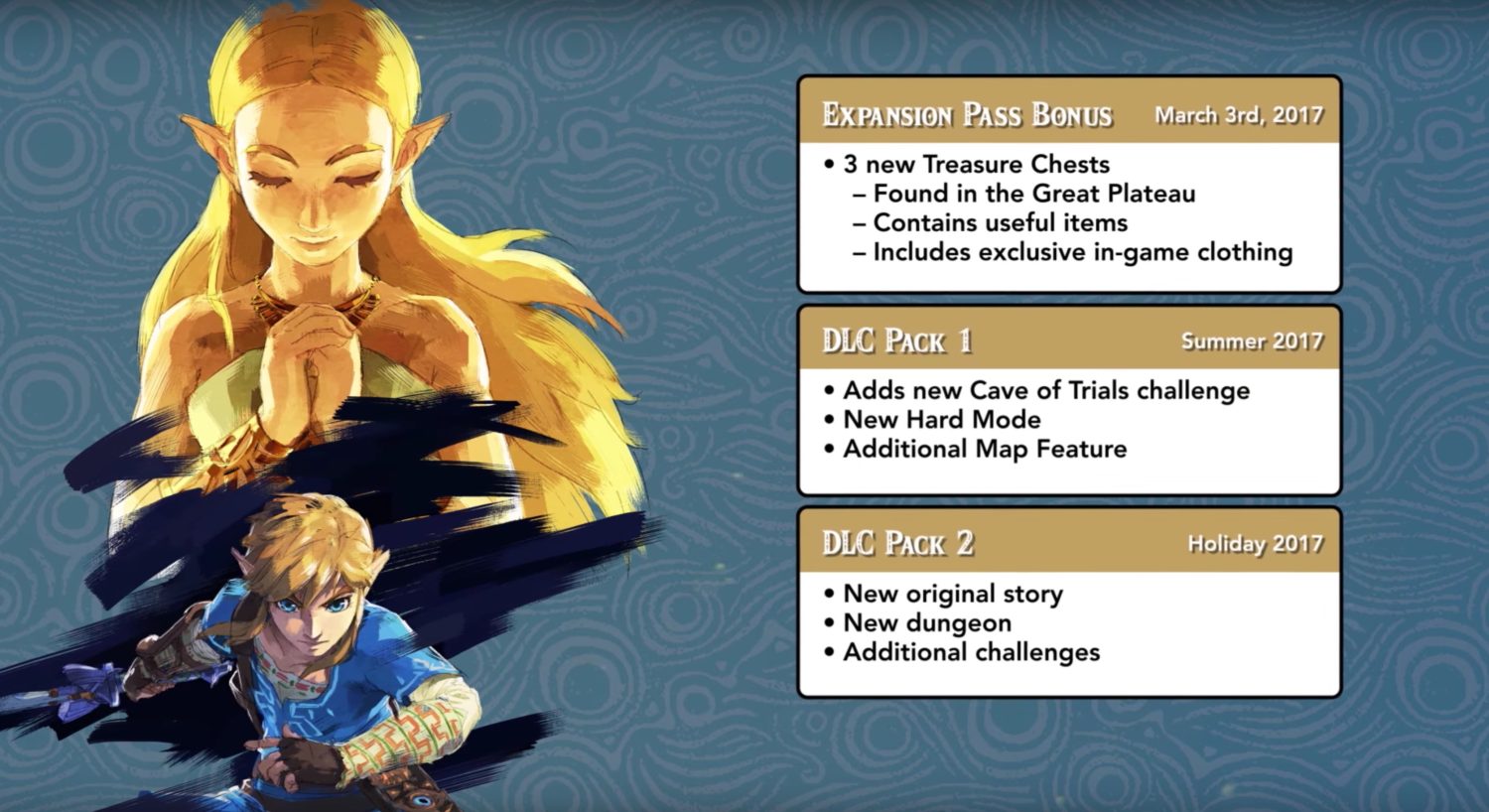 PR: Nintendo Prepares Downloadable Content for The Legend of Zelda: Breath of the Wild

PR: Nintendo Prepares Downloadable Content for The Legend of Zelda: Breath of the Wild

REDMOND, Wash.–(BUSINESS WIRE)– The Legend of Zelda: Breath of the Wild for the Nintendo Switch and Wii U consoles is one of the largest, most engaging video games Nintendo has ever created. While the main game offers players an engrossing quest that will keep them entertained for hours, as well as the freedom to explore the vast Hyrule at their own pace, the game world provides a rich canvas that offers the opportunity for additional adventures. As a result, the first-ever downloadable content for the main-line Legend of Zelda series is in development.

Starting when the game launches on March 3, players will be able to purchase an Expansion Pass for $19.99, granting access to two new sets of downloadable content for the game when they become available later this year. Immediately upon pre-purchase or purchase of the Expansion Pass, three new treasure chests will appear in the game’s Great Plateau area. One of these treasure chests will contain a shirt with a Nintendo Switch logo that Link can wear during his adventure, exclusive to the Expansion Pass. The other two will deliver useful items. The first content pack is scheduled to launch this summer, and will include the addition of a Cave of Trials challenge, a new hard mode and a new feature for the in-game map. The second content pack will launch in Holiday 2017, and adds new challenges that will let players enjoy a new dungeon and a new original story. The Expansion Pass will be available for both the Nintendo Switch and Wii U versions of the game and are identical. Content packs cannot be purchased individually.

“The world of Hyrule, which we created for The Legend of Zelda: Breath of the Wild, is so large and vibrant that we wanted to offer more for players to experience within it,” said Nintendo developer Eiji Aonuma, the longtime producer of the series. “With this new Expansion Pass, we hope that fans will play, explore and enjoy the game even more.”

Aonuma also created a brief video to share more details about the Expansion Pass. It can be viewed at http://zelda.com/breath-of-the-wild/expansion-pass/.

For more information about The Legend of Zelda: Breath of the Wild, visit http://www.zelda.com/breath-of-the-wild.

Remember that Nintendo Switch features parental controls that let adults manage the content their children can access. For more information about this and other features, visit http://www.nintendo.com/switch.

About Nintendo: The worldwide pioneer in the creation of interactive entertainment, Nintendo Co., Ltd., of Kyoto, Japan, manufactures and markets hardware and software for its Wii U™ and Wii™ home consoles, and Nintendo 3DS™ and Nintendo DS™ families of portable systems. Since 1983, when it launched the Nintendo Entertainment System™, Nintendo has sold more than 4.4 billion video games and more than 696 million hardware units globally, including the current-generation Wii U, Nintendo 3DS and Nintendo 3DS XL, as well as the Game Boy™, Game Boy Advance, Nintendo DS, Nintendo DSi™ and Nintendo DSi XL™, Super NES™, Nintendo 64™, Nintendo GameCube™ and Wii systems. It has also created industry icons that have become well-known, household names such as Mario™, Donkey Kong™, Metroid™, Zelda™ and Pokémon™. A wholly owned subsidiary, Nintendo of America Inc., based in Redmond, Wash., serves as headquarters for Nintendo’s operations in the Western Hemisphere. For more information about Nintendo, please visit the company’s website at http://www.nintendo.com.