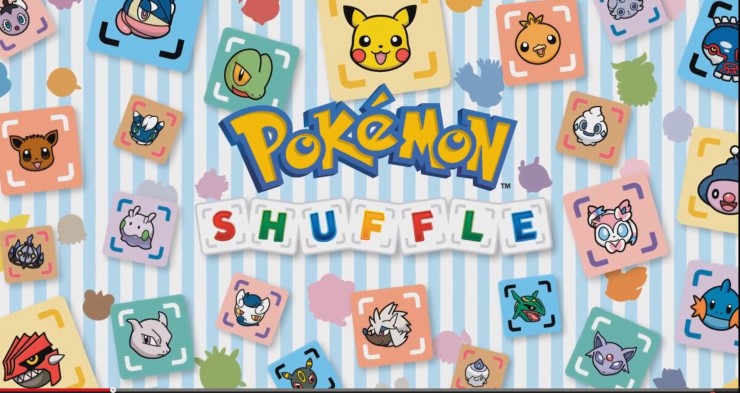 BELLEVUE, WA—January 14, 2015—The Pokémon Company International and Nintendo have announced Pokémon Shuffle, a new game for the Nintendo 3DS family of systems that can be downloaded by players from Nintendo eShop at no cost.

In Pokémon Shuffle, players will put their puzzle-solving skills to the test as they battle wild Pokémon across a variety of stages. Match three or more Pokémon in the Puzzle Area to deal damage. The aim of the game is to reduce the wild Pokémon’s HP to zero within the number of moves available.

Clearing Pokémon efficiently is the key to success, and players will be able to take advantage of their own Pokémon’s type during gameplay. What’s more, players will also be able to raise the level of their Pokémon as they play, enabling them to deal even more damage. Some Pokémon can even Mega Evolve, just like those in Pokémon Omega Ruby and Pokémon Alpha Sapphire. Mega-Evolved Pokémon are able to remove many wild Pokémon from the Puzzle Area at a time.

Pokémon Shuffle players start the game with five Hearts, and one is used for each stage played. When players run out of Hearts, they will wait for their Hearts to replenish in order to play again. Optionally, players will be able to keep playing immediately by using items earned in-game through regular gameplay or purchased at Nintendo eShop.

The Pokémon Company International also revealed Hoopa, a newly discovered Pokémon found in the Pokémon Omega Ruby and Pokémon Alpha Sapphire video games. Hoopa is a rare Mythical Pokémon that cannot be found during normal gameplay. Categorized as a Mischief Pokémon, Hoopa is a Psychic- and Ghost-type Pokémon, recognizable by the golden rings that adorn its horns and body, which are said to have the power to bend dimensions and move objects across great distances.