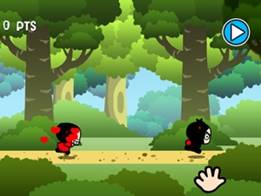 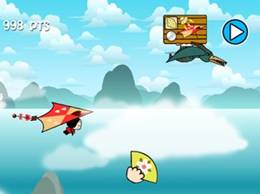 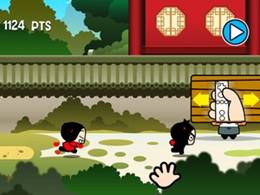 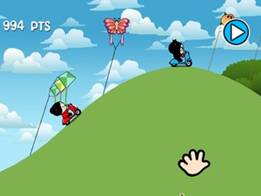 Get ready for a breathtaking Run and Jump game starring the adorable cartoon icon, and seduce your sweetheart with the perfect Valentine’s gift.

Lesquin, France, February 14th, 2011 – Bigben Interactive, a leading European distributor and publisher, and Vooz are celebrating Valentine’s Day with the news that Pucca’s Kisses Game is available today for download from WiiWare™ for 500 Nintendo Points™. Pause time using the Wii Remote™, then restart the action to leap obstacles and defeat enemies in your path, while picking up items, weapons or tools to help you on your way.
If you succeed in grabbing Garu, each episode will end with a wild kissing scene to remember! The game features 3 Modes: Story, Score Attack and 2 Players.  Pucca’s Kisses Game is the perfect gift for Valentine sweethearts.

I wanna be loved by you just you!!

In your unstoppable pursuit of love, master the Wii Remote™ to go even faster when jumping or flying over obstacles and platforms. Jump into the Story mode for some fast and furious action: pick up a katana to defeat agile Ninjas, a pen to draw an escape route, a fan to make clouds and fog vanish…and even a towel to clean up dirty stains concealing your way out. Want more? Leap over hungry crocodiles and bad-tempered birds, defeat a bunch of tree-hiding monkeys, hurl shurikens at furious Ninjas, escape with an awesome delta-plane, and more!
Race through a total of 12 levels each more thrilling than the last. Tackle crazy mini-games, two game modes (Story and Score Attack) and much more. The rewind feature helps players of any ability overcome even the biggest challenges and keeps the action moving through the colorful cartoon world of Pucca.

For even more fun, each level ends with a bunch of brain-teasing mini-games, such as escaping from a crazy maze, putting the puzzle pieces back together correctly, finding craftily hidden objects and loads more. For determined players there’s no end to the challenges and rewards: try to beat your own records in the ‘Score Attack’ mode and replay the episodes of your choice endlessly.

The perfect gift for Valentine sweethearts
Pucca’s Kisses Game will be available for download via WiiWare™ for 500 Nintendo Points™ on February 14th, 2011.