On November 25thNintendo launched this years Holiday Mall Experience, affording opportunities to show off to shoppers the Wii U, 3DS, and the best software for each.  Last weekend I had the opportunity to visit the Natick Mall in Natick Massachusetts, one of twenty-three participating locations nationwide.  It was a fun day that allowed me to chat with some Nintendo employees, check out some of the season’s hottest games, and of course spread the word about Pure Nintendo. 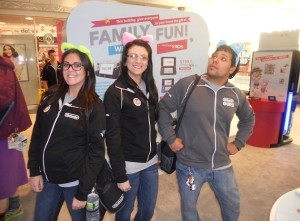 Seeing the Nintendo staff decked out in cat ears from Super Mario 3D World made me smile.  And it was fitting, as that was easily the most popular game at the event.  Even though it was running at multiple kiosks, all remained crowded during my duration there, never emptying even once.  Mario also proved to be the main choice with Nintendo staff when asked about personal favorites – Although initially diplomatic pointing out several titles, all eventually came back to Super Mario 3D World (with the new Zelda games running a close second.)  Speaking of which, The Wind Waker HD and A Link Between Worlds were both prominently displayed, and as expected, were quite popular

Other Wii U games drawing lots of attention included the wonderful Pikmin 3, and third party efforts like Disney Infinity, Just Dance 2014 and Rayman Legends.  On the 3DS side, new titles took center stage, like Mario Party: Island Tour and Pokemon X and Y.  The latter proved to be very popular – based on the street pass tags I got, the majority were playing Pokemon.  Older popular games were also available, like Donkey Kong Country Returns 3D.  Speaking of DK, my one big disappointment was that even though it was advertised, Tropical Freeze was missing in action. 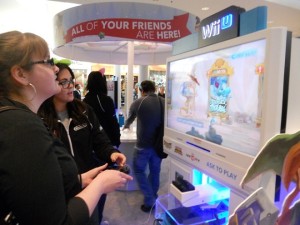 Talking with a few of the Nintendo staff, they admitted what we’ve long known – there is still some consumer confusion with the Wii U gamepad.  That said, the ‘taking the message right to the consumer with sampling events’ is a great approach, and any initial confusion does seem to disappear once the system is experienced firsthand.  The absence of any Wii products (including the recently released Wii Mini) may further help eliminate any confusion consumers may have.

Overall the event was a lot of fun.  I met some nice people, picked up some cool Nintendo merchandise, got double digit StreetPass tags from multiple regions (picking up some special pink puzzle pieces in the process!) and even had my picture taken with Mario.  I hope events like these will help add to the continued dominance 3DS is showing, and contribute to the momentum Wii U appears to be picking up.  Based on empty store shelves I’ve seen, I’m optimistic. 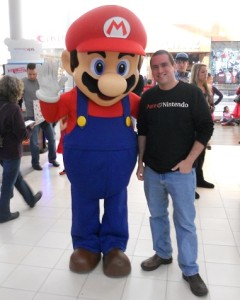