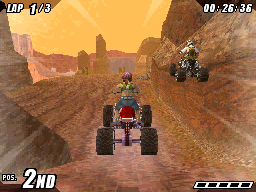 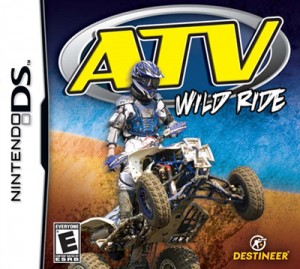 Renegade Kid, who is best known for his action/Shooter games like Dementium and Moon, has embarked on a new journey with his first ever racing game entitled. “ATV: Wild Ride.”

I was honored enough for Jool’s to let me check out the Beta version of his new racing games.

ATV: Wild Ride is a pretty straightforward ATV racing game. The level design is nothing short of magical. As what was told to me, there are many different varsities of levels/tracks to choose from, 25 to be exact. The controls a slick and easy to move, the game feels like a real ATV racing game in your hand. Something that has always blown we away about Renegade Kid games is the sound design. The sound in Dementium 1 and 2 really brought you into the game. ATV: Wild Ride does not disappoint when it comes to sound. The roaring of the engines, the sound of the wheels grinding through the mud, the variety of music, the whole sound experience of ATV racing comes bellowing from the DS speakers. 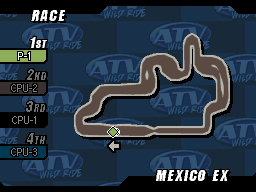 Over-all ATV racing is a pretty solid racing game on the DS. With its local multiplayer function; ATV: Wild Ride can keep you and your friends entertained on long road trips, or waiting in line for the 3DS.

I give ATV: Wild Ride two thumbs up.

I remember you saying something about Multiplayer options for ATV: Wild Ride. Did I just make that up in my head, or is it true?

What made you decide to make an ATV game?

Both Gregg and I have always wanted to develop an arcade racing game. Personally, I really enjoy games like Excitebike 64, Pure, Wave Race, and 1080 (N64), so those influenced our decision on the direction to go with our racing game.

What was your biggest challenge in making a racing game?

Finding a publisher! :) Beyond that, tuning the speed and turning of the vehicles, as well as the scale of the tracks. This was the first time we attempted a racing game, so we ran into a lot of first-time challenges, which made the development that much more fun! 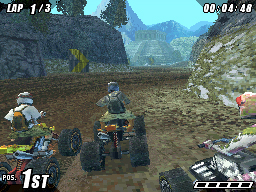 In college I took a few sound design classes..I have some respect for good quality sound design. How do you produce such good sound out of your games?

Well, thank you! I personally have a lot of respect for audio in games and movies. It can make or break everything. The music in ATV Wild Ride is courtesy of Gregg’s band, Swift Justice and the Hired Goons. I have been familiar with their music for many years, so when we decided to develop ATV Wild Ride it was the natural choice. The feeling that “real music” brings to the racing experience is just great, and exciting. It’s like when you’re driving your car and blast the tunes loud. On the audio effects side, I wanted the riders to sound like they’re having fun racing, so we opted for rider vocals when events happen, such as when a cool trick is performed or when someone slams into you. The key to make the vocals sound natural was to shout the vocals to emulate the reality of loud ATV vehicles traveling at high speeds so it sounds realistic and not sound like it was “recorded in the studio”. 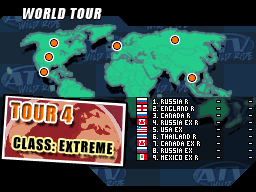 Tell a little about the different levels in the game. I remember it spans across the world.

Yeah, one of the aspects of racing games that I think is important is a variety of exotic locales. World Tour takes you to Mexico, England, Russia, Thailand, Canada, and the USA. I think each location really offers its own atmosphere. One of the key elements of this game is big jumps, so there are many large ramps that provide the opportunity to get some massive air and perform some cool tricks, which in turn earn you nitro that can be used to whiz by your opponents. 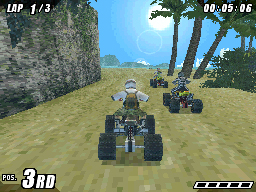 Thank you again for your time.