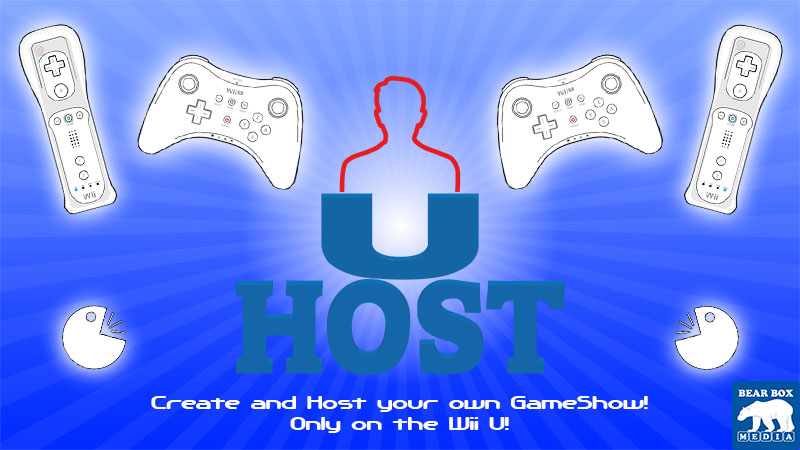 After last month’s exclusive reveal, Pure Nintendo sits down with U Host’s creator Andy Ford to find out more about the upcoming Wii U game.

PN: Since Pure Nintendo first revealed U Host last month, what kind of feedback have you gotten from players?

It’s been pretty overwhelming, really! The vast majority of people have been really positive about it, and I get the impression that they are completely embracing the idea. What makes me smile the most is when people put forward their own ideas, saying things such as “Wouldn’t it be great if you could make up your own questions!” or “Contestants should be able to steal points from each other” and I get to reply “That’s already in the game!”. I’ve only had one criticism, which was that this was a clone of Buzz. I’ve played Buzz only once before, but even from that I know that U Host is very different. Buzz was all about a quiz show, where U Host is a lot more Game Show focused with the inclusion of all sorts of mini-games. The Host can set up an entire Game Show that has no quiz questions at all, and is entirely made up of the mini-games. I explained this to that person, and they seem to be on-board with it now too!

PN: What has been the most challenging element to implement in the game?

Balance! Not just in terms of making the game fair, but also giving the Host as much control as possible, without completely cluttering up their GamePad. For a while, I didn’t let the Host change the category, for example, as I thought it would give them too much control over the game. I asked people for feedback on Twitter, and everyone wanted to be able to do that if they wanted to. I therefore decided to make as many things optional as possible. After all, I want people to truly feel as though they’re able to make their own Game Shows. I’m currently adding in a feature that allows the Host to give out extra points at the end of a mini-game if they feel bad for one of the players. Sort of like a consolation prize. Entirely optional, of course!

I want the Host to be able to play through the entire game without looking at the TV once. 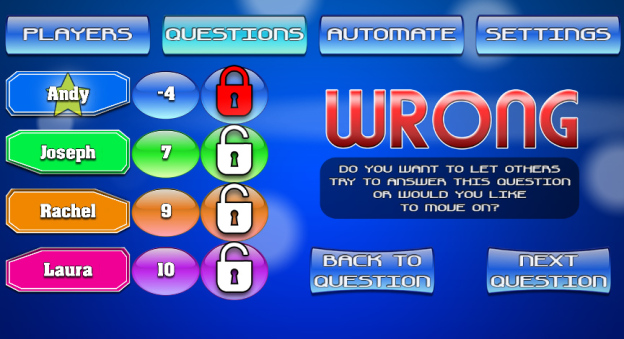 PN: You’ve mentioned a free app being developed that people can use as a buzzer – can you share any more information on this?

I’m starting to get a little anxious about this feature, actually. I really don’t want to give readers the wrong impression, or expect something amazing from this very basic app. As you know, U Host can be played without the use of any extra controllers, including some of the mini-games. Once I’ve submitted U Host to Nintendo, I’ll be starting work on a small app for mobile devices that will act as their own personal buzzer. When they touch the screen, 2 things will happen. The device will light up or flash, and it will make a sound. The app will come with a variety of sounds to choose from, but the colors will be limited to those available in U Host. The app will easily be ready in time for U Host’s release, and is entirely optional, just for fun, and, as you mentioned, FREE!

PN: U Host seems like the ideal multiplayer game, yet you’ve promised a solo mode as well.  Can you expound on that a bit?

The solo mode allows an A.I. to take on the role of the Host, and let it choose the questions, award points, penalties, awards, and even play through the mini-games. This mode is mainly in place to allow players to test out their Game Shows, and see what it’s like from the contestant’s point of view. I contemplated adding in A.I. Players, but shortly after implementing a basic version, realized that it simply wasn’t as fun as I wanted it to be.

One of the unique things about U Host is, as the player, at some points you stop playing the game, and start playing the Host. Of course the reverse is true. In the Higher/Lower mini-game, you have to try to put the cards in an order that will be hard for the players to predict. You lose that when you’re playing a computer. They’re usually good at everything, or bad at everything. I may add in computer players at some point in the future, as I toyed around with having them good at certain categories, but bad at others, and good at some mini-games, but again, bad at others, but I found it less fun. At its heart it’s a multiplayer game… but if it’s a highly requested feature, I’ll be happy to do my best to give the players what they want.

PN: Do you have any DLC planned?  Is it dependent on sales?

I don’t like DLC, generally. I know we’re in an age in which I could very easily sell people extra questions, or even something as useless as extra color schemes… and it will be hated, but a small minority will buy it, and it will become “worth it” from a developer point of view, but I don’t want to go down that route. I prefer to think of simply releasing free updates to my games that include additional content. In this sort of game, adding extra questions and mini-games should be a very easy process, albeit time consuming. If players let me know that they feel as though something is missing, I will see what I can do about it. Of course, the more sales I get the more time I can dedicate to updates, so in many ways it is dependent on sales. 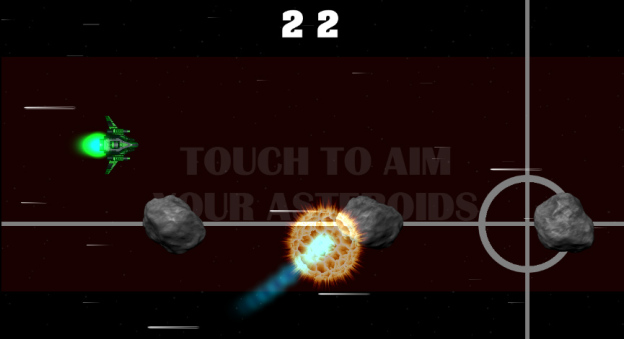 PN: Even though they’re very different genres, are there lessons learned from Internal Invasion that you’ve applied to U Host?

Internal Invasion taught me the current limits of the Nintendo Web Framework. As you may know, it was originally developed as a mobile app, but when Nintendo showed interest, it was ported over. In order to get it to run, however, incredibly I needed to actually scale things back a massive amount, and even remove certain features! It struck me as completely bizarre that my phone could play something with ease that the Wii U struggled with. My second lesson was that I should really focus on making games that are unique to the Wii U’s strengths. Sure, Internal Invasion could theoretically be played on anything from a PC to a mobile phone, but U Host? Maybe in combination with a Vita it could be played on a Playstation, but that requires 2 separate consoles. The Wii U allows you to play games in a completely new way, and I really want to explore that!

PN: Have you settled on a price yet?  And will the game launch in other regions in 2014, or just North America?

I haven’t as of yet! I’m really thinking it over, comparing it to games with a similar amount of content, or similar genre, but I’m still scratching my head. I’m currently edging toward a $12.99 price… but I’ll be sure to let you know when I make a final decision! Initially, the game will be released in America and Canada, and I eventually plan to release it in the UK. If the game does well in these regions, I will start to translate the game for others. I would love to release in Australia, but their rating-board costs are ludicrous! Independent developers often need sales before they can release in countries other than the Americas, unfortunately.

PN: Is there any new information you can share with us prior to the game’s launch?

I’m making a Blok Drop U mini-game, which developer, RCMADIAX has kindly granted permission for me to do, and I love it! I’m trying to put a bit of a spin on the mini-games based on other Wii U games, but this one is just something special. As you are likely to know, in Blok Drop U, the intention is to get the red block to land safely, and not fall off the level. In this game, the opposite is true. The game starts off with a tower of blocks, with the red block at the top, and each player takes a turn in choosing which block is removed from play. Whichever player causes the red block to hit the ground first loses and the other players all win. It’s quite nerve-racking trying to decide which block will be safe for you to choose, but at the same time make the following turn harder for the next player. 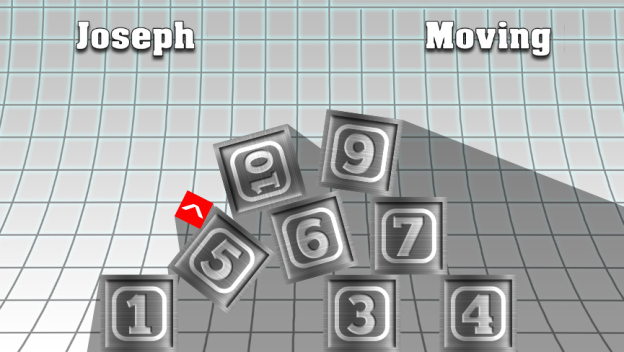 PN: There are a lot of big games releasing in the holiday quarter.  Why is U Host one to keep an eye on?

I’m determined to get it out by Christmas, as that’s when all the families get together to enjoy each others’ company, catch up, eat crazy amounts of food, and play games. I like to compare it to Wii Sports, for example… One thing that was true about Wii Sports was that anyone could play it. We’d have friends and family over and end up playing Wii Golf with people of all ages. I want that same thing to happen with U Host. It’s a very easy game to pick up and play, you don’t need super fast reactions to do everything, and it’s not one of those multiplayer games that is limited by the number of controllers you have. I love Smash Bros to bits, one of my all time favorites, but back when I first got it on the original Wii, I only had 2 controllers, so there was a lot of taking turns. I imagine the next Smash Bros will be another system seller, and not everyone will be picking up 4 controllers from the get go!

In essence, I want to make a great game that is accessible and has a long life span. I think U Host might suit that ‘want’ perfectly!

PN: I’d like to thank Andy for taking time to chat with me, and sharing additional information about U Host with Pure Nintendo!