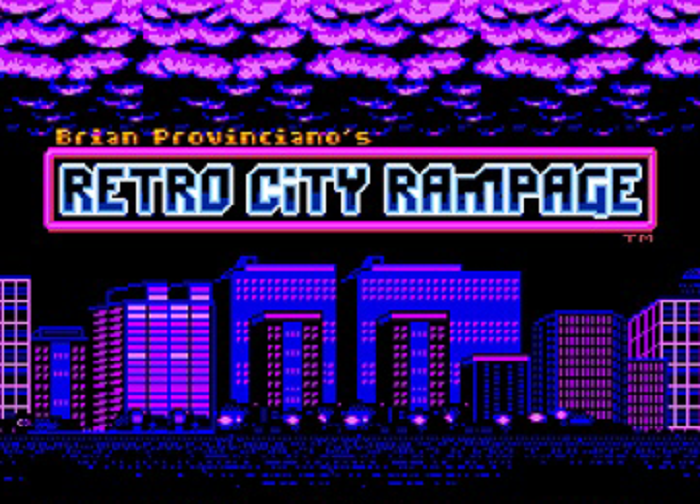 It was my recent pleasure to talk with Brian Provinciano about Retro City Rampage, which will be arriving in the 3DS eShop this holiday season.

Pure Nintendo: To begin, could you share with our readers just how much work on Retro City Rampage was done by yourself alone? If I were to give you a full credit introduction, how would I properly identify you? Brian Provinciano is the ___________ of Retro City Rampage?

Brian Provinciano is the developer of Retro City Rampage, doing everything from design and programming to art, business and production. He later enlisted the help of an additional artist and three talented composers to wrap things up.

PN: What made you decide to bring Retro City Rampage to the Nintendo 3DS?

It’s been on my mind for a while but I was pretty exhausted from porting to the previous platforms. However, I did always feel like part of the market was missing by not having it on 3DS, especially with the success on PS Vita. Things finally just lined up and it felt like a good time to do it.

PN: You previously released the game on the Nintendo Wii. What advantages does the 3DS eShop have over WiiWare?

The 3DS has far more active users, while WiiWare’s become a ghost town. RCR was only able to move 1.5% of its total units sold on Wii. The 3DS eShop also makes discoverability much easier.

PN: What do you think of the 3DS hardware overall, both as a game designer and as a player?

I really do love the 3D aspect, especially how some games end up looking like miniature dioramas. I love that. It would be very fun to take advantage of the 3D in a game, although being such a small team, I’m very conscious of schedule and how much to bite off for each project now.

PN: Retro City Rampage has been well received in portable form on the Playstation Vita? Do you anticipate even bigger success on 3DS given that it has such a larger user base?

It’s really hard to say. Hopefully it does well, but I really have no idea. It’s very well suited for portables, being a pick-up-and-play experience, and the install base on 3DS is quite significant, but the big question will be how much it appeals to the majority’s demographic, and how many of those with 3DS systems frequent the eShop. Fingers crossed.

PN: Will the game be a straight port, or do you plan on taking advantage of 3DS features?

The 3DS version’s required more work than previous versions, primarily because of there are so many differences, but the aim is to boast 100% of the same game, just altered to work best with the system. The game screen needed to be cropped much more to avoid characters being too small. This means tweaking/tuning every single mission/cutscene to account for less of the screen being visible. I also needed to move the HUD and UI elements to the second screen and reformat text and fonts.

I haven’t nailed down any other features just yet but will be adding touch screen functionality for sure. I’m exploring using it as a right stick for dual stick shooting, as a weapon select and for an interactive minimap. I’m not a fan of flow breaking minigames, so I’ll see what makes sense.

PN: Will 3DS version include ROM city rampage like WiiWare version did? Are there any other extras planned?

The plan is for it to include everything that the previous versions do, and possibly new things. I have many ideas for additions that I’ve had for future open world games, so I’ll see if any of those can make it into this. It all comes down to the schedule.

PN: What has it been like working with Nintendo?

Working with Nintendo’s been great. When I first started my own company around 2009, they were the most approachable and the first I became licensed for. Their WiiWare initiative was really great and got a lot of things right.

PN: Many small developers have expressed how much better Nintendo has been to work with in recent years. Is that something you’ve noticed yourself? In what ways has Nintendo improved?

I’ve always had a great experience with Nintendo, even four years ago, but they’ve definitely removed barriers and made things easier in recent years. There were a lot of old policies and ways of doing things which took them a while to adjust, but they finally gained momentum thanks to the hard work of people internally at Nintendo, listening to feedback from developers. They’d been working on these improvements for years, but sometimes things can take a while for various reasons.

PN: As an “Authentic 8-bit experience” Retro City Rampage reflects a fondness for the NES era. Can you elaborate on what the NES meant for you, and how it shaped you as a game designer?

The first game I remember playing is Super Mario Bros. The NES was the coolest toy around when I was growing up. Even after the SNES came out, I bought more NES games because they were more affordable, so I enjoyed the system for quite a while.

PN: Is there anything  that you could reveal exclusively to PNM readers?

I’ll be watching the PAX attendees play the 3DS version of RCR and taking notes to help make it the best port possible. Everything’s still quite up in the air.

Anyone who grew up in the ‘80s and ‘90s should give it a try. The previous versions have been played and enjoyed by hundreds of thousands of players, shown by their leardboard scores, so I’m incredibly happy to see that so many others feel the same nostalgia that I do. For those who have the game already, the 3DS may include some new features, but regardless, it will provide another way to play on it the go.

A big thanks to Brian for sharing news about Retro City Rampage 3DS with Pure Nintendo!