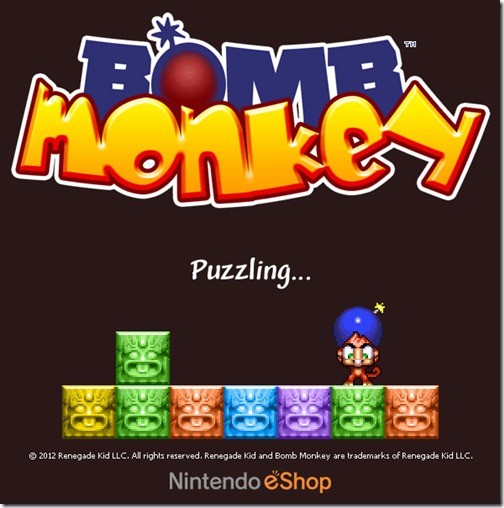 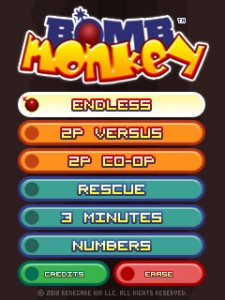 Bomb Monkey may not rejuvenate the puzzle genre but it sure is trying to. Let me start with the best and most intriguing part of Bomb Monkey, 2 player simultaneous play. You play Bomb Monkey by holding the 3DS like a book. This way you use the circle-pad to control the Monkey by moving it sideways and down for tossing bombs. When playing co-op your opponent holds the 3DS on the other side, using the Y,X,B,A buttons and the top screen, to control their Monkey. You can go head to head (literally) with friends, or an enemy, (I do not judge) or play 2 player co-op and see yourselves bomb your way to the top of the scoring mountain. Besides co-op Bomb Monkey offers four other single player modes. Endless Play is where the player bombs away until they can bomb no more. In Rescue Mode, the player tries to free a fellow caged monkey by hitting the cage, 50 times, in order to free the trapped monkey. There is a 3-minute drill where, the player has three minutes to gather as much points as possible. The final game mode adds a little more strategy with numbers. The goal of Numbers is simple. Explode the corresponding number spheres, in order, without going out-of-order. What really sets Bomb Monkey apart from the typical, destroy the constant rising blocks games is some of the different monkey wrenches thrown into play. As the floor rises with constant boxes, the Monkey is faced with a random configuration of colored boxes and bombs. These boxes are tossed into the growing tower of boxes. There are a few strategies but it is good to keep in mind that bombs will be more effective thrown into a cluster of same colored boxes. Also, some boxes are covered and locked with a chain that must be blown up twice to make it disappear. Keep those two things in mind when placing your boxes. The bombs aren’t unique to the fact that they actually act like bombs. Make sure you toss the bomb below before it blows up in your face and the monkey is left lying on the ground while the blocks rise higher. There are a few more strategy elements tossed into the game, but I will leave that for you to figure out.

Bomb Monkey may be over-looked by some hardcore puzzle gamers, but it’s full of the uniqueness and entertainment that we expect from Renegade Kid. Plus, when you win your head-to-head matches you can pound your chest in victory—Ok, last Monkey and Bomb pun.