Developed by Team Ninja and published by TEMO KOEI America, Dead or Alive Dimensions brings its fast paced action to the Nintendo 3DS.

To be blunt, Dead or Alive is a very solid fighting game brought down by a few bugs. Dead or Alive is visually impressive and handles very well.  Comparing it to the only other 3DS fighter I know, Street Fighter IV, Dead or Alive feels and controls the best. The movements and actions of the characters flow together like water and executing character combos seems natural. To help make the transition to handheld, Dead or Alive Dimensions offers simplified controls. There really is only four buttons used, punch, kick, block and grab. The simple controls make it easy for anyone to pick up and play, which is nice for players like me. Do not let the simple controls fool you though. What separates the causal fan from the hardcore fan is the ability to stream together timely combos and counters.  I am sure the hardcore Dead or Alive fans understand what I mean by that.

Dead or Alive Dimensions offers a variety of different game modes. The story mode brings in a stunning visual performance but is brought down by poor voice acting and dubbing. Which really drove me crazy.  The online mode works very well but does not bring anything new to the table, which is ok. If you are like me and become tired of getting your butt handed to you online, you can return to practice your skills in the practice mode or in survival mode which puts your skills to the test against a constant wave of opponents. There are a few more interesting modes that appear as you play trough the game. I will leave that up to you to find. 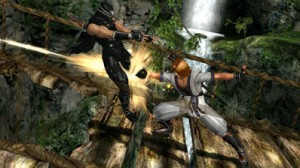 The most pleasant part of Dead or Alive: Dimensions is the wonderful, fully interactive environments.  There is something magical about beating in the face of your opponent with a backdrop of a nice rushing waterfall; then throwing them off a bridge into a creek below while you continue to show no mercy. I found myself at times enjoying the scenery of the environment rather then the scenery of the fighters.

Dead of Alive Dimensions is the first 3DS game that the 3D did not do too much for me. The game seemed to play better and look better in 2D rather than 3D. To me the 3D effects seemed simple and weak. 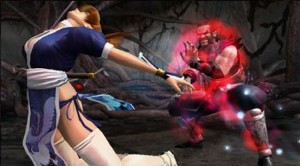 After I retreated from playing the annoying story mode, I really enjoyed Dead or Alive: Dimensions. I can go on the record to say it is the best fighter on the 3DS. If you are a fan of the series, this is a must buy for you. Even if you’ve never played a Dead or Alive game before but are looking for a great fighter on the 3DS, I would recommend this game.