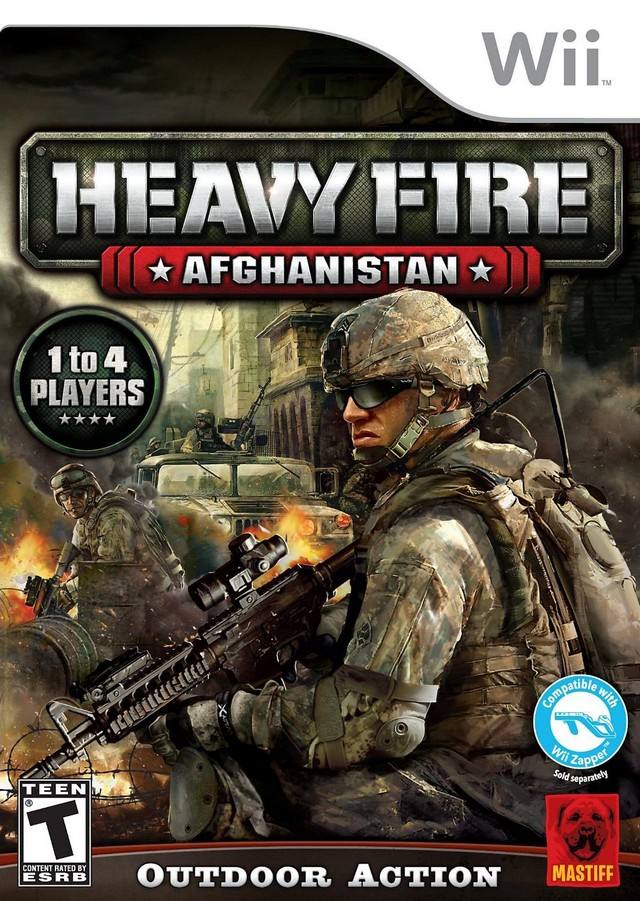 Heavy Fire: Afghanistan is a fast-paced on-rails shooter that is based in modern-day Afghanistan. Players utilize weapons ranging from rifles, handguns, mounted guns, and grenades. Players also have the ability to jump onto the guns of tanks, trucks, and helicopters.

The first thing you may notice about Heavy Fire is the graphics. How can I put this lightly? The graphics for Heavy Fire are nothing more than N64, and may make your eyes bleed. It is hard to miss all the blocky structures that we grew up loving with the N64; things like mountains, and even the “round” zip rope that is used to repel out of the helicopter, are blocked in structure.

With graphics aside, which is a lot to put aside, the game is a good on-rails shooter. Heavy Fire is the first Wii game since Resident Evil: Chronicles, that I pulled out the Wii Zapper and enjoyed playing it. Heavy Fire is a quick paced, arcade, on-rails shooter that works perfectly with the Wii Zapper. With the ability to play up to four-players, the game could be a good Wii party game.

Heavy Fire does have a story, even though it is a predictable format. In the story, the protagonist has always dreamed to join the military. His dream is finally faced as he heads to Afghanistan, once again in present day. The story is told by voice over before each mission as the protagonist talks about the struggles of his tour.

Since Heavy Fire is on rails, it has few controls to learn. Like most arcade, rail-shooters, the player can use the directional pad to hide around different barriers, and pop out to place the deadly shot. Along with those controls, the player uses the Z button to toss grenades. Along the lines of most arcade shooters, players must shoot boxes of life and ammo to help keep themselves alive.

Looking passed the graphics, Heavy Fire: Afghanistan is a really solid arcade shooter. For those of you who grew up going to the arcade with your dads, Heavy Fire will be full of nostalgic moments. Maybe this game would be a good Holiday game to bond with your father…if shooting people brings your family together over the holidays.